Going into a stacked Phase Two, it was inevitable for the Marvel Cinematic Universe to expand too fast for its own good. Between a cosmic offshoot in last year’s audience favorite Guardians of the Galaxy and throwing everything but the entire kitchen sink at us a few months ago in Avengers: Age of Ultron, there’s no perfect time than now to reel the universe-building back a bit. Enter the Ant-Man.

As Marvel 12th feature film, Ant-Man is the next piece of the ongoing elaborate superhero puzzle. In 1989, the brillant scientists at Pym Tech are close to cracking their founder Hank Pym’s (Michael Douglas) off-the-books shrinking technology. Concerned with the tech falling into the wrong hands, Pym resigns himself to retirement, doing all he can to protect his lifelong project.

Fast forward to present day, petty criminal Scott Lang (Paul Rudd, Anchorman 2: The Legend Continues) is freed from prison, struggling to provide a stable living and child support for his young daughter. Tipped off about a huge payday, Lang and his criminal buddies break into what they don’t know is Pym’s house and steal the Ant-Man suit. Lang is clueless about its importance, believing he stole a useless motorcycle suit. Turns out the tip set was set in motion by Pym, who needs the thief to infiltrate Pym Tech and steal the prototype for an upgraded micro-suit.

Ant-Man is in fact Marvel’s first ever heist film. Just like Captain America: The Winter Soldier masterfully broke new ground at tackling a superhero political thriller and Guardians of the Galaxy was an overnight success at delving into the space opera genre. Slick to its bone, Ant-Man is always on the move, never playing the bloated tunes we come to know as of late from the Marvel Cinematic Universe. Wheras our heroes are always fighting for screentime in Avengers: Age of Ultron and a little less so in Guardians, Lang’s journey from small-time thief to overnight superhero is linked together with nearly two hours of non-stop kinetic energy.

Think of Ant-Man like the first Iron Man movie from 2008 – straightforward, grounded (for a Marvel movie that is) and a surprisingly good time. Then combine that with the comedy of last year’s Guardians of the Galaxy. Granted there’s no wise-cracking raccoon or Robert Downey Jr. breaking out quips every other line. But Rudd still manages to bring plenty of comedic talent to the film that works hand-in-hand with the screenplay he helped to write.

With comedies like Bring It On, The Break-Up and Yes Man under his belt, Peyton Reed keeps Ant-Man light on its toes. Though the quirkiness of Edgar Wright’s early involvement in the project remains evident throughout. Fortunately, there’s no signs of a Frankenstein’s monster coming to life with two potentially juxtaposed visions set in place. Wright’s departure from Ant-Man has had its vocal naysayers. But Reed exceeds expectations by picking up the pieces.

Except for a short cameo by one of the Avengers midway (which ties into Captain America: Civil War), the rest of the cast is fresh to the Marvel Cinematic Universe. Rudd brings plenty of heart to the film and Douglas (who doesn’t do many mainstream films) feels right at home. Much of Ant-Man hinges on the solid chemistry between the two as mentor and student, locking down the middle section of the film. Evangeline Lilly (The Hobbit: The Battle of the Five Armies) is thrown into the mix as Pym’s daughter Hope. She given a limited purpose with a slightly underwritten role, but remains serviceable to the overall plot.

In the same vein of any Marvel origin story, Ant-Man teases what this part of the Cinematic Universe has to offer. The “Honey, I Shrunk the Superhero” vibe is ever present, but Lang is put to the ultimate test a bit too late when squares off against another by-the-numbers Marvel villain in Corey Stoll. It comes down to being a copy and paste of Jeff Bridges’ role in the first Iron Man.

At first glance, the concept of Ant-Man may seem to be a bit silly to be taken seriously. Even the characters throughout the film poke fun at it, struggling to even say the name with a straight face. Regardless on any initial misgivings, Ant-Man is a breath of fresh air in the Marvel Cinematic Universe, which is only getting bigger and bigger by the day. 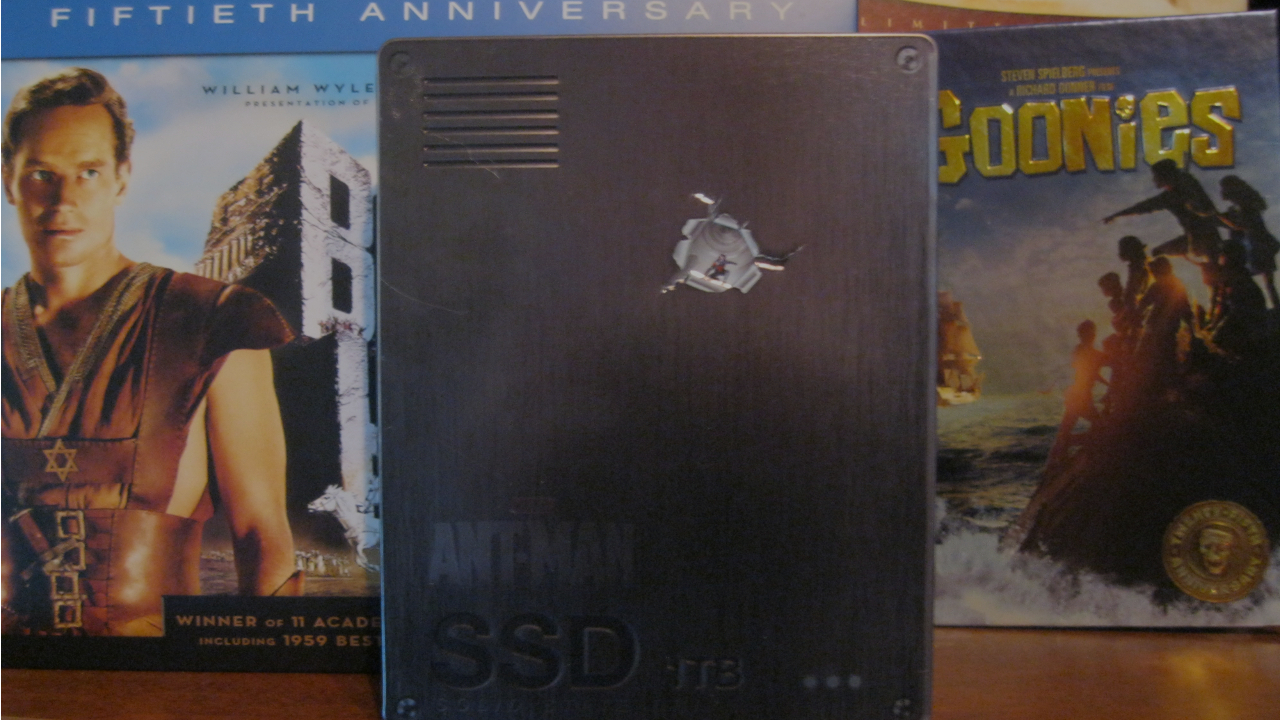 Buena Vista Home Entertainment delivered another strong addition to its lineup with Ant-Man. Framed in 1.85:1, Ant-Man offers an array of beauty from its heavily detailed micro adventure to the much larger action set-pieces. Rudd’s Ant-Man suit is ever popping, full of reds and detailed in many close-ups. Night scenes, particular during Scott’s first major heist and the climactic battle between Ant-Man and Yellowjacket also stand out.

Like its previous MCU film, Buena Vista delivers the goods once again with the lossless DTS-HD Master Audio 7.1 track. Christophe Beck’s magnificent heist score is greatly highlighted here. The audio tracks never overpower, even during the major action sequences. Dialogue is crisp and coherent, holding up well from the theatrical experience.

Ant-Man’s only shortcoming comes to a limited amount of supplemental material. The audio commentary from director Peyton Reed and Paul Rudd offers the most out the supplements. The rest of the content totals up to less than an hour, which includes several featurettes and about 10 minutes worth of deleted and extended scenes. The preview for Marvel’s Phase Three and Captain America: Civil War is not available on the disc. Instead viewers will have to access Disney Movies Anywhere to watch the footage.

Marvel Phase Two Wraps Up with Super 'Ant-Man' Going into a stacked Phase Two, it was inevitable for the Marvel Cinematic Universe to expand too fast for its own good. Between a cosmic offshoot in last year's audience favorite Guardians ...
0
Average User Rating
0 votes
Please sign in to rate.