For 22 years, Ghost in the Shell has been the gateway for many western audiences into the vast world of anime. Besides 1988’s iconic Akira, it’s been said to fall down the rabbit hole of anime initiated simply by the best of the best. While it may seem like a leap of faith for the uninitiated, the payoff is a richly crafted, thought-provoking exercise like no other.

Set in 2029 Japan, the world has evolved into a network of cybernetics. Some beings nearly consist of all mechanical parts minus a consciousness (or ghost). That little fragment is all that remains of one’s humanity. Hence the title – Ghost in the Shell. Major Motoko Kusanagi (voiced by Atsuko Tanaka) is one of these cyborg. Alongside her security team, Section 9, she is assigned to capture a hacker known as the Puppet Master.

The elusive Puppet Master has instrumented chaos on the network. In the midst of the cyber terror, the Puppet Master has managed to hack the consciousness of garbageman, providing the Major and her partner Batou (voiced by Akio Ōtuska) with a potential clue. It just one of the mysteries director Mamoru Oshii makes his audiences for along the course of Ghost in the Shell.

Oshii’s Ghost in the Shell is clearly a film before its time. The same goes for its source material, a 1991 manga series by the same name. And without this groundbreaking anime, what would sci-fi staples such as The Matrix and Avatar be inspired from? On countless occasions, Ghost in the Shell toys more with the abstract rather than force-feeding its audience with such a direct narrative. Yes, it’s easy to watch Ghost in the Shell as a well-crafted mystery that fortunately doesn’t overplay its guns blazing action sequences. That last statement might be selling this anime a bit short.

What Kazunori Itō’s screenplay works wonders with is the anime’s deeper themes. The script begins to peel back the Major particularly, as a character. Throughout the film, she finds herself conflicted with reality, identity and the divide between man and machine. While there’s a “ghost” inside her, the Major undergoes a philosophical journey to determine an original human existence. Does it even matter? Do it matter that she thinks nothing of gender when stripping “naked” or wearing skintight gear? Like the overall theme of Ghost in the Shell, ambiguity is ever present. And in a frustrating sense either, but rather an enlightening one.

Ghost in the Shell doesn’t exactly answer the questions its audiences are expecting in its lightning-fast 82 minute run time. But don’t worry. There’s only two more films, Ghost in the Shell 2: Innocence, The New Movie plus shows Stand Alone Complex and Arise to venture deeper into the world of the cybernetic network. Think of it more as a brilliant tease to a much bigger world.

For anyone who’s grown up strictly on western animation doesn’t know the cinematic masterpiece they’re missing by not watching Ghost in the Shell. It’s quite the riveting experience that puts your brain on intellectual overdrive. But isn’t that the m.o. of any sci-fi gem? 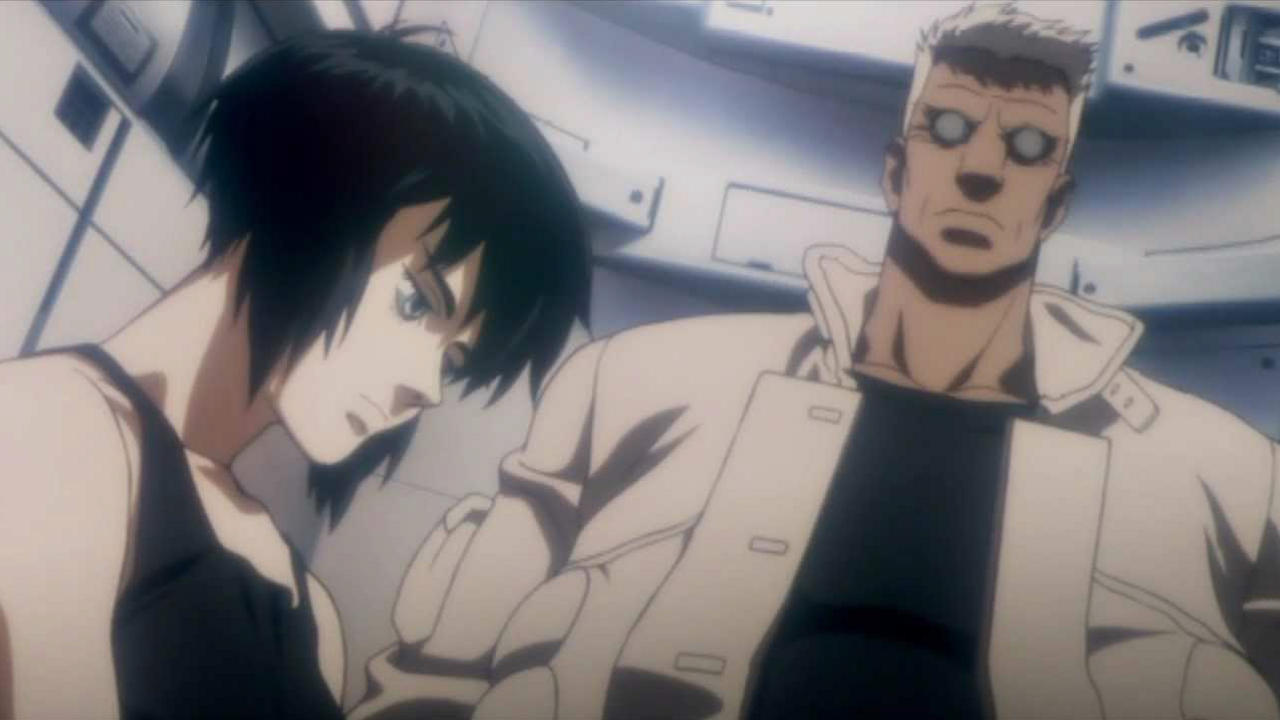 This Anchor Bay release looks rather decent with its 1080p transfer. Ghost in the Shell maintains its dated feel that functions alongside its cel animation. There is a 2.0 edition out in print that does touch up on some sequences with CGI. However, purists of the anime would rather prefer the original. There still remains a level of solid detail that defines characters and backgrounds throughout the film.

Ghost in the Shell offers two audio tracks. The dubbed English DTS-HD Master Audio 5.1 track is the preferred one for audiophiles. However, if you’re to truly experience the anime in its original form, the Japanese 2.0 track is the one to listen to. Regardless, dialogue remains coherent throughout. However, the car chases and shoot-outs don’t receive the maximum potential. It’s a sacrifice for purists to work with a traditional stereo track.

Sadly, there are no supplemental materials to go along with the film. With the live-action film due out in a few week, we might have expected some sort of promotion. However, the packaging is spectacular. Ghost in the Shell is housed in a gorgeous looking Mondo steelbook with the Major on the cover. The Mondo series have never disappointed in terms of artwork. This re-release is strictly for the die-hards of the anime.