After last summer’s disappointing Batman: The Killing Joke, one could only dream for DC Entertainment’s direct-to-video series to rebound on its next outing. In a complete surprise, Justice League Dark doesn’t just apologize for the last summer’s lackluster entry, but raises the bar being the best of the bunch since 2013 Justice League: The Flashpoint Paradox.

Justice League Dark wastes no time navigating through the realm of mystery and the occult. All around the world, demonic monsters are impairing people’s judgments. A mother looks at her infant child and sees a terrifying monster instead. The same goes for a father, who holds his family at gunpoint when wrongfully viewing them as demons. From Washington D.C. to Metropolis to Gotham City, Batman (voiced by Jason O’Mara), Superman (voiced by Jerry O’Connell) and Wonder Woman (voiced by Rosario Dawson) are forced to intervene. Sometimes the situation is alleviated, whiles others end rather tragically.

Batman suggests to the Justice League to investigate on the streets rather than just fly over them. That places him on a mission to track down superheroes more suitable than the typical headliners. Enter John Constantine (voiced by Matt Ryan), an occultist con-man, who knows his way around the supernatural. Powerful magician Zatanna and the comedic, possessive spirit Deadman join the cause to get to the bottom of this latest outbreak of demons.

For the uninitiated, Justice League Dark is wowing spectacle with quite the haunting undercurrent. Like Marvel’s Doctor Strange this past fall, we’re entering the realm of magic and continuously expanding the limitations of where the genre can go from here. Batman might be the bridge here between the Justice League and the Justice League Dark. But even for the bat-detective, he’s just a bit out of his league. Director Jay Oliva restricts the Caped Crusader more to the background during action sequences, allowing the likes of Constantine and Zatanna to shine.

Ultimately, Justice League Dark is anchored by Constantine’s charismatic presence. By bringing in Matt Ryan, who starred on the cancelled NBC series Constantine, we have ourselves a superb voice talent who nails the cynicism and occasional wit with great precision. In 75 minutes, this gateway to the occult side of DC balances the new characters and new elements with ease. Justice League Dark has a major checklist, especially if the DC Animated Universe desires to explore these characters and situations even further in future films. The question remains, who wouldn’t want more John Constantine, Zatanna and Deadman coming back for a round two or three for that matter?

What’s most refreshing about Justice League Dark is that it’s a mystery rather than overblown action sequence after action sequence. Oliva lets the film unfold at its own pace as our heroes attempt to discover who and what is behind the demons. We even witness the importance of the House of Mystery (a spooky house always on the move) and the Dream Stone (a powerful artifact dating back 500 years).

Justice League Dark also happens to be DC’s second R-rated animated film. While The Killing Joke pushed the envelope with its violence, language and adult situations, Justice League Dark pushes the dial ever so subtly. A few edited moments in its introduction would’ve scaled it back down to the typical PG-13 rating.

Justice League Dark takes liberties with its more supernatural source material, but it emerges as a rewarding endeavor for those who have been on this New 52 roller coaster the past three years. For the first time ever, this New 52 timeline has went above and beyond. 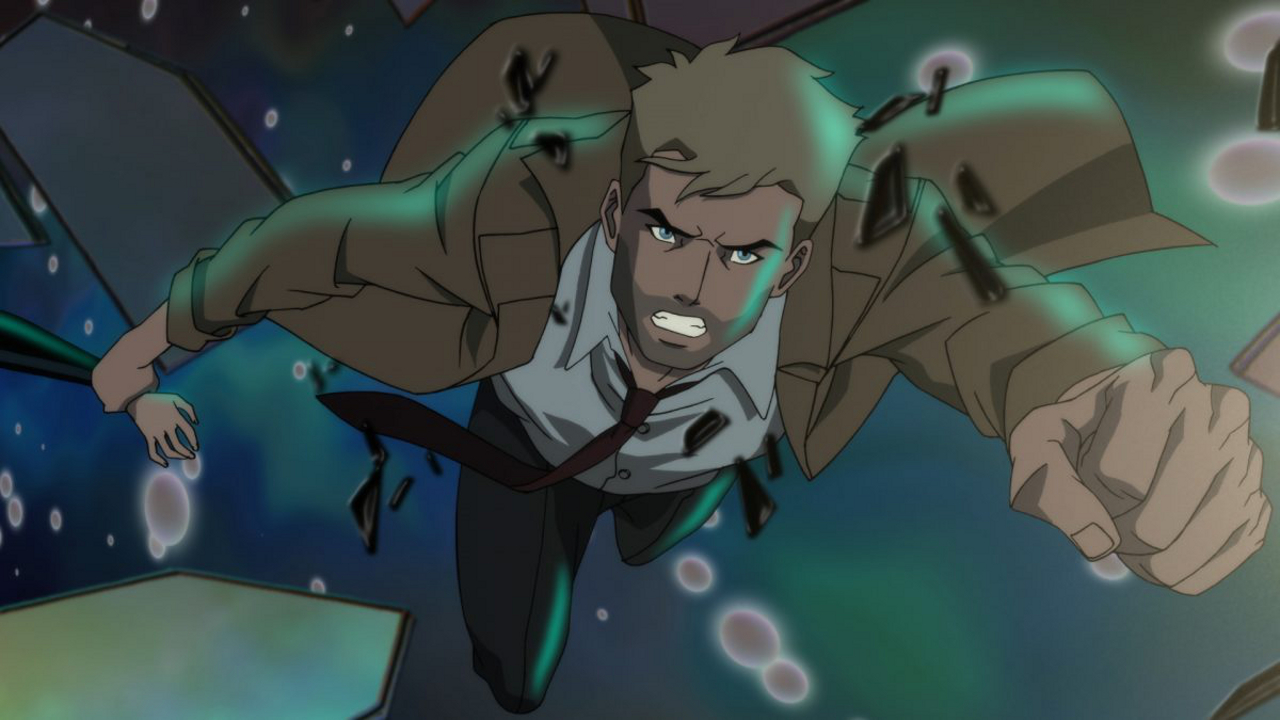 Previous DC Animated Universe films haven’t received the greatest transfers from Warner Bros. Home Entertainment. Issues with banding and aliasing have plagued movie-goers for years. Justice League Dark might not only be one of DC’s best films as of late, but also one of the best-looking ones as well. Its 1080p transfer is very clean and detailed. Black are solid and colors pop. Most of the film takes place at night or in dark environments, but that doesn’t hinder a fine-looking animated film.

Equally matched is the 5.1 DTS-HD Master Audio track. Dialogue is clear and coherent, which is always a standard for these animated DC films. Action sequences never feel too overpowered. There’s not much happening in the sound mixing department, but that’s more a film issue rather than audio one.

Justice League Dark is decently supplemented with extra content. Justice League Dark at New York Comic-Con 2016 is the clear highlight of the bunch with insight from director Jay Oliva and Constantine’s Matt Ryan. There’s also a preview for the upcoming 28th animated film, Teen Titans: The Judas Contract. And though omitted in the review, there is a featurette about Swamp Thing, who plays a pivotal role in the film.