‘Rogue One’ Fills In Some Missing ‘Star Wars’ History

Rogue One: A Star Wars Story is perhaps the most one-of-a-kind entry in the entire Star Wars cinematic canon. For four decades and seven episodes, we’ve journeyed to a galaxy, far far away, albeit through a narrow lens. Since the release of Star Wars (not Episode IV: A New Hope) back in 1977, we’ve witnessed the legacy of four generations of Skywalkers amidst the backdrop of a never-ending galactic war. In Rogue One, the universe’s best-known family takes a backseat to make room for a band of unsung heroes.

As the first of many Star Wars “Anthology” films on the horizon, Rogue One fills in the gaps the main series failed to touch upon. Rogue One’s general plot is no secret, dating back to the original film’s opening crawl. In short, rebel spies stole the Death Star plans during a victorious battle. The hows, whys and wheres are finally being addressed on a grand scale. While glossed over for many years, bringing this pivotal moment to the big screen is hardly a cynical endeavor. Rather, a necessary puzzle piece that raises the stakes and importance of the original film’s story.

Where Rogue One succeeds is amplifying the “war” back in Star Wars. While The Force Awakens brought Star Wars back in its audience’s good graces, the end result was still a safe retread for a new generation. Rogue One is stripped of all its security nets, focusing on moral ambiguity, a more grounded narrative and the ultimate consequences of war. Our heroes are conflicted by actions that aren’t exactly cookie-cutter black and white.

Felicity Jones’ Jyn Erso leads the charge throughout Rogue One. At first, the Rebel Alliance sees her nothing more than a link to her father, a vital Imperial scientist. But as the film progresses, this battle-torn young woman becomes the poster child for a full-scale attack on the Empire. She’s one of the few characters that Rogue One manages to flesh out. A sarcastic droid named K-2SO (Alan Tudyk) steal every scene he’s in and is more memorable than the rest of his human counterparts. Rogue One is an ensemble film, however the rest of the cast doesn’t quite reach that iconic status of a Han Solo or a Princess Leia. And while Rogue One winds up with an exciting climax that rivals the originals, the road getting there is riddled with some issues. Basically, it’s the B-team in an adventure focused more on moving the story from planet A to B than its characters.

Rogue One is a step in the right direction for future “Anthology” films. Clearly, it’s full of kinetic energy and with the intention of being part of a greater universe. From beginning to end, Rogue One took risks that we would’ve never expected from a Star Wars film. It’s the prequel that many fans of the franchise expected when The Phantom Menace was released back in 1999. Hopefully, this will challenge future franchise filmmakers like Rian Johnson (The Last Jedi) and Colin Trevorrow (Episode IX) to push the creative envelope even further.

For more of my thoughts on Rogue One: A Star Wars Story, check out my full theatrical review from last year. 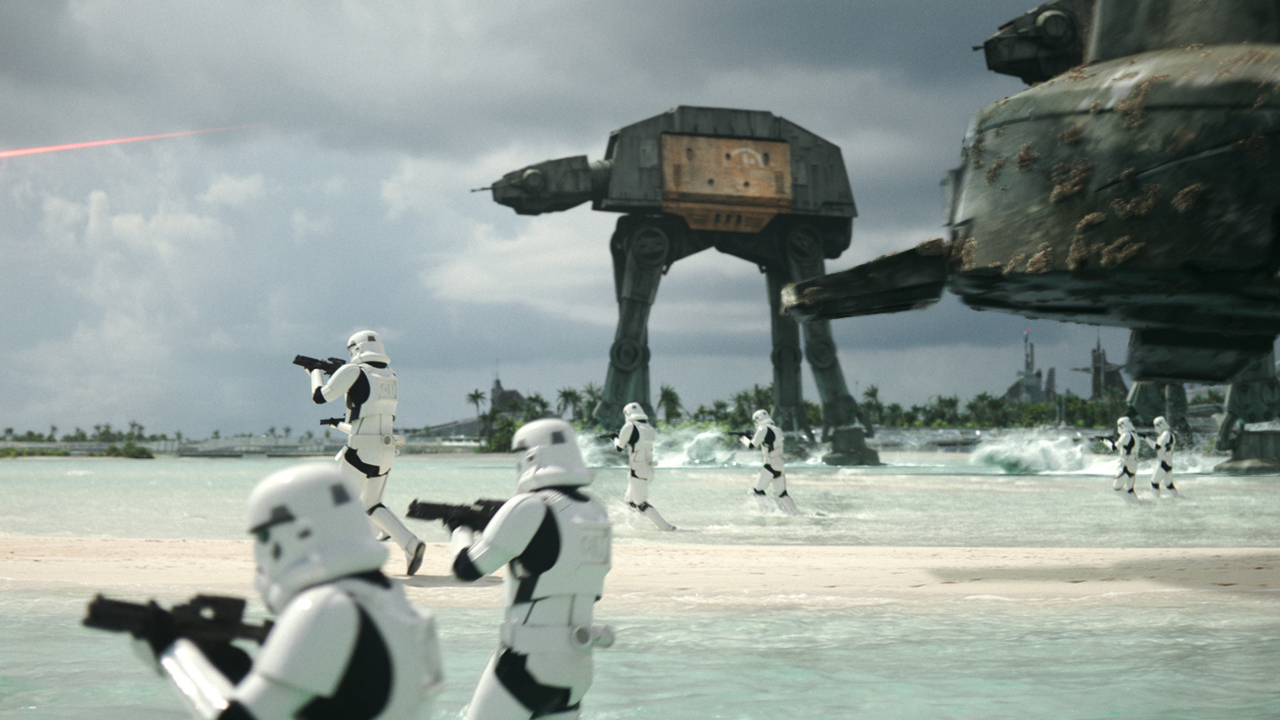 Whether it be from years at Fox or now at Disney, the Star Wars franchise has always received the utmost care when it comes to video and audio. Disney offers a stellar 1080p transfer for Rogue One: A Star Wars Story. The worlds within that galaxy, far far away have never looked better. Colors are on-point from start to finish. The opening confrontation at the Erso homestead is cold and muted. While, the last 45 minutes on tropical planet, Scarif burst full of energy as the Rebels charge the beaches. Small details on clothing and Imperial uniforms are paid close attention to as well. As Darth Vader would say, “Impressive. Most Impressive.”

Complementing the incredible video transfer is a top-notch 7.1 DTS-HD Master Audio track. With any Star Wars film, audio is practically half the film. Rogue One is predominantly action-packed and the audio transfer highlights that to the fullest degree. From minor planetary explosions to blaster fire, there’s not any sound that goes unnoticed. Dialogue is solid through. Michael Giacchino’s score is given plenty of distinctive attention, though it’s not quite tonally iconic as a John Williams track.

If the Blu-ray release of Rogue One falls short, it’s with the supplements. Much of the extra material focuses on specific characters such as Jyn: The Rebel, Cassian: The Spy and K-2SO: The Droid. For those wondering about certain movie magic, The Princess & The Governor examines the return to two iconic characters. While all informative, it still just scratches the surface. Those who remember watching the supplements from The Phantom Menace DVD back in 2001 will sorely miss the potential of the detailed behind-the-scenes look at a Star Wars film. Also missing are deleted scenes, which director Gareth Edwards stated as plenty of fragments due to the film’s reshoots.