Back to Original Series Basics in ‘Star Trek Beyond’

In what was practically an unwritten rule, Star Trek Beyond needed to be a celebration of Star Trek. After 50 years on the big and small screen, the franchise has been an uneven road. We’ve witnessed the franchise at its greatest (Star Trek II: The Wrath of Khan), as well as moments we try to block out (the Star Trek: Enterprise finale for starters). Fortunately, Star Trek Beyond has found that middle ground to please Trekkies of old and newcomers more attuned to the J.J. Abrams’ soft reboot.

Beyond essentially brings us back to the Original Series, while maintaining the tone of the new timeline. Three years into their memorable five-year mission, Kirk (Chris Pine), Spock (Zachary Quinto) and McCoy (Karl Urban) are finally feeling like their counterparts. Granted, Pine hasn’t resorted to Shatner-style delivery. However, he’s stripped his youthful cockiness found in 2009’s Star Trek. A more seasoned officer, Kirk is finding the missions to be a tad episodic. He and his crew are quickly called back to duty to undertake a rescue mission. It’s nothing more than a trap, leaving Kirk and crew stranded on an alien planet.

Director Justin Lin (Fast and Furious) brings more action to the table for this 13th installment. In doing so, he sacrifices some of the real philosophical meat that Trek used to offer. Abrams did the same with Star Trek and Star Trek Into Darkness, gearing more towards a mainstream audience. While that may frustrate some of the die-hards, there’s still enough story to go around. Yes, the villain (Idris Elba) has the same motives as Eric Bana and Benedict Cumberbatch in the last two installments. But as it’s trying to be a glorified two-part episode on the big screen, it’s par for the course.

Star Trek Beyond isn’t as memorable as the last two J.J. Abrams films, nor is it anywhere near the classic Wrath of Khan. It’s still a fun, albeit poignant addition that brings new characters (Sophia Boutella’s Jaylah) into the fold and saying goodbye to old friends (Leonard Nimoy’s Spock and Anton Yelchin’s Chekhov).

For more of my thoughts on Star Trek Beyond, check out my full theatrical review from this past summer. 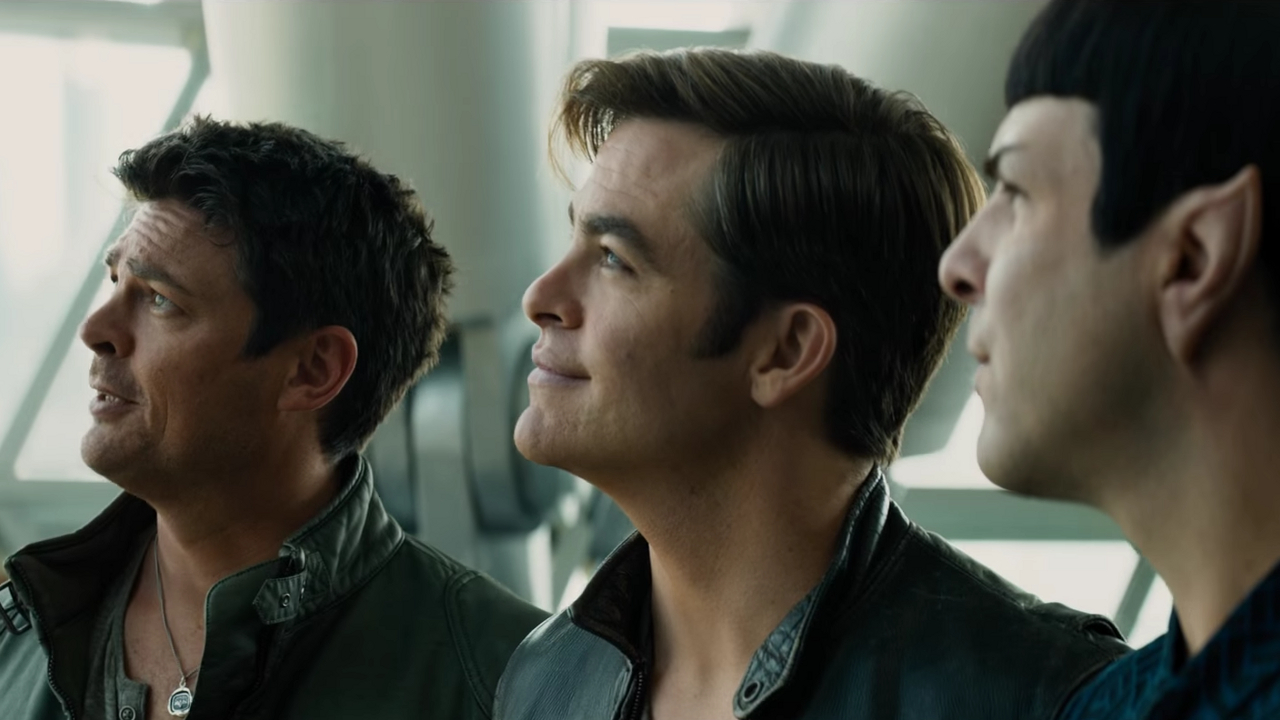 Paramount Home Entertainment has given us another solid addition with Star Trek Beyond. The film’s 1080p HD transfer satisfies being on par with the previous two films’ quality. Vibrancy is highlighted in the middle act when Kirk and his crew are being held captive on the alien planet. The black levels during the space sequences do hold up, though the rest of the colors are toned down a bit. It’s not quite murky, but a vast difference from when there’s more color present. Skin tones and Starfleet uniforms are detailed with care. Overall, it’s a welcoming visual experience.

Star Trek Beyond is certainly a film that demands an out-of-this-world audio track. And yes, Paramount has certainly given us one, highlighting its English Dolby Atmos track. Even with the vast numbers of audio effects throughout the film, the track never feels too powerful. Dialogue is coherent. Battle sequences in space and action sequences of the surface benefit the best. Phaser blasts, engine roars and utter destruction all sound crisp and well-balanced overall. And of course, Beastie Boys’ “Sabotage” is fantastic in all its glory.

Star Trek Beyond limits its supplemental material to roughly an hour. Beyond the Darkness is the longest featurette at 10 minutes, introducing Justin Lin to the Star Trek universe, divulging more info about the screenplay and Starfleet’s space station, the Yorktown. Deleted scenes are very minimal, only bringing a minute of new content. By far, the most touching featurette is the tribute to the late Leonard Nimoy and Anton Yelchin.