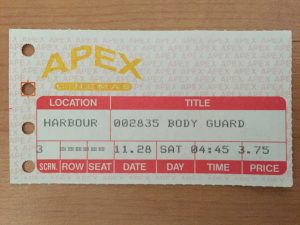 This weekend, the 25th anniversary of The Bodyguard falls on Saturday. It’s apropos because I saw it the Saturday of Thanksgiving weekend and it remains one of my most vivid moviegoing memories. I don’t know why this day sticks out in my head more than other more significant movies, but perhaps writing about it will help me figure it out.

I can’t say I remember the Thanksgiving dinner the two days prior, but time off from school was always a chance to spend more time watching movies, both in theaters and at home. November in Annapolis, MD was full on winter, and I can still feel the cold air passing my nostrils to my lungs, and the smell of crisp East Coast wind. 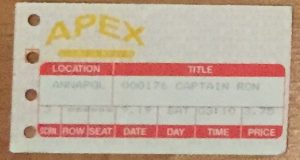 My best friend Tim had just turned 16 (he was over a year older than me) so we were just starting to go to movies on our own. The Bodyguard was not our first. I have ticket stubs from Singles and Captain Ron to prove it. The car he drove was his older brother’s jeep, a vehicle which itself was the source of many teenage cruising memories. Even with the roof and doors on for winter, the chill still got through. 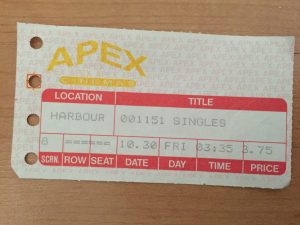 The Harbor IX movie theater was just over a year old at this point. It opened in the Spring or Summer of 1991. I suppose this is the point where it truly became my go-to theater. That first year, despite its state of the art projection and clean new auditoriums, I still had habits of going to Marley Station or Annapolis Mall. A senior from my high school was selling me popcorn (or more likely nachos, my then go to movie snack) and in two more years, I would go to work for Apex Harbor IX and be on the other side. It certainly became my home base then, since I spent at least six hours a day there (9+ on weekends) and came back to see movies when I was off. Here’s what it looks like today. It hasn’t changed much, though they’re putting in recliners and switched to digital projection a few years ago. 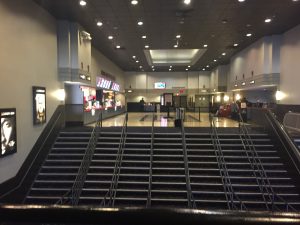 There was a third friend with Tim and I, Kay, because I going to a Saturday afternoon movie was the thing to do, holiday or not. Kay was also a frequent movie companion. She lived next door to me all my life, though we never attended the same schools. Looking back, both Tim and Kay saw a lot of movies they weren’t really interested in just because I wanted to. I’m grateful for the weekly companionship now more than ever.

The Bodyguard was something everyone wanted to see 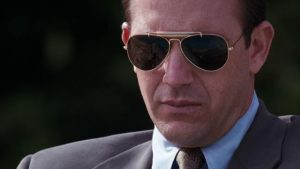 though. It was a big movie, Kevin Costner was on a roll (though I did not appreciate JFK until I went to film school and learned the technique Oliver Stone was using, and then grew up and lived through two wars myself so really understood Stone’s emotional perspective, if not historically factual one. This is a really long parenthetical on JFK.) It was the movie debut of Whitney Houston but not her acting debut (she played herself on Silver Spoons.) This was the movie to see, back when events were “this sounds good” as opposed to “I know that already.” 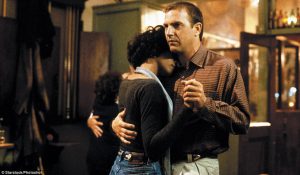 I’m not sure if the promise was romance or music or what but I know I was not expecting quite a thriller. I was impressed how the film showed Frank Farmer (Costner) fortifying Rachel Marron (Houston)’s estate from security vulnerabilities, and teaching her limo driver evasive maneuvers. This was at a time when I didn’t get much excitement at the movies outside of Summer, so it was a pleasant surprise. I remember where I was sitting in theater three watching the limo tires squeal (left side of center aisle a few rows from the front. Theater was sold out, that’s where we found three together). The suspense the film built as Rachel kept putting herself in positions where the stalker could get her and only Farmer’s anticipation could save her.

I remember the drive home from the movie, approaching dusk and therefore growing colder. Hmm, if the movie was 4:45 it would’ve already been dark when we left. I felt excited by the movie I’d just seen but already anticipated what else I had to explore at home on VHS. I can’t remember what I had recorded specifically, so obviously it wasn’t as memorable, but even then I was scanning HBO for new discoveries and setting them to record while I was out. 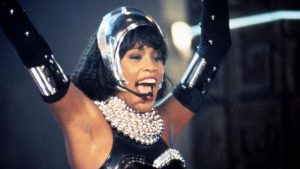 Of course, the soundtrack lasted longer than the movie itself. Tim and I listened to that cassette tape in the Jeep, in the school parking lot (yes, that’s high school Fred listening to movie soundtracks in the car in the parking lot), and I must’ve brought it into my parents’ car because where else would I play a cassette tape? On my Walkman too I guess. “I Will Always Love You” got the most play, being the beginning of the tape so easy to rewind back, and just being the best song. It couldn’t win the Oscar because it was a cover, but it was the signature song.

That’s where my vivid memories end, but 800 words isn’t bad. 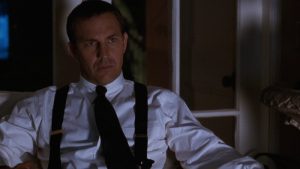 It feels different watching The Bodyguard now. You can’t go home again. I can’t be that excited teenager anymore, perhaps because I’ve seen The Bodyguard several times or maybe just because it’s now the norm that I watch whatever movie I want whenever I want to. Now it’s about appreciating a classic, although maturity gives me a new perspective. 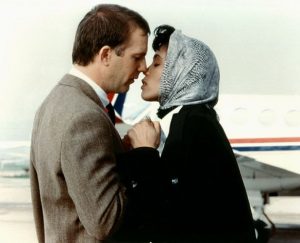 As a teen I wanted Farmer (Costner) and Rachel (Houston) to end up together. Now I see they slept together once and then argued about the conflict of interest for months after. So yeah, they have affection and nostalgia for each other but that’s not a relationship. And they survived a harrowing experience together so they’ll always be bonded, but a movie two years later would teach us relationships based on intense experiences never work out.

How groundbreaking was it in 1992 that there was no mention of the black/white thing? That was Costner’s insistence to just play them as characters. It was the right call. Costner was ahead of media representation there. 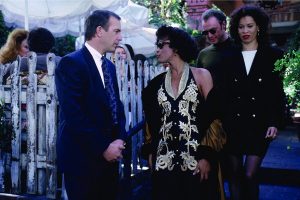 Of course The Bodyguard is bittersweet to watch now that Houston is gone. And it’s especially poignant in an age of brutal social media harassment. One girl asks Rachel for an autograph and photo. Today it would be hordes of Instagrammers crowding her for selfies. The artifacts of the industry are nostalgic now, like the giant 3/4″ video tape for concert playback. It’s all tiny digital files now. 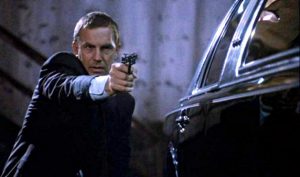 The Bodyguard is a suspense classic that never lets up. Now I have a bit more sophisticated an understanding of how it works. Writer Lawrence Kasdan and director Mick Jackson create the point of view of the stalker, whether it’s a car following Rachel or the hands of the stalker assembling notes from magazine articles. Likewise it captures the sensory overload where everything could be a threat, from the glare of a camera to the sound of glass breaking. God, it must be exponentially more aggressive with everyone’s cell phone. The climactic Oscar scene is a stunner and the finale is bloodier than I remember. 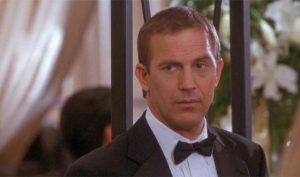 It always bothered me that Farmer was right about every threatening situation and yet Rachel always wanted to defy him. He’s like the Sheriff Brody of bodyguards. No one believes him until there’s a shark at the Oscars. By the time she got to the Academy Awards she should’ve given him the benefit of the doubt that if he said there was a threat, it’s not worth the risk. Now that I’m 40 I know this is true. No matter how many times you call it correctly, no matter how expert you’re proven in your given profession, no one listens to Farmer. 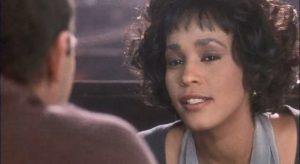 The Bodyguard deconstructs the cliches of the genre a bit. When Rachel guesses why Farmer’s alone, she guesses his love died and he couldn’t protect you. They let you think that a bit before they reveal it’s much more mundane than that. And that would’ve been an easy, lazy backstory to plug in for Farmer but Kasdan doesn’t settle. He earns it. It’s just the kind of guy Farmer is. There’s no one easy explanation.

The fake Oscars with made up actors is funny. In the ensuing 20 years, Oscar scenes used real actors as themselves. In & Out, Naked Gun 33 1/3 and Tropic Thunder were all comedies. I guess it’s harder to stage a dramatic fake Oscar scene with real actors. It’s glaring that none of these people are actual movie stars, but that’s ok. Robert Wuhl is the host. He could’ve landed that gig rising the post-Batman wave. 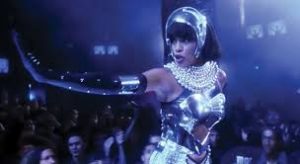 The Bodyguard is an even better movie than I remember. The pace ramps up frequently and it’s a how to for crafting an effective thriller. I’ll always remember the Thanksgiving weekend of 1992 and I may spend the rest of my days trying to capture a moment so pure. Probably when I have my own kids to take to the movies over the holidays.

Or, I could seek out a stage production of The Bodyguard musical. Yeah, that would be new and exciting. And Danielle Steers from Bat Out of Hell was in it, but I guess she won’t be in it anymore if she’s in Bat Out of Hell. Looks like I just found my next stop in the Bodyguard obsession tour. Here’s to another 25 years.