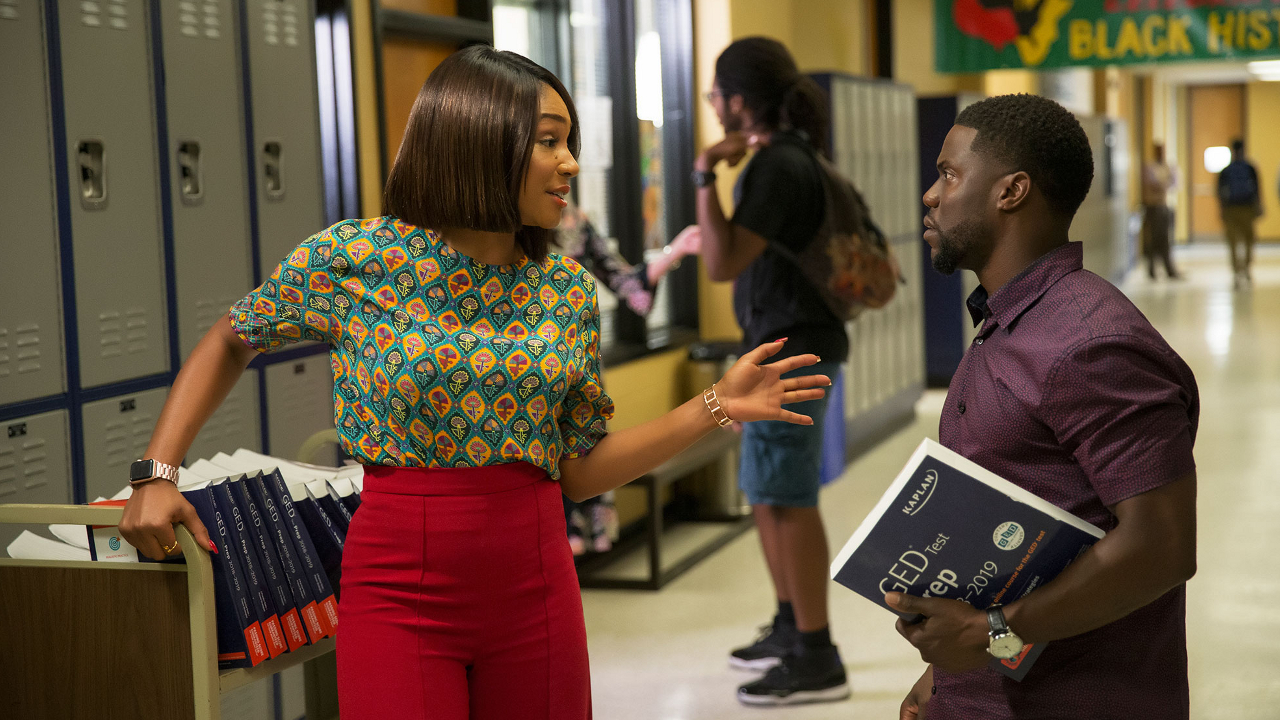 Kevin Hart and Tiffany Haddish had no problems reaching the top of the box office this weekend. Their latest comedy, Night School opened over the weekend with an estimated $28 million.

It was an odd choice to release Night School in late September. Typically in a month headlined by the horror and family genres, comedies rarely break out around this time. We’d almost have to go back to Rush Hour ($33 million) and Sweet Home Alabama ($35.6 million) to pinpoint those rarities. A $28 million opening for Night School isn’t bad. It’s just that Kevin Hart’s put up larger numbers in the past. Get Hard, Ride Along, Ride Along 2 and Central Intelligence all soared above a $30 million debut. Even with Girls Trip’s Tiffany Haddish, Night School seemed primed for success. The critics and CinemaScore audiences might be split, but without any upcoming competition, Night School could hang around. We’ll know by next weekend if Night School can pass $65 million.

September’s typically a strong month for animated openings and Warner Bros.’ Smallfoot was no exception. The animated Yeti film starring Channing Tatum, James Corden and Zendaya opened with $23 million. While no Hotel Transylvania or Cloudy with a Chance of Meatballs, Smallfoot opened on par with Open Season ($23.6 million) and Storks ($21.3 million). Sneak peek screenings a week ago helped generate buzz as did positive reception from both critics and audiences. Between a 69% on Rotten Tomatoes and “A-” CinemaScore, Smallfoot should be able to garner a leggy run. It’ll have at least two weeks until Goosebumps 2 challenges its share of the family audience.

After topping the box office last weekend, The House with a Clock in Its Walls was knocked down two spots to third in its sophomore frame. Off a 53% drop, the Universal family film starring Jack Black and Cate Blanchett made another $12.5 million. That’s a bit harder than fall family fare like Goosebumps (-34.3%) and Miss Peregrine’s Home for Peculiar Children (-47.6%). Both of those films went on to leggy runs. Even with the positive reception, The House with a Clock in Its Walls may struggle towards a 3x multiplier. With $44.8 million after 10 days in theaters, $75 million might be a realistic target.

While most holdovers took a heavy hit this weekend, A Simple Favor continues to defy expectations. Dropping two spots to fourth place, the Lionsgate thriller dipped another 35.6% this weekend. Only a seventh outing of Crazy Rich Asians (-34.6%) could rival the Anna Kendrick and Blake Lively flick. Grossing another $6.6 million, A Simple Favor has made about $43.1 million after three weeks. $55 million is surely possible, making it Lively’s best finish since 2011’s Green Lantern ($116.6 million).

Warner Bros.’ The Nun rounded out the charts this weekend. The fifth chapter of The Conjuring Universe fell another 45.5% in its fourth frame. Adding another $5.4 million over the weekend, The Nun currently stands at $109 million domestically. Leg-wise, The Nun seems to be playing more like Annabelle and The Conjuring 2, finally breaking a 2.0x multiplier. If The Nun play here on out like Annabelle, expect a finish around $115 million. A slightly leggier Conjuring 2 run pushes The Nun to about $117 million. Either way, The Nun will wind up as the frontloaded chapter to date, falling shy of a $121.4 million target.

Opening Next Week: A Star is Born, Venom, The Hate U Give (limited)