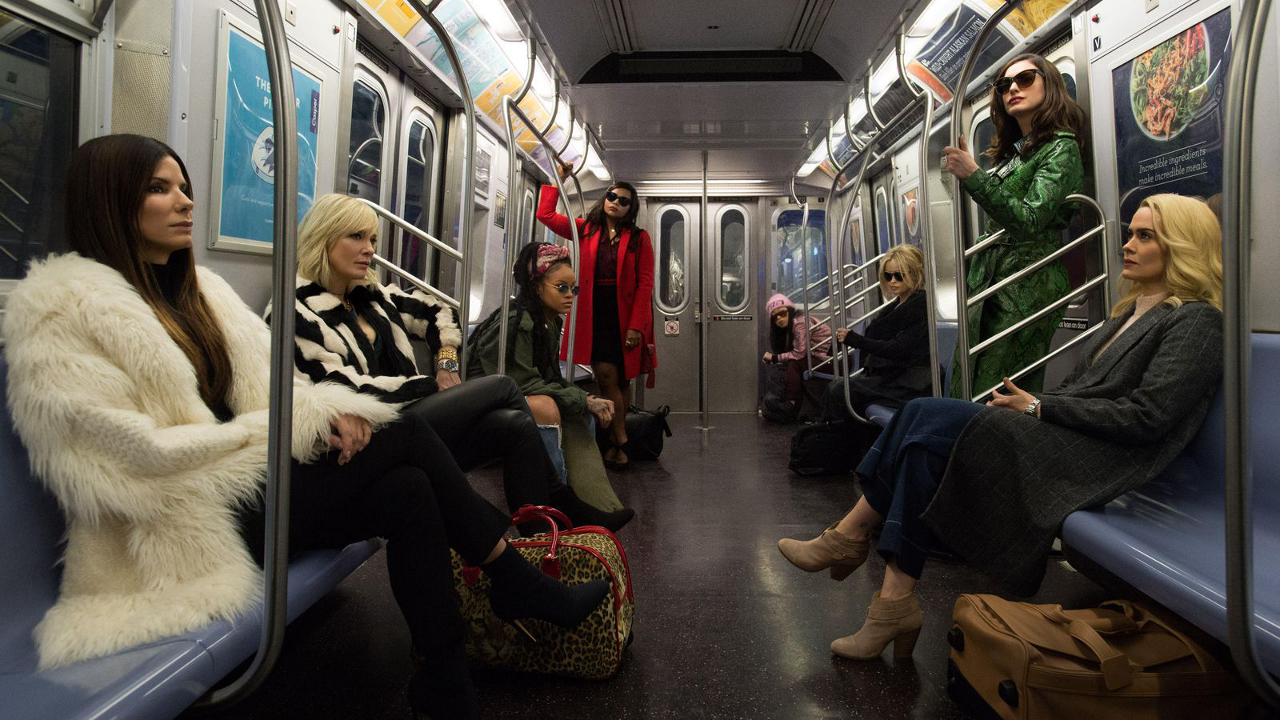 Warner Bros.’ heist ensemble, Ocean’s 8 became the latest top film this weekend, opening with an estimated $41.5 million. This would be the seventh straight weekend a franchise film would claim first place at the box office.

It’s been 11 years since the last Ocean’s heist with Ocean’s Thirteen. The box office hasn’t missed a beat. The female-led Ocean’s 8 is the franchise’s biggest opener. Though, adjusting for inflation it’s the weakest by a long shot. The first film opened to $38.1 million ($61.7 million today). Ocean’s Twelve debut with $39.2 million in late 2004 ($57.8 million today). Ocean’s Thirteen wrapped up the trilogy with a $36.1 million opening ($48.1 million today). Regardless of inflation, Ocean’s 8 is unquestionably a hit. A 67% on Rotten Tomatoes and positive B+ CinemaScore grade should fuel a solid run ahead. Ocean’s 8 could easily pull in $105-110 million if it were to behave like 2016’s Ghostbusters. Numbers could go even higher finishing closer to Ocean’s Thirteen.

After back-to-back weekends of top, Solo: A Star Wars Story dropped down to second place. The Star Wars spin-off eroded another 48.5% from last weekend, making $15.2 million. After three weeks in theaters, Solo has reached $176.1 million. By the start of next weekend, Solo should overtake A Quiet Place ($185.5 million) domestically. A $200 million finish is still in the cards as long as Incredibles 2 and Jurassic World: Fallen Kingdom don’t affect it that much. Right now, Solo is slightly ahead of both Godzilla and The Amazing Spider-Man 2. Those two films barely edged past the $200 million mark back in 2014.

Deadpool 2 also enjoyed its best weekend so far. Down one spot to third, the Merc with a Mouth dipped 41.1%, grossing another $13.7 million. After four weekends in play, Deadpool 2 has brought its total up to $278.7 million. Man of Steel continues to be the best comparison as it marches on to $300 million. For many films, the next two weekends will ultimately decide a few major milestones. As long as Deadpool 2 doesn’t fall apart with 55-60% drops, $300 million is almost certain at this point.

A24 broke a studio record this weekend. Its latest supernatural family drama, Hereditary debuted with $13 million, claiming the fourth place spot. That tops the debut of The Witch ($8.8 million) back in early 2016. While critics greatly praised the Toni Colette horror flick on Rotten Tomatoes with a 93%, the general audience went in the opposite direction. The abysmal D+ CinemaScore wasn’t surprising at all. A24’s The Witch and last year’s It Comes At Night score a C- and D respectively. The disconnect here between critics and audiences may cut Hereditary’s run short. A finish around $30 million may be in order. That would also be the studio’s biggest film outside of last year’s Oscar nominee, Lady Bird.

In what should be its final week in the top 5, Marvel’s Avengers: Infinity War rounded out the charts. Down 34.9%, Infinity War is starting to stabilize after seven weekends, pulling in its best holdover yet. With another $6.8 million in the bank, Infinity War crossed the $650 million milestone, becoming only the sixth film to do so. $670 million is still a possibility. Though we’ll have to see how Infinity War can hold against back-to-back weekends of Incredibles 2 and Jurassic World: Fallen Kingdom.