Since it’s announcement in 2014 and casting in 2015, the Ghostbusters reboot has been a hot button topic for the past two years. From its gender reversal to a record dislikes for its trailers on YouTube, controversy has surrounded Ghostbusters. The major question going into the weekend is whether or not it’s been justified.

Ghostbusters follows the story of the 1984 film by the same name as four female parapsychologists start a ghost-catching company in the Big Apple. Being a reboot, the events of the 1984 film and Ghostbusters II are non-existent in the new canon. Until now, there’s no iconic Slimer or Stay-Puft Marshmallow Man terrorizing the streets of New York. But the concept is the same. Kristen Wiig plays Dr. Erin Gilbert, while previous co-star Melissa McCarthy pairs up her as Dr. Abby Yates. They’re two authors out to prove the existence of ghosts. Enter the eccentric Dr. Jillian Holtzmann (Kate McKinnon) and Leslie Jones as Patty, who knows New York City. Together, they’re this generation’s Ghostbusters instead of Bill Murray, Harold Ramis, Dan Aykroyd and Ernie Hudson. Chris Hemsworth (Avengers: Age of Ultron) takes over for Annie Potts’ role as their receptionist.

Despite the months of negativity surrounding this film, audiences will still be interested if director Paul Feig can pull off this reboot. Feig has directed comedic successes such as Bridesmaids, The Heat and Spy. All three of those films were critically acclaimed. Ghostbusters appears to be another critic pleaser as well, currently sitting at a 74% on Rotten Tomatoes. The surprisingly positive reviews plus the lack of comedic competition could turn Ghostbusters into the first real comedy hit of the summer. We Live Entertainment’s Fred Topel even calls the film, “the movie of the summer.” 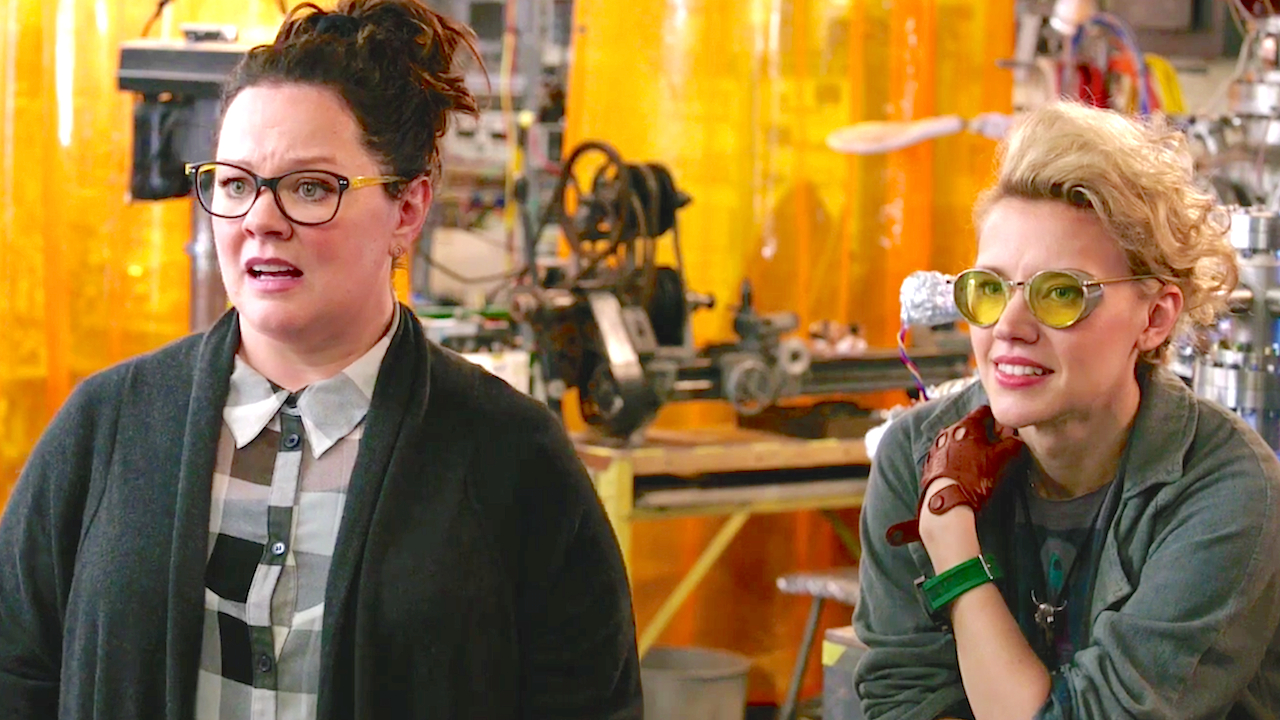 In the past few months, Ghostbusters has been everywhere. From video games to toys to the re-released Ecto-Cooler drink, the merchandising campaign has no rival this summer except for Pixar’s Finding Dory perhaps. Brand-wise, Ghostbusters should be Feig’s biggest opener of his career. In 2011, Bridesmaids modestly opened to a $26.2 million start, while holding up with some of the best legs of the summer. 2013’s The Heat brought together the star power of Sandra Bullock and Melissa McCarthy, debuting just above $39 million, albeit a slightly weaker finish than Bridesmaids. Last year’s Spy, while the most critically receptive of the three, dropped back to a $29 million start and barely broke $100 million.

Ghostbusters opens Thursday night in 2D, 3D and IMAX 3D engagements starting at 7 p.m. before expanding to almost 4,000 theaters on Friday. Despite being a wild card prediction early in the summer movie season, it’s easier now to project where the reboot could land this weekend. While The Secret Life of Pets will enjoy its second and final weekend on top, Ghostbusters could still be aiming those proton packs for an opening near $50 million.

'Ghostbusters' Won't Catch Top Spot This Weekend From 'Pets' Since it's announcement in 2014 and casting in 2015, the Ghostbusters reboot has been a hot button topic for the past two years. From its gender reversal to a record dislikes f...
0
Average User Rating
0 votes
Please sign in to rate.