Disney has been on a roll for the most part of 2016. From Zootopia and The Jungle Book both breaking out in the spring to over $340 million to Finding Dory setting the animated domestic record this summer, this has one profitable year. Disney is hoping to strike lightning once again with Pete’s Dragon.

Releasing Pete’s Dragon in August is an extremely weird situation as family films aren’t bread and butter of the final month of summer. In fact, outside of Teenage Mutant Ninja Turtles, one would have to go back to the two The Princess Diaries films for successful family film. As we learned earlier this year with The Jungle Book, Disney is fully capable of taking nostalgic source material and transforming it into something tangible for a new generation.

Like the 1977 film released by Disney, Pete’s Dragon retells the story of a young boy named Pete (Oakes Fegley), who is found in the woods befriending the dragon Elliott. The film also stars Bryce Dallas Howard, Wes Bentley, Karl Urban and Robert Redford. For audiences looking for a critically-acclaimed family film, Pete’s Dragon is certainly it. The film currently stands at 88% on Rotten Tomatoes. We Live Entertainment critics Scott and Ashley Menzel both praised the film. Scott deemed Pete’s Dragon “destined to become another timeless classic in the Disney film library.” Ashley called the film “stunning, both visually and emotionally.”

For all the praise, the only odd tidbit is that Disney will not be showing Pete’s Dragon for Thursday night previews. The film does open in roughly 3,400 theaters come Friday. Not having those extra showings Thursday night may hurt the overall box office this weekend as younger audiences are still not back in school for the most part. Expect Pete’s Dragon to open around $30 million. It’s not destined to be a super blockbuster, but still a satisfying ending to summer for Disney. 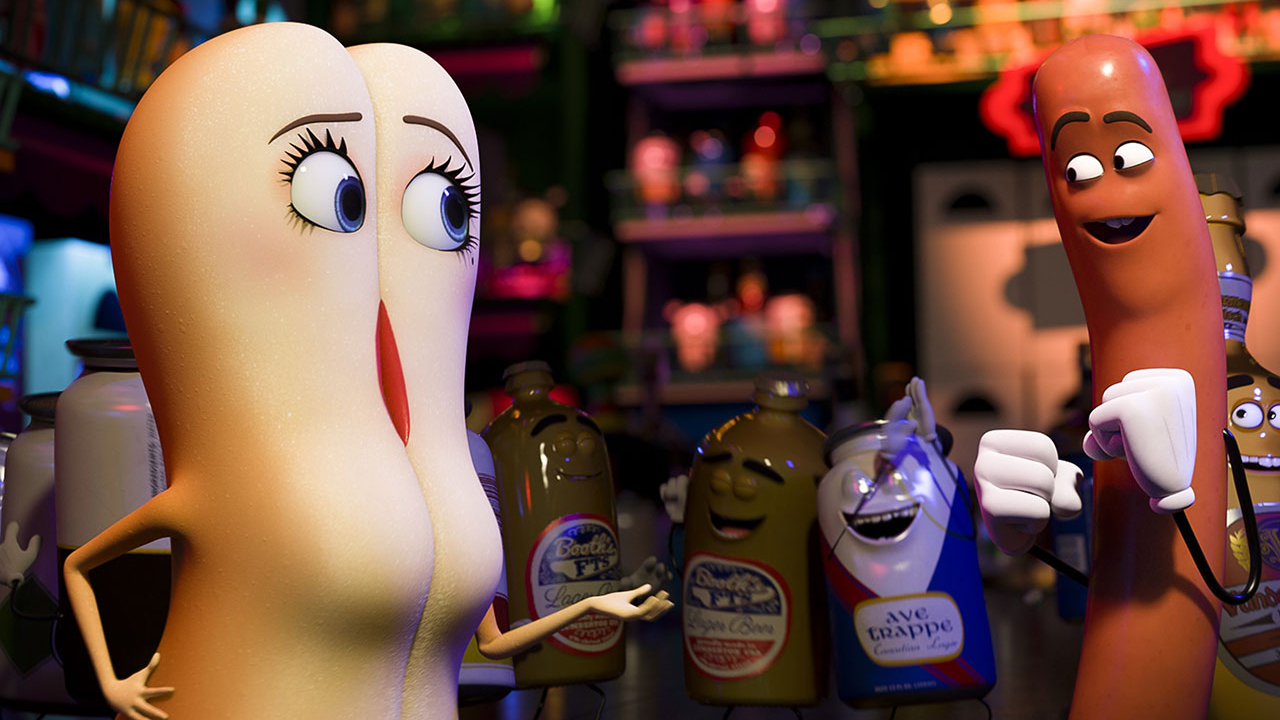 For more adult audiences this weekend, Sony is offering the raunchy food comedy, Sausage Party. While it’s one of 2016’s countless computer animated films, it’s without a doubt meant for the adults. In Sausage Party, all of the food in market is alive. We follow the sausage Frank (voiced by Seth Rogen), who is taken home after a day of grocery shopping. It’s all fine until he learns how violent humans can be, chopping and blending his fellow foods. Together with a hot dog bun (Kristen Wiig) and other foods, he wage war on the humans.

Despite its offensive adult nature, Sausage Party appears to be a hit with critics, currently sitting at 85% on Rotten Tomatoes. Granted, not all critics were pleased with the film. Scott Menzel caught a rough cut of Sausage Party at SXSW earlier this year was disappointed by the film, not enthused by this brand of humor. Ashley Menzel was also not a fan, labeling it “the death of comedy in America.”

Sausage Party will be interesting to gauge this weekend as raunchy comedies like Tropic Thunder and Pineapple Express have done decent numbers around this time of the year. Then again, it could be a Team America: World Police, appealing to such a niche audience. Sausage Party opens 7 p.m. Thursday night before expanding into about 2,800 theaters come Friday. A $15 million debut could be possible come Sunday.

In smaller release this weekend comes bio-pic Florence Foster Jenkins from Paramount. Academy Award winner Meryl Streep stars as a titular socialite who aspires to be an opera singer despite the lack of ability. This will appeal more to the independent film crowd than the mainstream audiences attracted to this weekend’s much larger releases. Even with positive reviews, don’t expect the film to crack the top charts this weekend. In about 1,000 theaters, expect a $4 million weekend.

Disney Set for One Last Hit This Summer with 'Pete's Dragon' Disney has been on a roll for the most part of 2016. From Zootopia and The Jungle Book both breaking out in the spring to over $340 million to Finding Dory setting the animated...
0
Average User Rating
0 votes
Please sign in to rate.