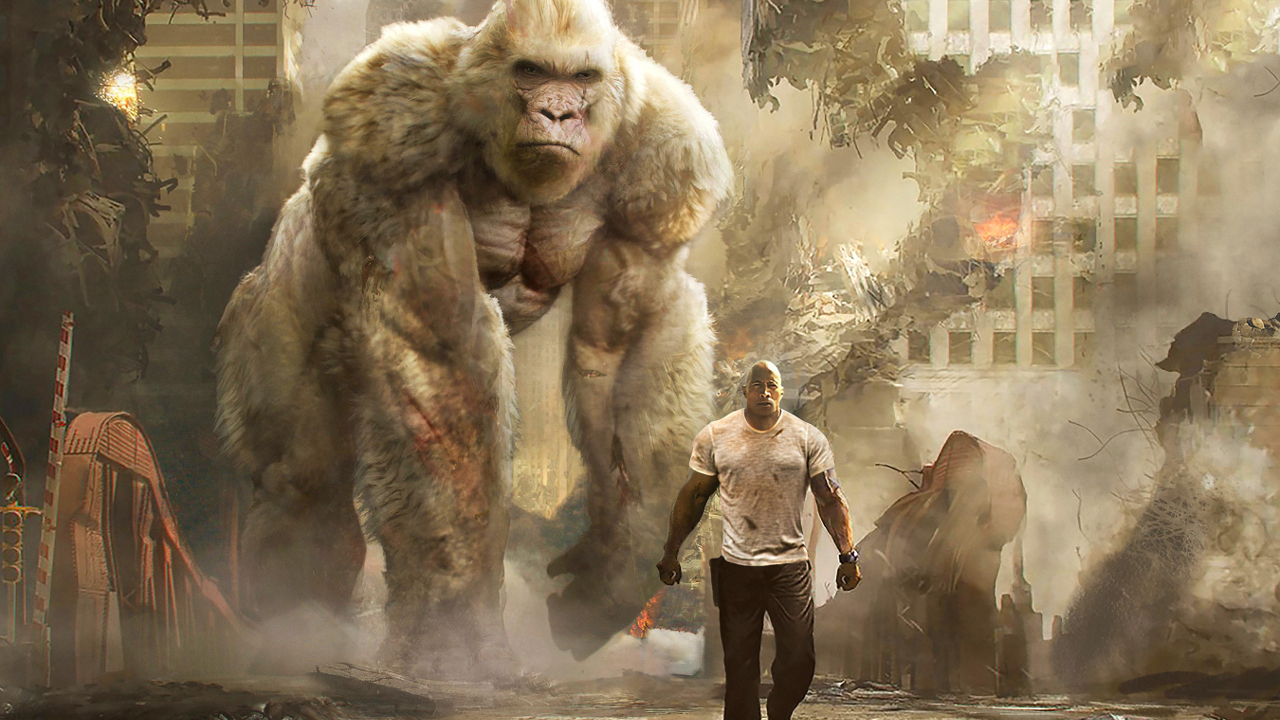 In a very close weekend, video game adaptation Rampage edged out A Quiet Place this weekend to take the top spot this weekend. The Dwayne Johnson action flick debut with an estimated $34.5 million.

Warner Bros.’ Rampage had a decent start on Friday the 13th and for a while there it seemed Paramount’s A Quiet Place would repeat for a second straight weekend. A solid 20.3% jump on a Saturday and a 34.9% dip on Sunday earned Rampage the top spot. It would be on-par with Dwayne Johnson’s last opening Jumanji: Welcome to the Jungle ($36.2 million). Though by no means should we be expecting a 10x multiplier. The best-case scenario for Rampage would be a run around $100 million. With the exception of last year’s Baywatch, Johnson hasn’t missed the century club since 2014. We’ll have a better idea of where this run will be heading next weekend before Avengers: Infinity War arrives to dominate the box office. At least critics were mixed on the film, scoring Rampage a 50% on Rotten Tomatoes, while audiences were more receptive with an A- CinemaScore.

For the second weekend in a row, A Quiet Place made another major statement dropping an impressively solid 35.1%. Paramount certainly has a success on their hands as A Quiet Place grossed another $32.6 million over the weekend. That wasn’t enough to reach the century mark in 10 days, but it will undoubtedly jump the milestone on Monday. Then again, Paramount may have went with a conservative estimate. Nevertheless, A Quiet Place will become the fifth film of 2018 to pass $100 million. Unless there’s some scenario where Super Troopers 2 or I Feel Pretty start picking up momentum, we may see the John Krasinski thriller back on top of the box office. We should also factor in the Rampage holdover as well, which could play more like a regular sophomore drop. A Quiet Place is gunning for a finish well above $150 million at this point.

With A Quiet Place continuing to defy box office expectations, Blumhouse’s Truth or Dare found itself with a mediocre third place opening. The critically-panned horror flick opened with an okay $19.1 million. For recent Blumhouse horror standards, that’s a bit on the low end. Recent studio releases such as Split ($40.0 million), Get Out ($33.4 million), Happy Death Day ($26.0 million) and Insidious: The Last Key ($29.6 million) all were met with much more demand. Leg-wise, it’s not expected for Truth or Dare to be a heavy player in the coming weeks. Critics weren’t thrilled with the film, scoring a 15% on Rotten Tomatoes. The same goes for CinemaScore. Audiences graded the horror film a less-than-average B-. A $40-45 million finish may be the ceiling.

This weekend was a double-edged sword for Warner Bros. While Rampage squeaked past A Quiet Place, it may have cost the studio’s other big hit, Ready Player One. Taking the fourth place spot, the Spielberg flick took a 54.5% hit this weekend, grossing $11.2 million. Losing lucrative IMAX screens to Rampage didn’t help matters. Right now, Ready Player One has made $114.6 million, which for the time being makes it second-biggest film of 2018. A Quiet Place is expected to claim that spot sometime next weekend. Regardless, Ready Player One will still wind up being a major win for WB and Spielberg, ending its run around $135 million.

After a decent $20.5 million debut last weekend, Universal’s Blockers fell two spots to fifth place. The John Cena comedy dropped 49.9% over the frame, bringing in $10.3 million for its sophomore take. After 10 days in theaters, Blockers is sitting around $36.9 million domestically. That’s slightly ahead of Warner Bros.’ Game Night ($33.2 million), but that lead is expected to be cut short with weaker legs ahead. With Super Troopers 2 due out this Friday, Blockers could take another hit shortening its chances of cracking a final run over $55 million. That would be Cena’s worst run since his WWE-produced films, The Marine ($18.8 million) and 12 Rounds ($12.2 million).