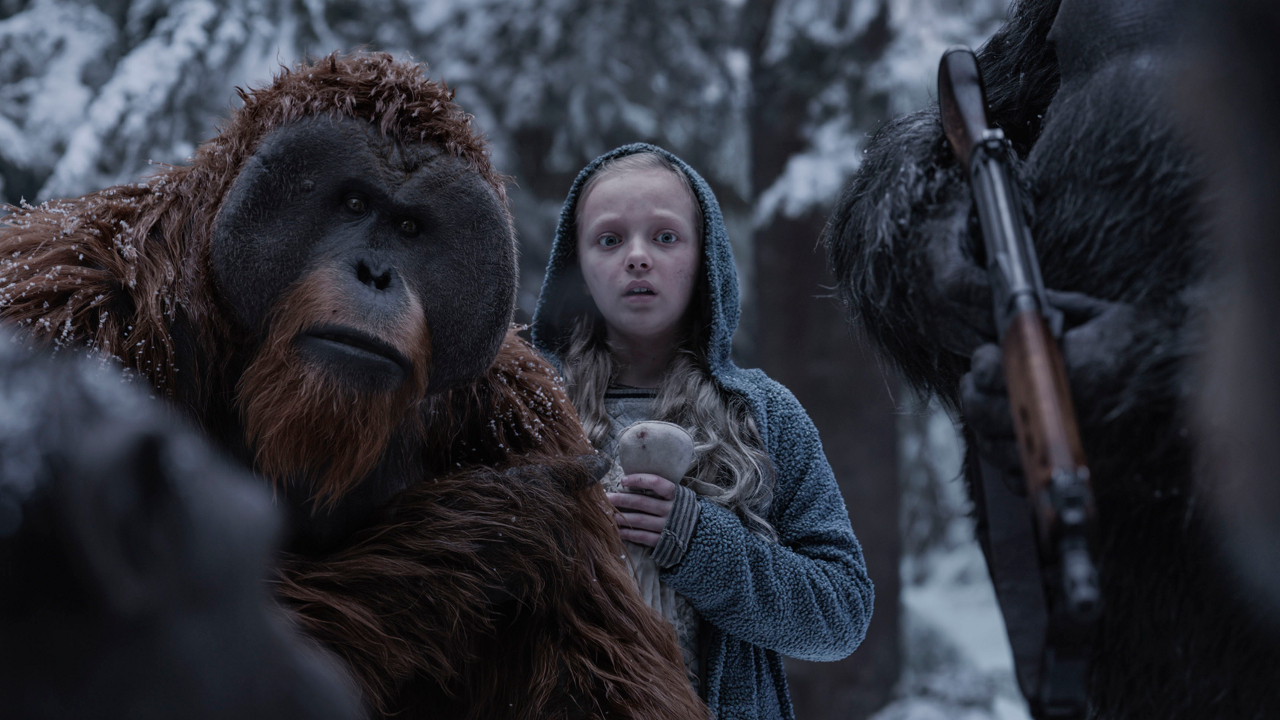 Caesar charged into theaters this weekend in the climactic War for the Planet of the Apes. The 20th Century Fox sequel claimed the top spot with an estimated $56.5 million.

War for the Planet of the Apes managed to top Spider-Man: Homecoming this weekend. Despite overwhelming praise, the third Apes film dropped 22% from the 2014 sequel. Is War for the Planet of the Apes suffering from franchise fatigue? Not exactly. Third chapters do tend to fall from their predecessor. Despicable Me 3 and Cars 3 were perfect examples last month. Star Trek Beyond followed suit a year ago. Fortunately War for the Planet of the Apes is no free-fall like Pirates of the Caribbean: Dead Men Tell No Tales or Transformers: Last Knight. Yes, critics and audiences both like this one. An A- grade on CinemaScore has both parties well on the same page. A finish around $160 million won’t be that disappointing.

Spider-Man returned to the Marvel Cinematic Universe with much praise last weekend. However, much of the excitement burned out as Spider-Man: Homecoming fell 61.4% in its second frame. While a drop higher than 60% is common for the superhero genre, the MCU has nearly avoided it. The Incredible Hulk fell 60.1% in 2008 and Captain America: The First Avenger did drop 60.7% in 2011. That shouldn’t take away that Spider-Man: Homecoming grossed another $45.2 million and has already outperformed the entire run of The Amazing Spider-Man 2. The only real milestone in jeopardy is $300 million domestic, which is the current over/under.

After falling over 53% last weekend, Illumination’s Despicable Me 3 stabilized in its third frame. The animated comedy dropped 43.6%, grossing another $18.9 million. That hold is on-par with 2013’s Despicable Me 2. With $188 million, Despicable Me 3 continues to trail both Despicable Me 2 ($276.0 million) and Minions ($262.5 million). Even if Despicable Me 3 plays like the franchise-high second chapter, its ceiling is under $270 million. Surprisingly enough, that would fall short of last year’s holiday hit, Sing.

Down one spot from last weekend, Sony’s Baby Driver once again proves that Wonder Woman isn’t the only leggy hit of the summer. The stylized Edgar Wright heist film dipped 32.7% from last weekend, pulling in another $8.8 million. With $73.2 million already Baby Driver has already topped the likes of Alien: Covenant, The Mummy and Baywatch. If these holds continue in the coming weeks, Baby Driver could flirt with that century mark. That would obviously be a career-first for Edgar Wright. Though, one has to wonder which is more plausible – Baby Driver passing $100 million or Wonder Woman smashing the $400 million milestone? Who knows? Both could still happen at this rate.

After premiering at the 2017 Sundance Film Festival, Lionsgate’s critically-acclaimed The Big Sick had worked wonders on the limited release circuit the past few weeks. Now in wide release, the Kumail Nanjiani comedy cracked the top charts with $7.6 million. Currently in 2,597 theaters, The Big Sick nearly doubled its entire run past three days. It’s $16 million cume will continue to grow in the coming weeks. Stellar reviews and positive word-of-mouth will keep it around as a favorite for the latter half of summer.

Opening Next Week: Dunkirk, Girls Trip, Valerian and the City of a Thousand Planets

Box Office: ‘War for the Planet of the Apes’ Conquers ‘Spider-Man: Homecoming’