Check out the big brain on Brad (Ben Stiller)! Brad just can’t stop ruminating on all his worries and insecurities. He feels his college friends have been much more successful than him and he’s not sure his nonprofit will afford his family stability. Now Brad is taking his son Troy (Austin Abrams) on a college visiting tour and that aggravates a lot of Brad’s neuroses. Well, let’s be honest. It wouldn’t take anything to fuel Brad’s neuroses but it’s the plot of the movie Brad’s Status. 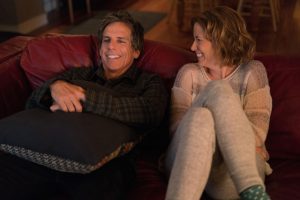 Writer/director Mike White understands insecurity and acting out. The way he and Stiller portray Brad is entirely realistic, if difficult to watch. Brad looks for solutions to mistakes that really don’t need fixing and those “solutions” create more problems than just letting it go. Troy misses his Harvard interview but will get another shot back in Sacramento. Brad not only puts pressure on his wife Melanie (Jenna Fischer) to help find a solution, but the connections Brad pulls only make Troy feel more pressure than if he’d just waited for the Sacramento interview.

What Brad lacks is perspective. Even when a character in Brad’s Status calls out his white male privileged first class problems, he can only see someone not agreeing with his assessment of the magnitude of his dilemma, or even thinking she doesn’t understand him because obviously if she understood him she would have to agree with him. Shortly after, he asks Troy his opinion and then doesn’t like Troy’s assessment. Troy wasn’t complaining but that’s really setting him up for a lecture. 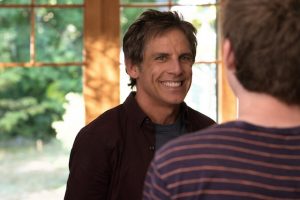 Brad either believes everything people say (not accounting for their bias), or makes up his own stories and he cannot discern the truth between those extremes. That’s most of us to some extent, but hopefully most of us err on the side of forgiveness. Brad leans into resentment. The recurring theme of Brad’s Status is that Brad is keeping score in a way that no one else is.

Brad has fantasies, both worried and celebratory, and often the latter turning back into the former. They never become so surreal they would be full on delusions, but visions of celebrity and prosperity do convey the kind of ungrounded thinking that plagues Brad. It’s self-justification that becomes self-sabotage.

Some of the more material concerns really illuminate Brad’s pettiness. His Silver airline membership doesn’t get him into the special line for Gold and Platinum members. Way to blow the lid off of elitism, Brad.

Brad’s Status comes to a good moral, although I have little faith that he’ll live by it. That’s realistic. Most people like Brad will always find some new injustice over which to obsess. Fortunately, Brad is not a real person and he stops existing as soon as credits roll. Hopefully viewers can identify his destructive habits and avoid repeating them. Don’t be that guy.