Jim Henson’s Labyrinth is my favorite movie of all time, so I have spent 30 years thinking about every detail of it. For the new 30th Anniversary Blu-ray release, Brian Henson attended DragonCon in Atlanta, GA for some panels on puppeteering and Labyrinth specifically. On the last day of DragonCon, I finally got to ask him all my 30 years of Labryinth questions.

I’ve already written about Henson’s comments on the potential Labyrinth sequel and his struggles to get Happyland Murders made. This is all about Labyrinth. The new Blu-ray, taken from a 4K scan, shows colors I’ve never seen in the movie before. A full 4K Ultra HD is also available. Bonus features so Henson and his father working on the set with David Bowie and Jennifer Connelly. The Labyrinth 30th Anniversary Blu-ray, 4K and DVD is available today. 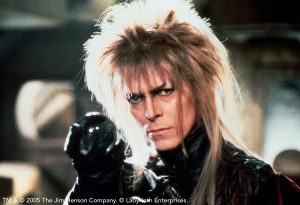 When was the last time you corresponded with David Bowie?

Would he have written more music for Labyrinth on stage?

Well, we were talking about it.

Was he involved with his costume for Labyrinth?

Well, sure. He saw it. He was all for going along with my dad’s vision. He was game for anything so he didn’t like say, “I want it like this. I want it like that.” The costume was designed by Brian Froud. He went with it and that crazy wig and everything. I think he was like, “Yes, I’ll go for anything.” He was very game for doing weird and out there stuff.

There was a Buzzfeed article that said the crotch bulge was Brian Froud’s idea but there was no attribution for it.

I think it was in Brian’s drawings always. The concept of the character, there was meant to be an intimidating male presence about him. It’s a movie about a girl trying to deal with becoming a woman but still a child. Part of the whole idea of Jareth is he’s meant to have an intimidating male presence. In Brian’s drawings, that always meant quite a large codpiece. I guess it did come from Brian. 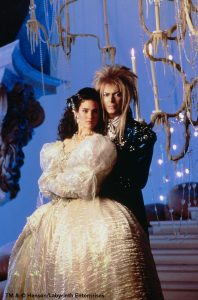 Was that a very fine line to walk since Sarah was a teenage girl and Jareth was an adult male?

I was surprised when I went to discover David Bowie music that his music for Labyrinth was so different than anything else he’d recorded. Was he interested in coming up with a different sound for the film?

I think he was always interested in finding different sounds. Particularly in those days, he wanted everything to be very different from the last thing he did. It was coming off of the huge success of “Modern Love” and I think he was totally experimenting with different songs. That was all him. My father appreciated all the work that David did but David worked so fast and so far ahead musically that all the songs really came out of David’s head. That was David’s thing.

Could Sarah really have gone straight to the castle if she had gone to the left in the beginning?

No. [Laughs] Of course not. Something else would have gone wrong. The lying doors that look like playing cards, she gets that riddle correct. She solves it correctly and she still doesn’t end up in the castle. She still ended up in the oubliette. So I think the whole idea was even when she does everything wrong, he’s got control.

If she had told the Helping Hands to go up, where would she have ended up?

I don’t know, but again he was largely manipulating everybody. She wouldn’t be able to solve the labyrinth until she had enough confidence and maturity to control the situation. Whatever she did, it wouldn’t have gone right until that group had come together and she had the full loyalty of Hoggle and Ludo and Didymus and she had the strength and the conviction and the confidence to confront Jareth. Once she got to that place emotionally, then it wouldn’t have mattered what he did. He couldn’t get in her way.

That’s something that really grew on me as I got older, like “It’s not fair but it’s the way it is.”

Since it was a female hero, did Jim see Labyrinth as feminist? 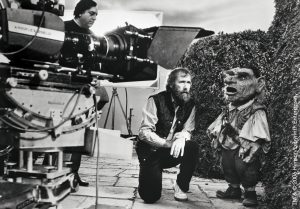 No, not as feminist. It’s sort of a coming of age movie that stars a girl, a girl coming of age rather than a boy. I think Dark Crystal starred the male character, then he had Labyrinth and he wanted it to star a girl.

I read the Jim Henson biography by Brian Jay Jones and I was shocked to learn that Labyrinth was pulled from theaters after three weeks. I must have seen it during those three weeks and that theater is now gone, so Labyrinth has outlived that theater. When did the legacy of Labyrinth become apparent to the Henson Company?

Well, first of all, back then, movies didn’t stay in the theater as long because theaters weren’t these giant multiplexes. Whereas now you’ll have 10 theaters in a multiplex or 12 theaters and they have different sizes: big, big, smaller, smaller, smaller. Now you let movie play longer in the theater than they used to because they move them from the big theater to the medium size theater. Then they move it to the small theater and the movie can keep playing and playing. Back then it wasn’t that way. The multiplex might have three theaters but they’d all be big. So that’s part of it but yeah, it was a disappointment, the theatrical release. As soon as the video business kicked in though, that’s when the word of mouth went out. That’s when enough time had passed where people were really talking about the film. Once you could rend it on video, then it started doing really well and it just continued. It continues today to do really well. It has as big an audience today as it ever has.

After The Dark Crystal, did Jim and the Company find that you actually need some humans interacting with the world to sell the fantasy aspect?

Hmm. I don’t think he felt like you needed it. With Dark Crystal, the idea was to create a world that has nothing to do with human beings and exists entirely separate. So it’s really a pure fantasy world where there aren’t even people. That was the idea with Dark Crystal. The concept of Labyrinth was just very different. It was more in The Wizard of Oz mold of take a story that is maybe growing out of a character’s head or maybe really exists with the characters interacting but take the human perspective. I don’t think it was any feeling of we did that one that way and we should have done it this way. It’s just they’re two different concepts. One has a mixture of humans and one doesn’t.

At 14, was Jennifer Connelly really adept at acting with puppets?

Boy, it’s so long ago I don’t even really remember now. We didn’t have to do so much camera testing. We would rehearse on video so it would’ve looked a lot worse. What my dad was doing with The Muppet Movie was responding to the fact that the studios were resisting the idea of a road movie with The Muppets because the studio was saying, “Wait a second, The Muppet Show works so well but they’re in their world. It’s in their space, it’s their theater and then people walk into it and that works really well but you can’t do a movie with that kind of concept.” My dad was like, “No, I want to do a movie where the Muppets are now on the road in the real world.” They said, “Wouldn’t puppets be unbelievable and not funny in the real world?” So then my dad just went out with Frank [Oz] and they just went out in a car and a 16mm movie camera and just started shooting Kermit and Fozzie out tin the real world. It was stupid and totally unplanned but had to be on film, had to be something the studio [could see]. Also my dad was a little bit irreverent. When people like studios would say, “I don’t believe something.” He would make fun of them when he responded. So he sent them a roll of film and said, “Do you think this is funny?” 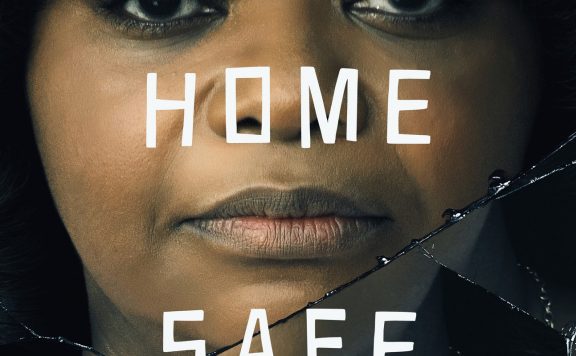 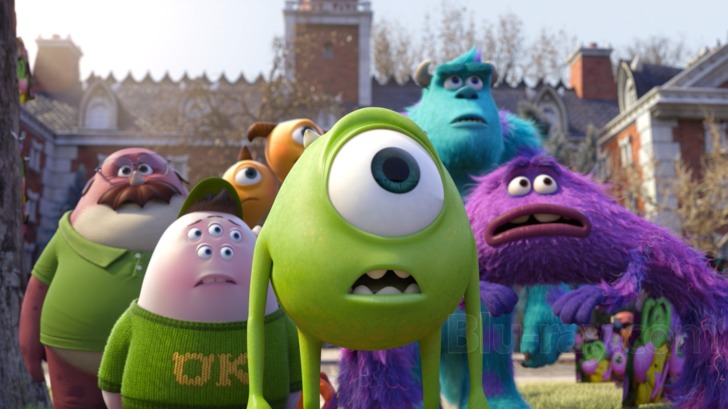 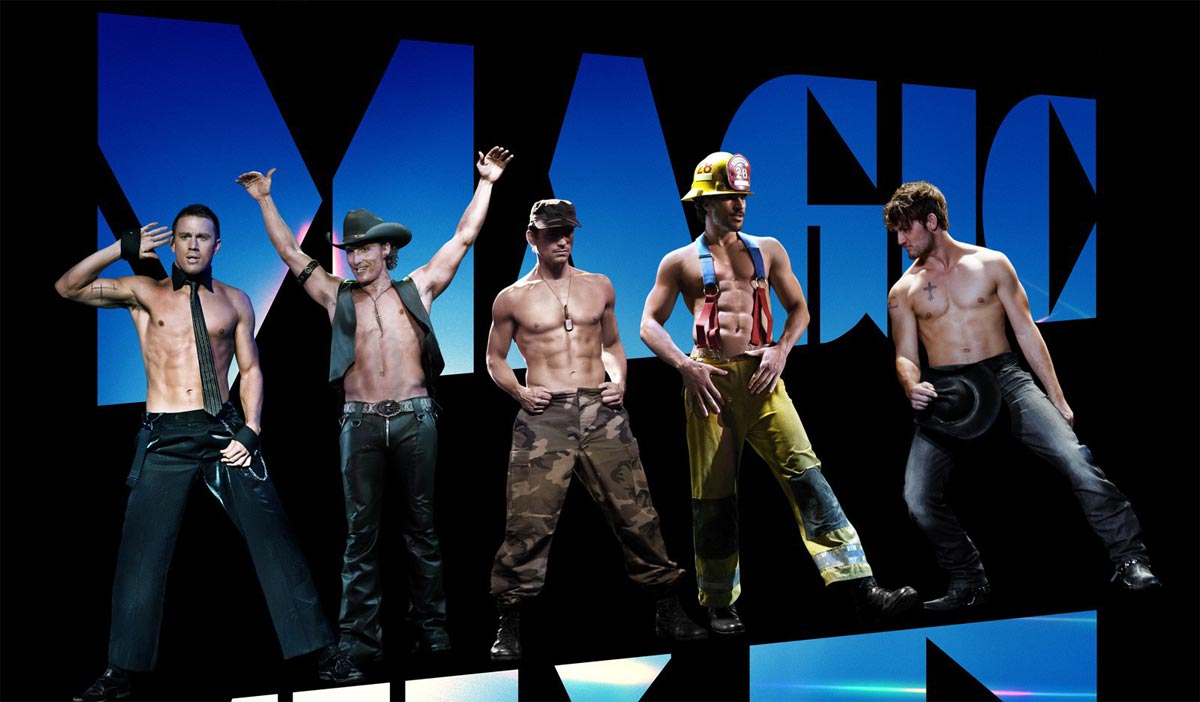 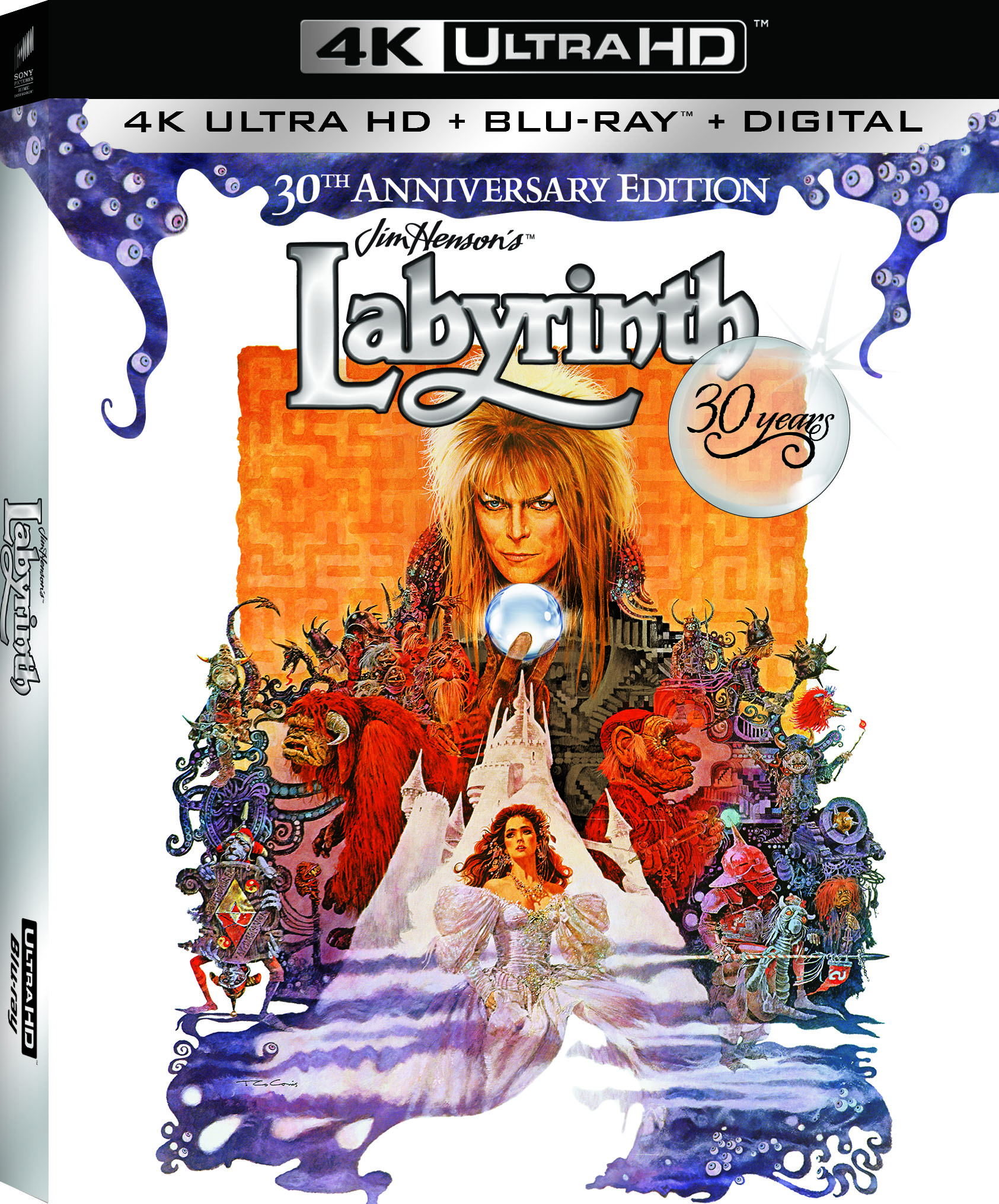 Jim Henson’s Labyrinth is my favorite movie of all time, so I have spent 30 years thinking about every detail of it. For the new 30th Anniversary Blu-ray release, Brian Henson attended DragonCon in Atlanta, GA for some panels on puppeteerin...
0
Average User Rating
0 votes
Please sign in to rate.