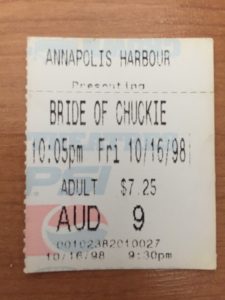 It’s Chucky with a Y, dammit!

Chucky was the first horror franchise I felt ownership of. Freddy and Jason were already underway by the time I was brave enough to l watch them, but I got in on the ground floor when I begged my dad to take me to Child’s Play in 1988 (it turns 30 next month). I guess by that definition Die Hard was the first action franchise that was totally mine. Chucky was always funny because he was a smart-ass, and he’s a frigging killer doll, but Bride of Chucky fully embraced the comedy and Worked on so many levels.

Bride of Chucky probably only exists because of Scream. Scream brought horror back in the ‘90s and the effect was twofold. Most important to Chucky, it made horror comedy viable. For other franchises it made teen horror viable. So horror was big again and Universal had this franchise and Don Mancini wrote the ultimate self-referential ‘90s postmodern horror. 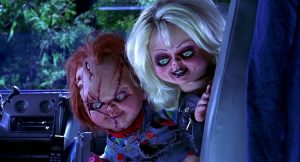 The Scream kids were influenced by horror movies and knew the rules, but they still lived in the real world. Bride of Chucky was set in Chuckyland where reality need not apply. There was already voodoo and killer dolls in this world so it made references that deconstructed everything. 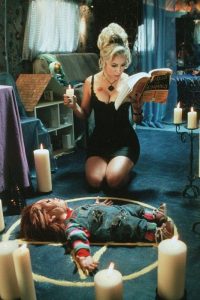 Voodoo for Dummies killed me because the Dummies series was so prolific in book stores. Chucky refers to movie sequels, and he’s kept in the same evidence locker as Freddy, Jason and Leatherface’s famous props. There’s a Pinhead reference later.

My favorite joke in the movie is Howard Fitzwater, which could arguably be the most ‘90s joke in the film (even in a film that name drops Martha Stewart). Goth was huge in the ‘90s, but there was always suspicion that goths were posers. Damien (Alexis Arquette) is trying to be all macabre and murderous for Tiffany, but he’s really just good old Howard Fitzwater. 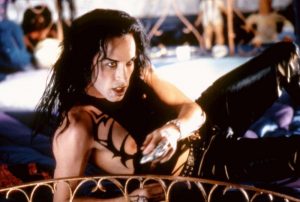 With the opportunity to bring Chucky back post-Scream, screenwriter Don Mancini expands the mythology of the franchise. Just introducing Tiffany (Jennifer Tilly) expands the Charles Lee Ray (Brad Dourif) mythology. He had a girlfriend and a whole relationship before the incident at the toy store in 1988. 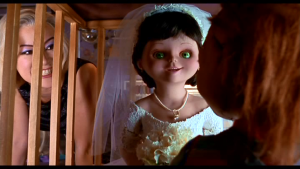 Introducing Tiffany gives Chucky another level of twisted psychosis. As a human, he was clearly an abusive boyfriend and Tiffany was the type who always fell in with the bad boy. Even when she brings him back, he’s verbally abusive and mocks her hopes for marriage and a family. As dolls, they continue to explore the twisted domestic squabbles of ridiculous killer dolls. It’s like Mickey and Mallory but two feet tall.

It’s also the whole Bride of Frankenstein analogy. The James Whale film appears in Bride of Chucky, and the creature’s “We belong dead” sentiment rings true. These creatures are kind of abominations, and they either deserve each other or deserve to be destroyed. https://australiacasinoonline.com/5-dollars-minimum-deposit-casinos-australia/. That comes through even amid the insanity of the plot. 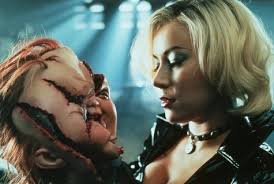 The “FrankenChucky” look became Chucky’s iconic look for the future sequels. He’d been bashed up by the end of the last movie and Tiffany could only stitch his face together, but that looked cooler than the clean, slick Good Guy face.

The doll sex scene is just amazing. You’ve got to remember, all three previous films had Chucky gradually becoming human, evidenced by bleeding. Well, what else do humans do? Mancini went there, and went even further in the film’s coda. 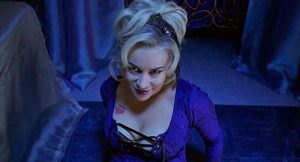 Tilly brought the same sensuality to a Chucky movie that she brought to Bound and her other femme fatale roles. She’s dancing erotically, and making lip quivering faces, but it’s at a doll. Tiffany is utterly aroused by having her man back, even if he is in the body of a doll. 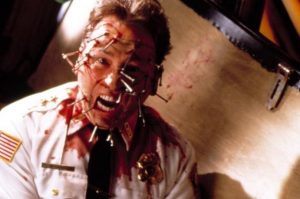 John Ritter plays a magnificent A-hole. He references Christian Slater on New Year’s Ever, which I’d forgotten was Slater’s rep in the late ‘90s. He’s Mr. Robot now. Good for him. 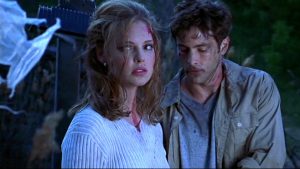 They did fit a little bit of teen horror into Bride of Chucky. Jesse (Nick Stabile) and Jade (pre-Grey’s Anatomy Katherine Heigl) have to run away together, and Jesse gets roped into transporting Chucky and Tiffany to New Jersey. There are even a few moments of stoner comedy. 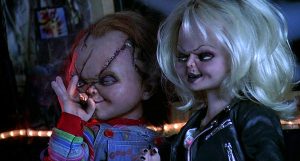 So there is a hook for the I Know What You Did Last Summer crowd, but what’s really clever about Jesse and Jade is the film makes them suspect each other. All these people connected to them and their travels are dying gruesomely, so what are two young lovers supposed to think? Killer dolls certainly won’t be the first thought they entertain. 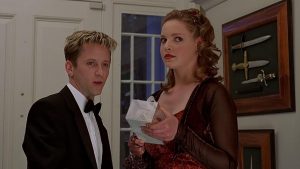 Their friend David (Gordon Michael Woolvett) is also a sympathetic character. It’s also worth noting that at the time, gay characters in mainstream movies weren’t that common. There was Rupert Everett in My Best Friend’s Wedding, but Mancini was sly make some headway in representation in the ‘90s. 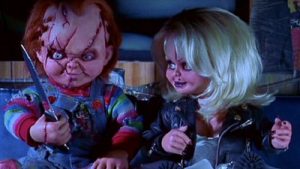 Bride of Chucky has been my favorite movie in the franchise, although now I would say Cult of Chucky is neck and neck with it. Each sequel has done clever things, whether it’s Seed of Chucky taking meta self-reflection even further, Curse of Chucky creating new Charles Lee Ray mythology or Cult twisting the mysticism and consequences to new creative degrees.

The Child’s Play trilogy certainly found fun new ways for Chucky to come back and keep killing people, but Bride of Chucky was that one that took the franchise to the next level. Franchise Fred will always approve Blank of Chucky.