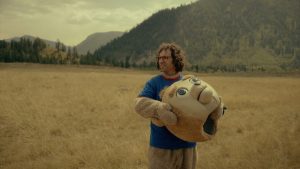 Brigsby Bear may be one of the top five movies where a guy puts on a bear suit. It’s not as good as the one where Nicolas Cage wears a bear suit and punches women in the face, but I’m sure there are a lot of bear suit movies that are a lot worse.

James (Kyle Mooney) was raised in an isolated compound by Ted (Mark Hammill) and April (Jane Adams). The only show he was allowed to watch was “Brigsby Bear,” a children’s show which taught him life lessons and also discouraged curiosity. Also he never put it together that Ted was clearly the Sun Scorcher. It turns out Ted and April had kidnapped James and created the show just for him. When he’s rescued at age 25, the adjustment is rough.

The tone of Brigsby Bear is uncomfortable, and intentionally so. Before I get into the film’s problems, I will give it credit for the tonal consistency. There is mild humor, though not ha ha humor, at James’ unfamiliarity with the real world. Writers Mooney and Kevin Costello and director Dave McCary are determined never to let a joke go by without undercutting it with the stark tragedy of the situation. 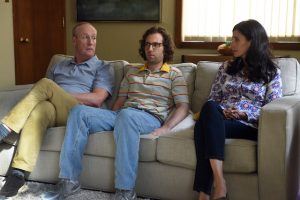 In a way, the film puts us in the position of James’ family. We’re onto this plot long before it’s completely revealed to James, but imagine having to explain it to a 25-year-old who’s only grown up with kidnappers and a fake TV show. We have to be patient just like James’ parents (Michaela Watkins and Matt Walsh) do because they can’t just scream, “IT’S NOT REAL. WELCOME TO REAL LIFE” either.

James’ crash course in 20th/21st century pop culture is iffy. Star Trek is real, but there are fake movies too. The hockey movie he watches is clearly The Mighty Ducks, but it’s not necessarily a spoof of The Mighty Ducks whereas Detective Fur Hire seems like it could be a Turner & Hooch spoof. Also, it’s 2017 because of the internet and cell phones but the movies are from the ‘80s and early ‘90s? 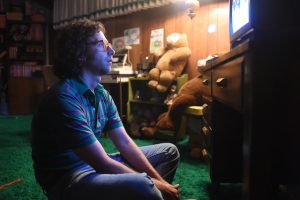 Once James accepts that there are no new “Brigsby Bear” episodes, he decides to make a movie to give the show resolution. It seems like he knew all along it wasn’t a real bear, so he had he concept of A show, just not the awareness that there were any other different shows in existence. Yet at one point he comments that practical effects dying. That’s something that only someone reared on real movies of the ‘80s and ‘90s would even know to feel. 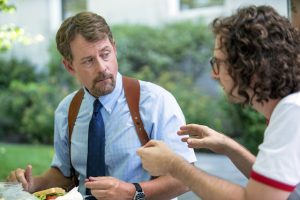 If we are invested in James gaining control over his life, aren’t his parents and new friends enabling him? His sister (Ryan Simpkins) introduces James to friends who help him make the film and the detective (Greg Kinnear) on his case even lets him have evidence! I get that the parents are so happy to have their son home that they don’t want to risk losing him with strict rules, and maybe it gives him something to focus on while making real world friends. I’m skeptical of the endeavor.

Brigsby Bear is an ambitious experiment in tone, but it seems to have bitten off more than it could chew. There’s more to social commentary than tone, and Brigsby Bear lacks the maturity to portray its subject matter with the depth it requires.