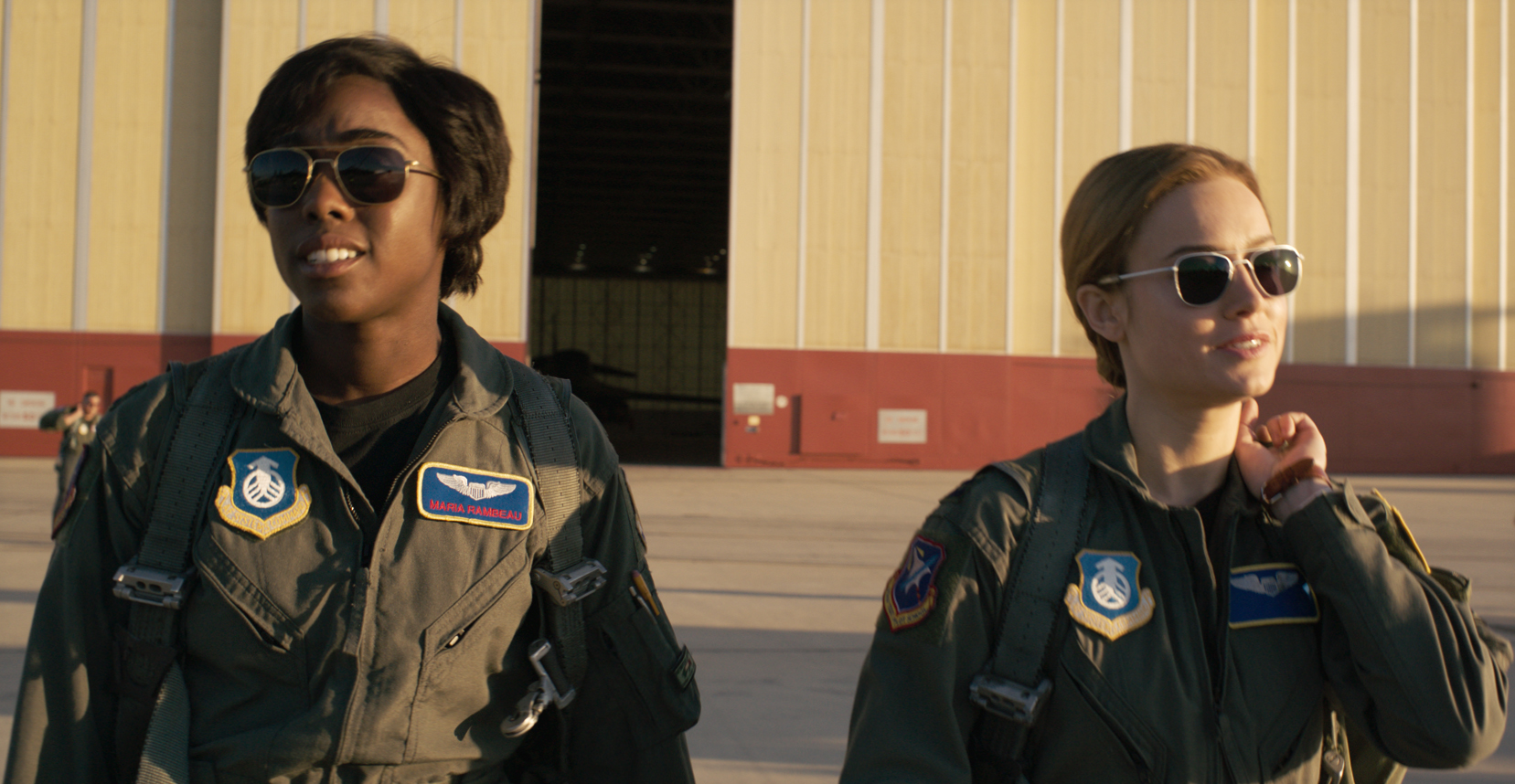 Captain Marvel gives us the back story of Vers/Carol Danvers/Captain Marvel (Brie Larson) as she learns who she is and discovers her power. Following a battle with the Skrulls, Vers finds herself on Earth, or C-53 as the Kree refer to it. As Vers has to navigate this new planet, she discovers that what she has come to know as the truth, may not be. Through discovering herself and a long lost friend, Maria (Lashana Lynch), she works with Nick Fury (Samuel L. Jackson) to uncover the truth about herself, her past, and the world in which she lives. Set in the 1990s, Captain Marvel is ripe with plenty of easter eggs and nods to artifacts of the time that fills the audience with a slight nostalgia for the good old days.

Marvel, well into its stride, knows how to do special effects and they are on full display in Captain Marvel. Knowing that we have seen Fury as an older character in films like The Avengers,  we suspected that they had to do something to make him look younger. The use of technology to create a younger Samuel L. Jackson and a younger Coulson (Clark Gregg) is mind-boggling. Every scene is perfect and looks so natural that it’s a bit freaky to watch. The work on the Starforce characters and their costumes was spectacular to see. The scene where they switch from water masks to the masks for air is so seamlessly done. This might seem like something so simple but yet it is so effective. The Skrull characters are on another level. The scenes showing the Skrull transitioning and their faces morph is fascinating to watch. The special effects team was at the top of their game, from the simple facial changes to the explosions, they’ve created a visually striking film. 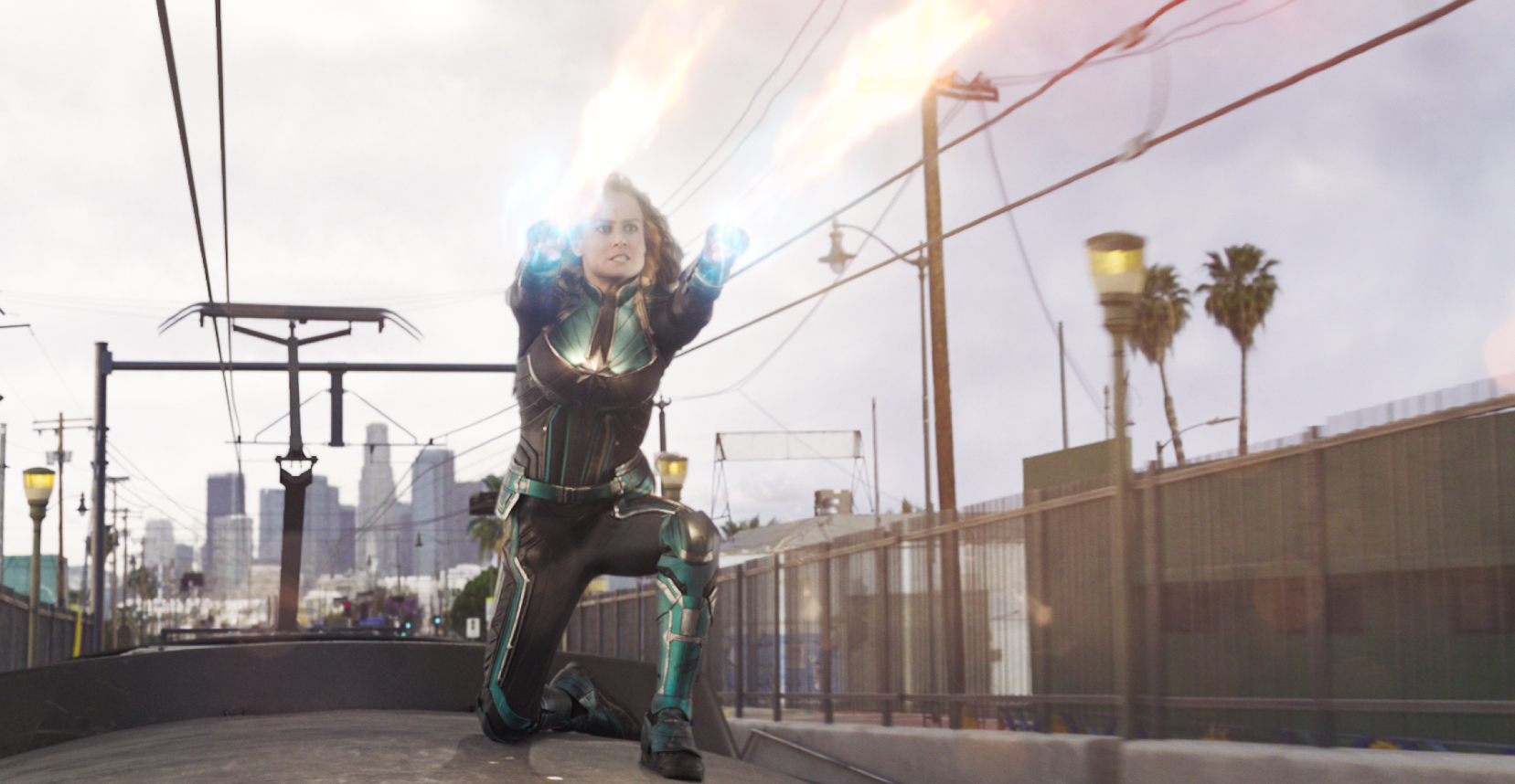 In addition to creating a visually superb film, the choreographed fight scenes were so exciting and engaging to watch. At the beginning of the film, we get to see Vers and Yon-Rogg (Jude Law) do some Starforce training and engage in some pretty intense hand to hand combat. The choreographing of this scene was the first step in building a level of anticipation for the rest of the story. In a way, it establishes Vers as a character, giving us such insight to who she is. Another standout moment is once on Earth; Vers engages in a fight with a Skrull while on a train. The way this scene is filmed and laid out ups the ante and calls attention to the strength and resilience of Vers as a character.

What I feel the writers did so well is that they injected just the right amount of humor into Captain Marvel. The nods of nostalgia for 90s pop culture provides a great deal of humor, but also the small little comments that might also be missed elevate the humor in the film. As Vers makes her way to Earth, there is a comment that “C-53 is a real shithole,” of course referring to Earth. As Fury is called to investigate her less than subtle arrival on Earth, he mentions that the report says he’s looking for someone “dressed for laser tag.” These small moments work to enhance the story, but easily my favorite comment involves Vers and a man telling her to smile. It is such an “in your face” moment and I appreciate the commentary it makes.

While Vers spends her time on Earth trying to discover what the Skrulls could be looking for, she finally meets Maria, a person from her muddled past who she can’t seem to place. What I truly love about Captain Marvel is that it takes a big stand against the typical male-female love story dynamic that seems to pervade many female-led films. The focus and the crux of the film is not a romantic love story, but rather the friendship and love between two women. The power, strength, and drive they bring out from each other and Maria’s daughter, Monica (Akira Akbar) is what propels them forward and drives their passion. 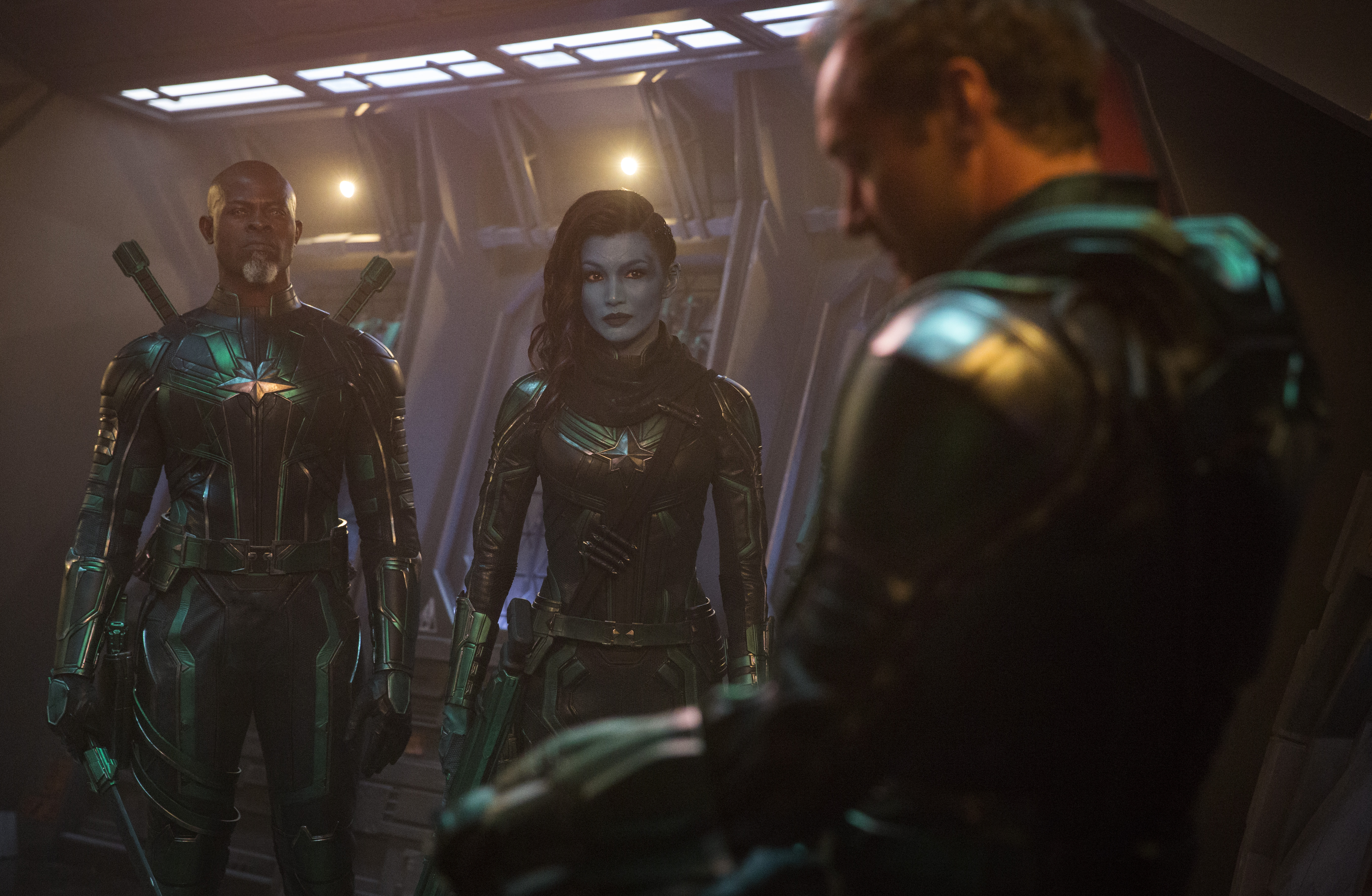 Captain Marvel is the first feature film for a female superhero from Marvel, and the expectations are high. Where Captain Marvel truly shines is in the message that it sends to women of all ages. While Vers is told to fight her emotions and control her impulses, she proves to herself and the audience that she doesn’t have to be vulnerable to show love and doesn’t have to compromise herself and her emotions to be a hero. She can thrive off of her emotions and let them guide her judgment, and this is what makes her spectacular. What I love about the approach the directors took with the film is that they didn’t compromise or dilute her character or strength as a superhero just because she is a woman. They embraced her strengths and emotions and made them an integral part of who she is.

The way that women are portrayed in the film further accentuates their strength. Not only is Vers/ Carol a hero, but so are Maria and Dr. Wendy Lawson (Annette Bening). They are heroes in their crusades; Maria as a single mother and a pilot, and Dr. Wendy Lawson as a scientist, protector, and more. The film sends the perfect message that all women can be heroes in the battles they choose to fight. Even the choice of music during crucial scenes in the film continues to bring home the message that empowers the audience. We get some great scenes with songs such as “I’m Just a Girl” by No Doubt, “Come As You Are,” by Nirvana, and “Only Happy When It Rains,” by Garbage. These choices of music further exhilarate the audience during key scenes in the film.

Vers/ Carol as the main focus of the film is a powerhouse character, and Brie Larson embodies every aspect of her. Her performance is nothing short of extraordinary. You can tell she embraces every aspect of this character and brings her to life in a way that is both authentic and meaningful for the audience. In the film, we see Carol/ Vers to get knocked down over and over again but also manages to get back up, and this is the epitome of her strength as both a character and a superhero. Through her journey, she learns that her ability to believe in herself and trust her emotions is one of her most significant assets. This message is incredibly relevant today, in a world where women are continually being accused of being too emotional or too vulnerable to do certain things.

In addition to Brie’s performance, the supporting cast of the film rounds out the film perfectly. Lashana Lynch is the perfect match to Brie’s Carol. She is fierce, powerful, and makes sure you take notice. Samuel L. Jackson and Brie have great chemistry together on and off screen, so the times they appear on screen together are some of the funniest and most entertaining of the film. Gemma Chan, Jude Law, and Djimon Hounsou as the Kree are all great in their roles. Ben Mendelsohn as Talos plays the character perfectly with enough nuance to show the complex nature of the character. I would be remiss if I didn’t mention the best four-legged addition the film, the cat, Goose, who, as most cats do,  holds the key to some secrets as well.

Captain Marvel is an unabashed message to the world that the strength of a woman is a force to be reckoned with and recognized. Each element of the film, the comedy, action, direction, and performances hit perfectly. The film strikes a balance between showcasing a superhero and showcasing a human being. It seeks to remind us that heroes are everywhere and that within your weaknesses may lie your greatest strength. Captain Marvel is a must-see superhero film. It pushes all the right buttons in bringing the audience to the edge of their seat and rooting for the newest and first standalone female superhero film in the MCU.