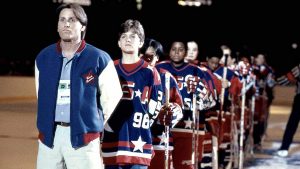 When D2: The Mighty Ducks opened 25 years ago, I didn’t see it because I was any big fan of The Mighty Ducks. I thought it had been an average underdog sports movie where Gordon Bombay (Emilio Estevez) learned to love those kids. I just saw the sequel because it was there, and it was one of those movies I drove myself to the early show on Saturday with my newfound 16-year-old freedom. Oh, how I wish I still had my ticket stub. I can only guess it died a noble death in the pocket of my jeans going through the wash. I salute you D2 ticket stub. But D2 was such a vast improvement, it had themes that really impacted me, and laid some foundation for my belief in continuing stories. 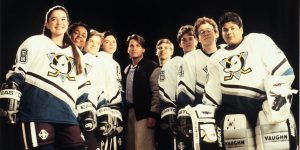 The Mighty Ducks were a lousy hockey team that learned to become champions at the end of the film. We’ve seen that before in better and worse versions. They can’t get good again so D2 has to be about something more. Other sports sequels couldn’t figure this out. Major League II, out a week later, bent over backwards to make the Indians suck again so they could just repeat the same movie. D2 didn’t repeat itself.

The Ducks are still awesome, so awesome that they get new opportunities. They get to play for Team USA in the Junior Goodwill Games. This is the next level from Pee Wee hockey, with more pressure. You’re not done when you win the championship. 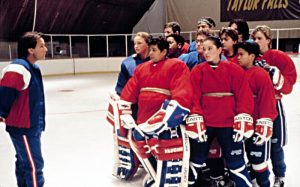 You think you’ve learned how to win championships? Now add some new teammates and try to work with them. You don’t get to keep the same roster every season. New teammates challenge the routine, but now the training montages are team building exercises, learning to work together. 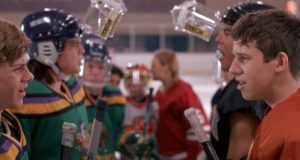 Learning street hockey helps the Ducks gain the skills to win. The LA kids teach them so the newly mixed team learns even more by including even more kids. When the Ducks execute those formations on the ice you can tell they’re working together as a team. There’s an injury magically healed before the big game but it provokes even greater teamwork as one player gives up his position for his fellow duck. 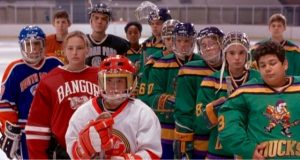 This time when they win it’s not just glory and a trophy. They’ve won friendship and skills that will help them adapt to anything life throws at them. When they sing “We Are the Champions” over the campfire, they really are the champions. Not because they won another contest. They’re the champions of teamwork and inclusivity. New friends and athletes are welcome and the existing ones can always grow. 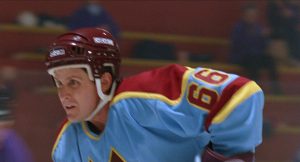 I guess they do reset Gordon a little. He gets a chance to play minor league hockey and gets injured before he can go pro. So he has to go back to coaching but that’s something that can happen to athletes too. You don’t automatically get a career once you start playing pro. Going corporate makes the Ducks think he’s sold out. I suppose as a kid I thought it was cool when Gordon took off his suit and burned his merchandising. That part may have been oversimplified. The athletic gear company hired him to both coach and represent the company so he’s probably in breach of contract. Everyone seems happy though. 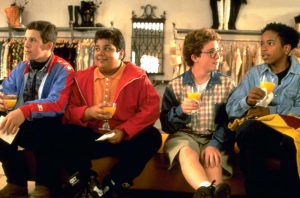 D2 is still a kids movies so they still have kids shenanigans on the ice, in their dorm, and in Beverly Hills. That’s young Kenan Thompson as the heckler at Ducks games.

Hockey is a violent sport but Gordon teaches them revenge is a bad cycle. It’s simplified for kids but it’s there. Being a team is more powerful than getting back at individual goons. Ducks fly together. There are always new opponents and the world stage brings tougher opposition. 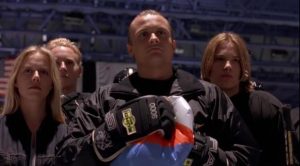 Who knew Iceland was so cutthroat? But that’s something that may get lost in happy endings. You’re never done just because you beat one bully or won one championship. 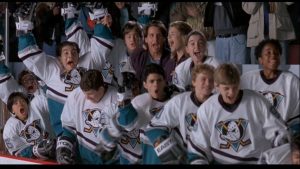 In real life, The Mighty Ducks had become a real Annaheim hockey team between the first and second film. They wear the official uniform in the third period. I’m not exactly sure what it’s saying with that meta narrative. This all happened within the span of a year and a half so it’s probably too quick to mean anything deeper than corporate synergy.

Had they already rebranded we will rock you as we will quack you? When they sing we are the champions around the campfire, they really are. I think it’s an evolution of the quack chant form the Pee Wee leagues. 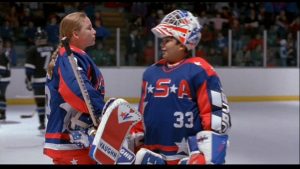 Naming it D2 was also the first time another franchise picked up the T2 transition. Only they never even called it Mighty Ducks 2. It’s just D2: The Mighty Ducks. The third one was D3 too. Decades later we came full circle to have another T2 with Trainspotting. 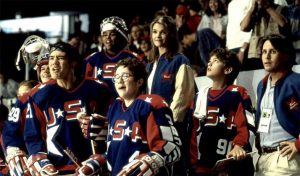 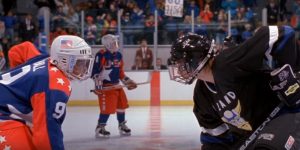 Narratively I thought it was reasonable that the Ducks had to adjust to life without their coach and they had to crank these out before the kids grew up. I think they should definitely do a D4 where the adult Ducks now have kids who have to live in their parents’ shadow and carve their own paths on the ice. D4: The Ducks Awaken!