10 years ago, The Dark Knight was poised to be a phenomenon. Batman Begins had been so good, a take on Bruce Wayne so compelling it would have been good even if he never became Batman. The reboot also instilled confidence that Christopher Nolan had steered the Batman franchise back on track. So The Dark Knight had to be both a real Batman movie and a sequel to Batman Begins, and boy did it succeed.

The Dark Knight had everything you’d want in a Batman movie. There were copycat Batmans Bruce Wayne (Christian Bale) had to deal with. He still had to catch The Scarecrow (Cillian Murphy) from the last movie. He’s got new wonderful toys. Two famous Batvillains show up and don’t clog up the script or steal the spotlight from each other. All that plus all the political and philosophical topics the film explores through Bataction. 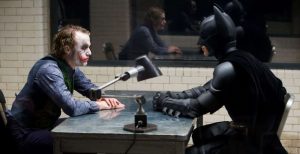 I may have been worried that people would inflate Heath Ledger’s performance because he died, but that worry was unfounded. Ledger was so good I literally wanted to applaud every scene he did. I didn’t because I also wanted to keep watching the movie. This was a Joker truly so unpredictable he was more dangerous than the average evil prankster.

Aaron Eckhart’s Two-Face remains the most horrifying image I’ve ever seen. I was tense the whole movie waiting for something bad to happen to poor Harvey because we know from the comics that’s who he becomes. To actually CGI a realistic burn on half his face, with exposed jaw bone, I don’t know how they got a PG-13. That’s more gruesome than any of the Saw movies. But they kept it poignant. You either die a hero or live long enough to become a villain, literally. And you don’t get the hero you want. You get the hero you deserve.

Nolan maintained a visceral drive (with a vital assist from Hans Zimmer’s score) that simulates what it must feel like to be Batman. If there are any nitpicks about the plot I would say it’s more important that the film maintains the visceral momentum than stand up to logical scrutiny. The only one that bothers me is when Harvey shoots Batman. Did he not think the batsuit was bulletproof? But I guess he was high on painkillers with half his face burned off, maybe he was thinking more emotionally.

Expanding the screen to IMAX was a revelation. Studios had been trying to sell us on 3D and many viewers were like, “But 2D movies already have depth, this is redundant and we don’t want to wear glasses.” Nolan showed us truly immersive scenes and we were like, “Oh, that’s what it feels like to look down on Gotham City or up from street level.” Nolan would use it again for The Dark Knight Rises, Interstellar and Dunkirk while films like Mission: Impossible – Ghost Protocol and Fallout, Skyfall and Transformers would do their version of IMAX. Transformers would cut wildly between open frame and different aspect ratios so that didn’t create much scope, and Skyfall was digital but Nolan and Mission use it strategically and aesthetically. The IMAX sequences even hold up on Blu-ray. Even if the screen doesn’t tower over you, the quality of the camera makes the images stand out above the rest of the film.

The Dark Knight Rises was less acclaimed. I still like it. If it had been the first new Batman movie it would have been great. I only love it a little less than Begins and Dark Knight. I’m sure it could have been different had Ledger liver to reprise his role but for adapting to real life tragedy, Bane was a solid antagonist. I appreciated the way they did the broken back storyline. The additional real life tragedy of the Aurora shooting probably turned some away from theaters making it hard to celebrate Batman.

Nolan’s trilogy inspired the studio to try to make their other superheroes in the same style. The James Bond series was doing the same thing simultaneously, but the Dark Knight tone wasn’t quite right for Superman. Man of Steel is good and I like parts of Batman v. Superman but once you’re dealing with super powers, taking it utterly seriously seems to be missing the point. Fortunately, Wonder Woman broke free of the grimdark aesthetic as much as it could within the franchise. 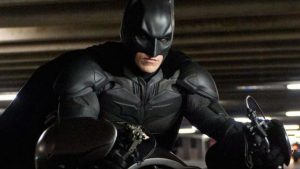 I was one of the first to see The Dark Knight for the press junket, so we had no indication just how intense and phenomenal it was going to be. We had the expectations of Batman Begins but this was on another level. I wonder what it was like for people experiencing The Dark Knight this weekend a decade ago after reviews had already started the hype. The Dark Knight proved to be one of the movies that could live up to its own hype and stand the test of time, but I hope many audiences got to experience the surprise I did.