Like with any film, it’s no secret that there are various ways to address a theater adaptation. Dear Evan Hansen is based on a Tony Award-winning stage musical that I have no familiarity with. It features a variety of hummable songs, though analyzing lyrics has never been a strength of mine. And, of course, at the center is star Ben Platt, who has been singled out for his age, as he is reprising his role as a high school student. So, what is the best approach here? Well, based on what I’ve seen, it’s clear to understand both the intention of this story and the limits that come from removing the stage element. That ultimately leaves a film featuring distracting aspects and too much emotional manipulation to make up for its earnestness.

Platt stars as Evan Hansen, a high school senior with near-crippling social anxiety. Based on an assignment tasked to him by his therapist, Evan writes letters to himself to ideally champion a positive day. One of these letters falls into the hands of another classmate, Connor (Colton Ryan), who ends up committing suicide.

Found with Evan’s letter on him, Connor’s family believes Evan to have been his best and only friend, prompting them to look to him for comfort. Soon enough, this unfortunate misunderstanding turns into a lie that spirals into a phenomenon driving other kids in crisis to be more open. But what will Evan do as the weight of his deception comes closer to catching up with him? 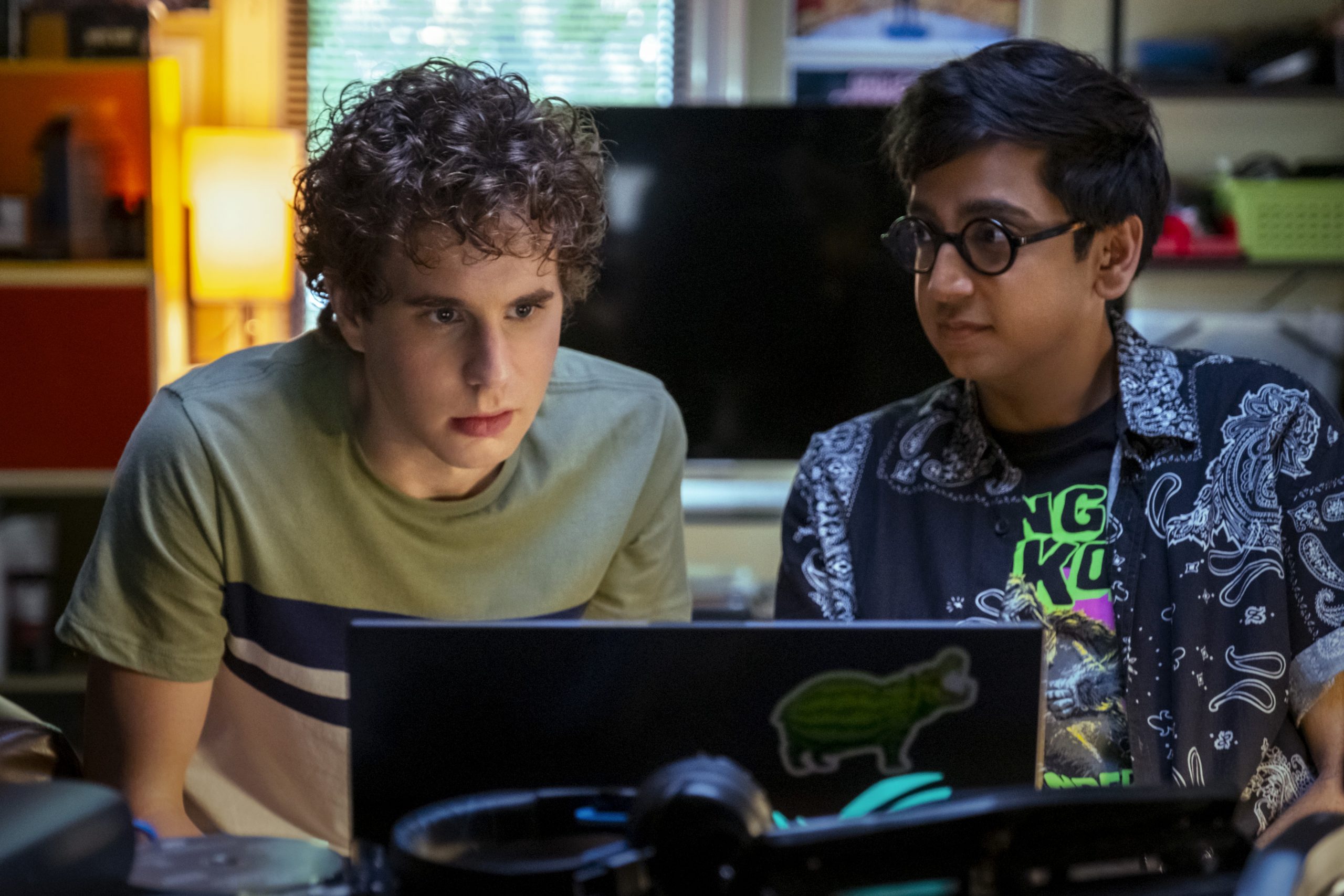 Dear Evan Hansen is directed by Stephen Chbosky, who has mined similar territory before with The Perks of Being a Wallflower (adapted from his own novel) and Wonder. Purely from a filmmaking standpoint, it seems as though his ability to do interesting things with coming-of-age stories is best suited for reality-based dramas. In crafting a musical, part of the issues stem from this film lacking much of an identity that felt anything more than bland.

The story’s presentation is not aiming for much glitz and glamor during its musical numbers. Still, the non-showy approach leaves so much to be desired in shaping these characters beyond the obvious messages found in some of the more notable songs. Even when considering the film’s most lighthearted number, “Sincerely, Me,” attempting to mine some comedic beats within a framework surrounding a recent suicide feels disingenuous.

Similarly, while Platt is clearly a strong vocalist, the malleability of his voice is not something that should be transferred to his body language. While his age is notable (not just because of how he looks, but how he looks compared to everyone around him), it’s not necessarily a deal-breaker. However, the character Platt is portraying has many issues that feel as though a stage setting could get past in the way a cinematic take does not allow for. 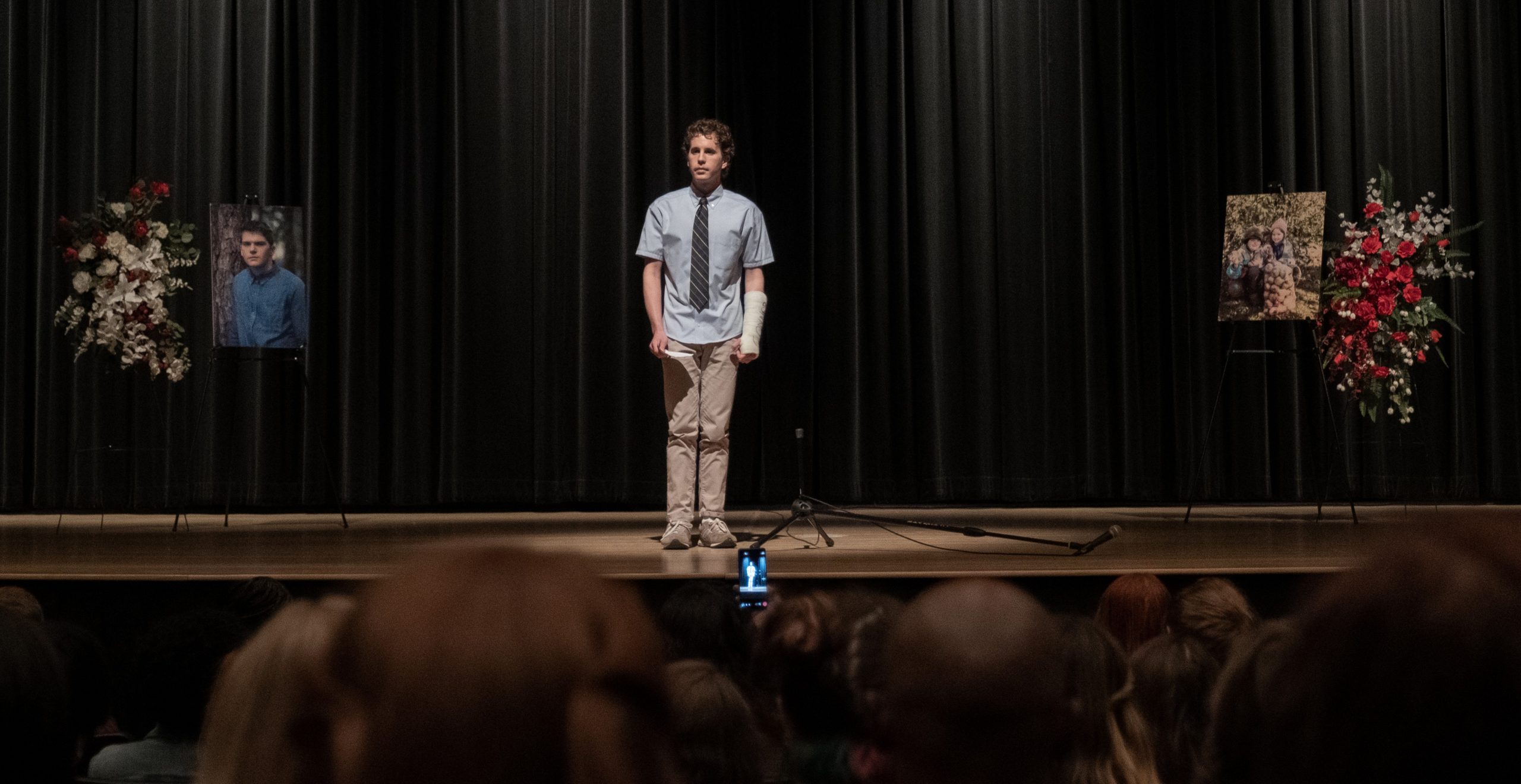 The ability to project emotion to a crowd means going big when necessary and creating empathy based on deliberate staging. This film merely leaves a character built up through ticks, clothing, and slouches to help him pass as a high schooler, which ends up making things more distracting, let alone emphasizing the shallow characterization. It’s not enough to break through the unlikable barriers set up by his actions. Again, were I to have found myself connecting on an emotional level thanks to a stronger hand in the direction, perhaps I could better go along with Evan’s journey. As it stands, I essentially had to tolerate him.

Elsewhere, the film finds more substantial elements. The supporting cast features Amy Adams and Danny Pino as Connor’s mother and father, with Kaitlyn Dever as Connor’s sister and Evan’s longtime crush. Amandla Stenberg co-stars as another classmate who is the student body president and also suffers from anxiety. Finally, Julianne Moore is featured as Evan’s mother, who also delivers the film’s best performance.

Moore and Dever both stand out thanks to the script’s construction of these characters as purely sympathetic, with the additional fact that both performers are excellent. Compared to what we see of Plat, Adams, or Stenberg, who are pushed into moments designed to manipulate the audience’s emotions, having someone as good as Moore means seeing a character truly come to life. Their ability to have us perceive the gears turning in their head as their character in making certain choices goes further than clunky writing. 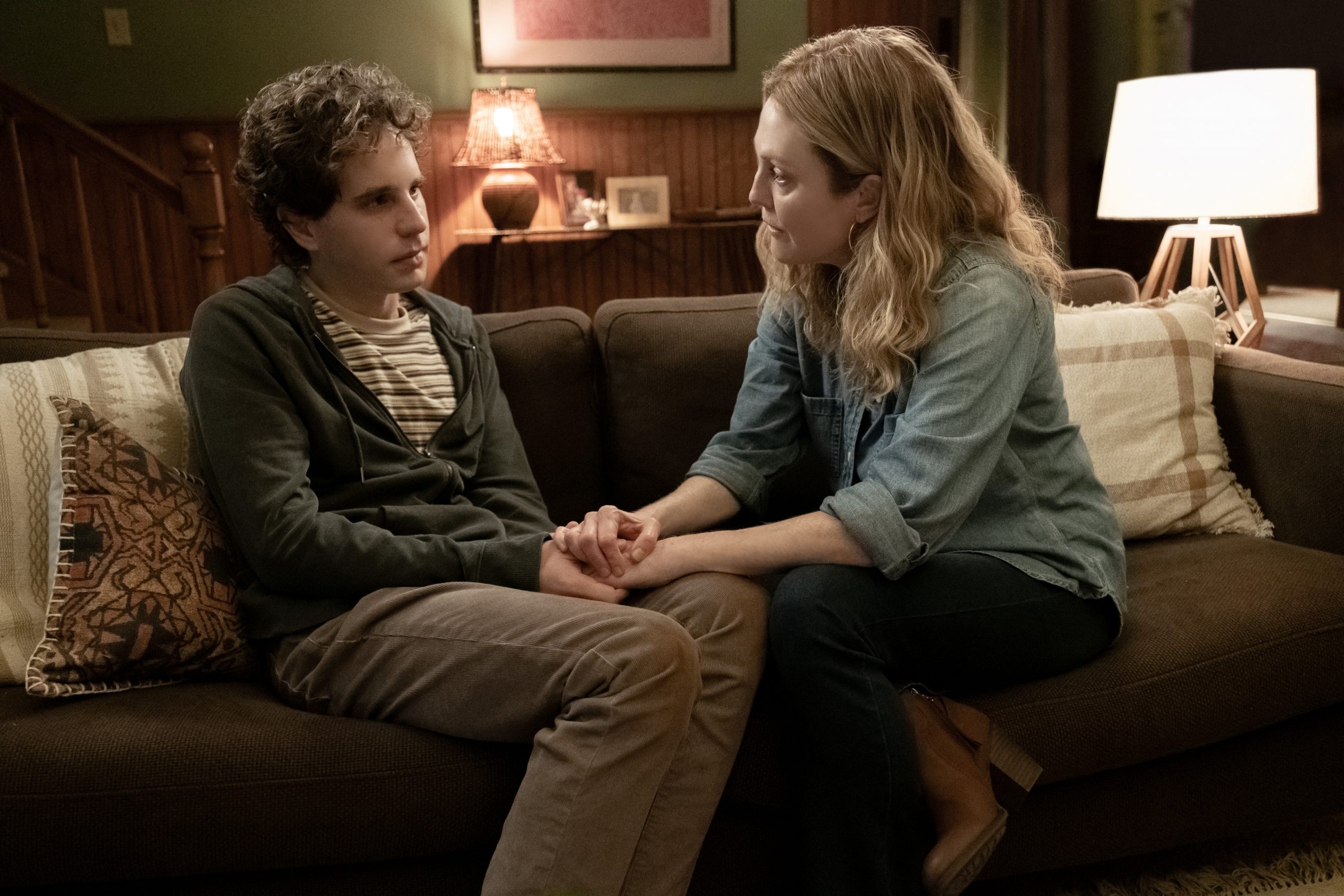 Outside of the strength of some of these performances and the quality of the music from the talented songwriting duo behind La La Land, Benj Pasek and Justin Paul, I do wonder if the film packages up some of its core ideas too neatly. Relying on the modern era to help tell the story, the notion that a viral video can make life’s problems better by simply opening up feels like too much of a tidy cure-all. That’s especially the case, given how suicide factors into this story. At the same time, Evan’s actions are continually baffling in a way that blaming his anxiety for also borders on being dangerous.

Of course, for a film presented as being one ultimately filled with hope, I have little doubt it can play well for a general audience. That doesn’t make anyone wrong for enjoying what they found to be a combination of emotionally engaging and entertaining. Still, I do wonder if the lack of a greater challenge can have a longer-lasting effect. If we’re hoping to get more out of films willing to engage with today’s society, they should do more than scratch the surface.

As a big-screen musical attempting to tap into mental illness while also serving as a moving series of melodies, I found Dear Evan Hanson to be messy in its writing and lackluster in its presentation. The actors do what they can, delivering well enough in their vocal performances but straining to register as fully fleshed-out characters, save for a couple. I take no pride in forsaking the efforts of many, but for a film that does produce the occasional powerful moment, I wish the rest of it didn’t come off as inauthentic. 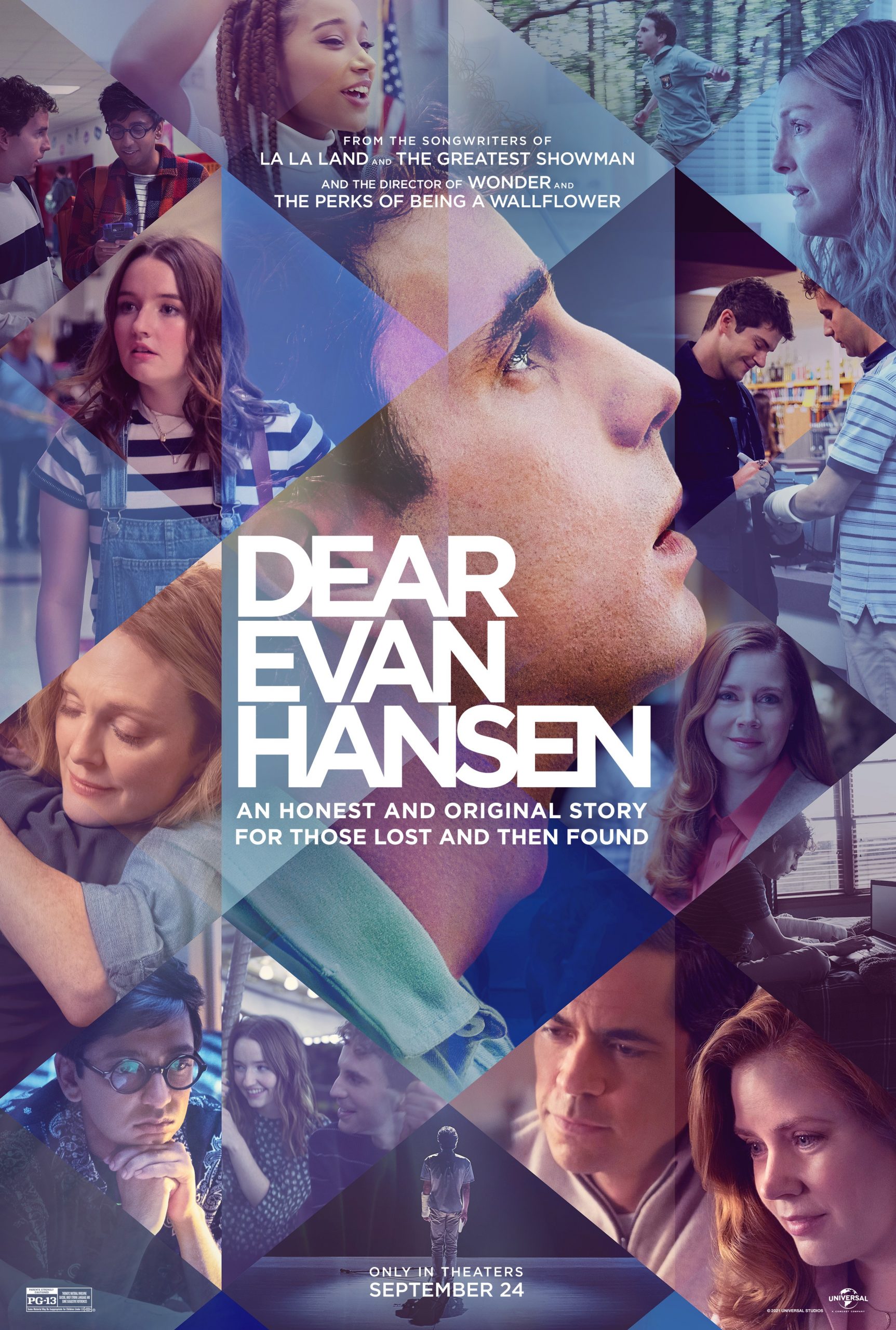 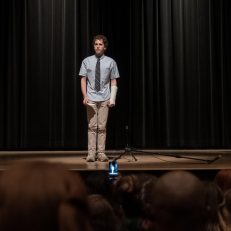 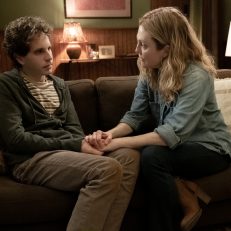 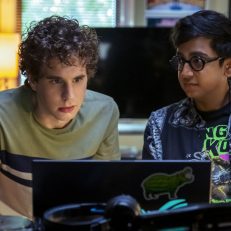 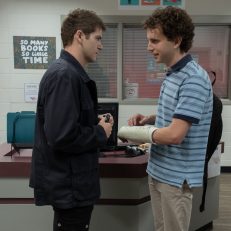 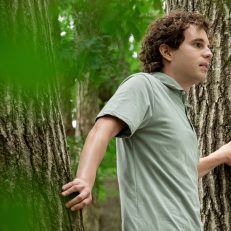 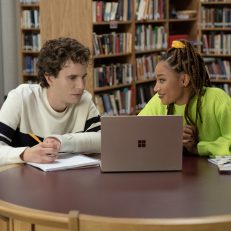 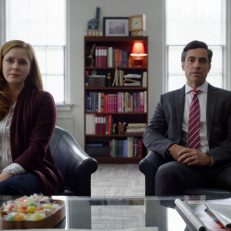 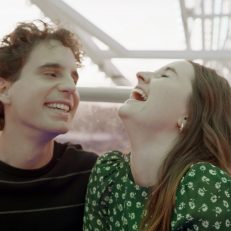