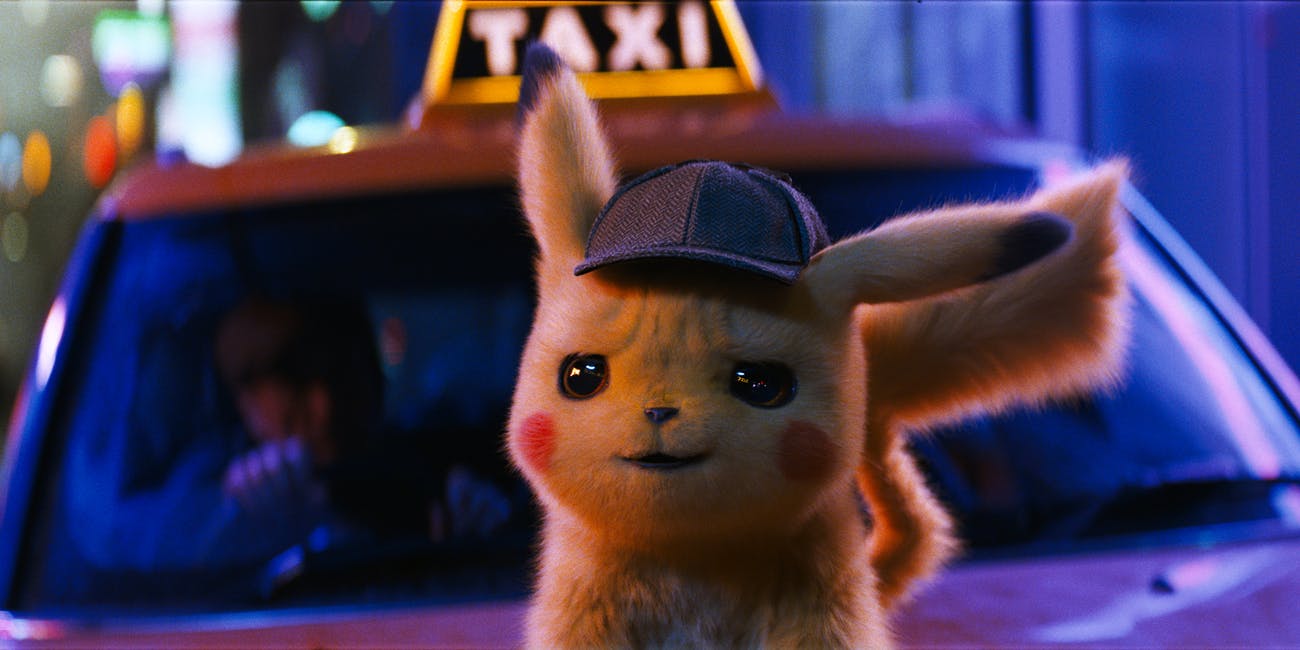 Pokémon took the world by storm back in 1995 when Nintendo released Pokémon Red and Green on Gameboy. My brothers were immediately hooked on the games. It didn’t take long before the success of this video game franchise inspired a television series, a trading card game, action figures, and a series of animated feature films. Pokémon dominated the late 90s and early 2000s, quickly becoming a franchise that would stand the test of time. Now, 20+ years later, a new feature-length film has arrived, and it is sure to appeal to the original fans of Pokémon as well as a generation of new ones.

Detective Pikachu is a live-action film based on a video game of the same name.  It stars Justice Smith as Tim Goodman, a former Pokémon trainer, who learns that his estranged father has gone missing. After being alerted of the news, Tim boards a train and returns to his childhood home in Ryme City. Once there, he begins looking for answers. While searching for his father’s apartment for clues, Tim discovers a unique gift; his ability to communicate with Pikachu (voiced by Ryan Reynolds), his father’s Pokémon. Pikachu believes that he can assist Tim in tracking down his father’s whereabouts. Although somewhat reluctant to do so, Tim agrees to team up with Pikachu as well a local reporter named Lucy Stevens (Kathryn Newton) and her Pokemon sidekick Psyduck. As their investigation begins, they quickly discover evil is afoot as all of the Pokémon living in Ryme City are in grave danger.

When I first saw the trailer for Detective Pikachu, I was astonished by how much it piqued my interest. I remember when Pokémon fever first hit the United States, and everyone around me was addicted to the video games and collecting the trading cards. I was never that into Pokémon which is why I was shocked by how much the film’s trailer made me want to see the movie. You can even say I was excited to see it and wanted to go as early as I could.

There is something to be said when a film based on one of the biggest franchises in the world somehow feels refreshing and unlike anything currently out there. Detective Pikachu reminded me of several movies that were released in the 80s and 90s. Those family-friendly adventures that aren’t made exclusively for children or “fans,” but instead have something for everyone. While the plot isn’t the most original, the film provides plenty of laughs, lots of adventure, a right amount of mystery, tons of heart, and a whole bunch of Pokémon cuteness.

Throughout Rob Letterman’s career, he has directed several family films including Shark Tale and Goosebumps. Detective Pikachu is Letterman’s best film to date. Not only is this film well-directed and visually stunning, but it also has a heartfelt story at its core.  Even though Detective Pikachu is a Pokemon movie, its story is character-driven. The plot centers around Tim trying to figure out his life and who he is. Pikachu may bring the cuteness and the laughs, but Smith is the film’s anchor. While some may have argued that casting him as the lead was a bit of a risky move since he is still relatively new to the acting world, Smith has no problem carrying the emotional weight of this story on his shoulders.

For those of you who were wondering if Ryan Reynolds could pull off the voice of Pikachu, let’s be clear – he absolutely nails it. Reynolds uses his natural charm and translates that into a cute little animated character. He is fully committed to the role and seems to be having just as much fun playing Pikachu as he is when he is playing Deadpool. Maybe this ties into him being a father of two with a third on the way. However, Reynolds doesn’t play the character “too safe.” There are plenty of jokes geared towards adults, which I think is all part of the film’s charm.  Letterman proves that you can still make a PG film that can appeal to adults as well as children. 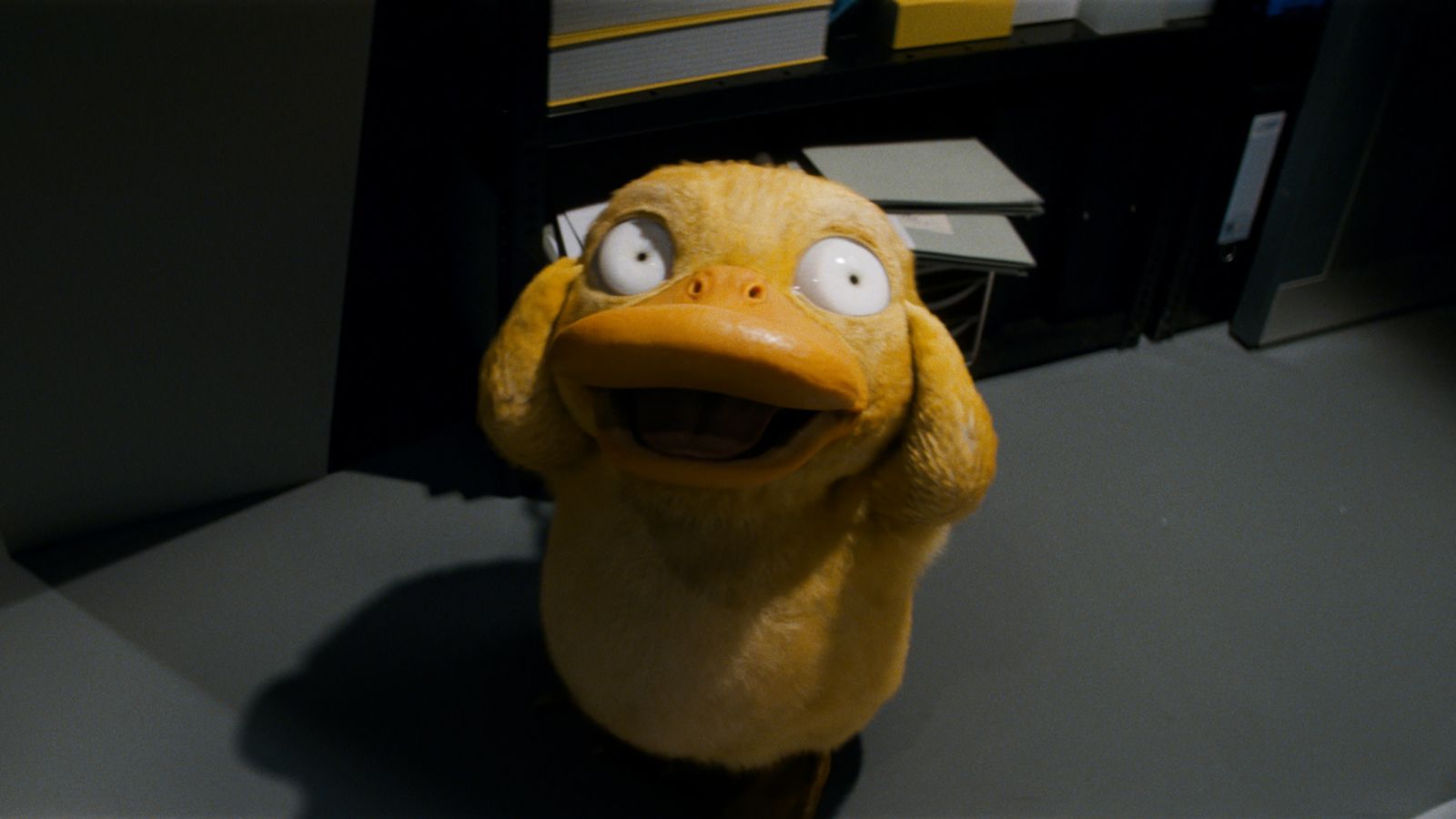 The supporting human cast, as well as the other Pokémon characters, are all great. As a long time fan of Bill Nighy, it is nice to see him in a role he hasn’t played before. Without giving anything away, I was oddly surprised by how his character’s story played out. Kathryn Newton is also rather good in the film. Newton has proven to be a talented young actress on the rise over the past several years. While I loved seeing her in smaller indies like Ben is Back and Lady Bird, it was nice seeing her in a mainstream film, where she was able to have a bit of fun and still play a character with substance.

If you consider yourself a Pokémon fan, I am sure you will adore the film for a plethora of reasons but mainly because you get to see a lot of your favorite Pokemon characters make surprise appearances throughout. If you have seen the trailer, you know that Mr. Mime appears at some point in the film. What you don’t know is that Mr. Mime is featured in a very humorous scene that even those who aren’t familiar with the character will laugh at and appreciate it. While Charizard, Squirtle, and Jigglypuff are only some of the Pokémon who pop up in the film, it is the appearance of Mewtwo that will make fans super happy. Credit goes to the writers for connecting that particular plot point to the first Pokémon movie from 1998.

Wildly entertaining and fun for all ages, Detective Pikachu is the first great family film of the summer. It is the type of film studios just don’t make anymore. Ryan Reynolds is pitch perfect as the voice of Pikachu, and Justice Smith proves he can handle leading roles. Visually stunning and chock full of heart, Detective Pikachu is a refreshing change of pace from the typical summertime fare. While Pokémon fans will adore the film from beginning to end, Detective Pikachu is that rare family-friendly adventure that genuinely has something for everyone.

Scott ‘Movie Man’ Menzel’s rating for Detective Pikachu is an 8 out of 10. 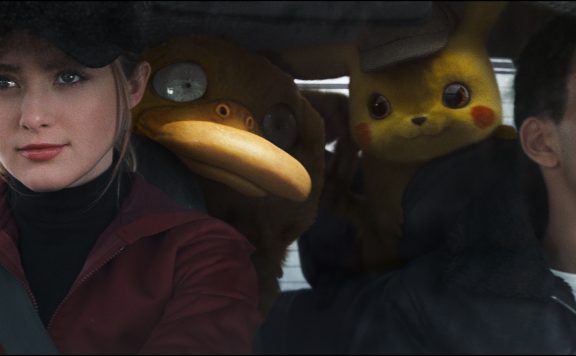