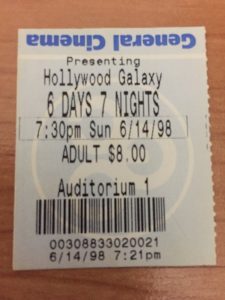 I don’t have a Dirty Work stub because my friends and I snuck into it after seeing 6 Days, 7 Nights. We should have seen them in the reverse order because Dirty Work deserved the money more, although that would have been a real downer after seeing a great comedy. I’m glad I have something of the old Hollywood Galaxy Theater though.

By 1998 the mid-90s cast of SNL had been doing quite well in movies. None were the massive hit of Wayne’s World, Beverly Hills Cop or Ghostbusters before them, but Adam Sandler was cranking out hits and Chris Farley had just found his niche in buddy comedies. It was Norm MacDonald’s turn, and as far as I know everyone who actually saw Dirty Work liked it. There’s just very few of us.

Dirty Work has the typical plot of an SNL star vehicle. Someone needs a lot of money really fast so they come up with a wacky plan. Mitch (MacDonald) doesn’t become a gigolo or a pro golfer, but opens a revenge business with his buddy Sam (Artie Lange). The reason is Pops (Jack Warden) needs a heart transplant.

Revenge is usually for nerds but regular folks deserve revenge too. Their plans are pretty clever too, not just payback. Warning a fraternity about fake cops then calling real cops is pretty layered. 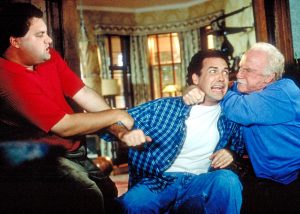 In between revenge gags, that irreverent humor is unique to MacDonald, and Bob Saget making his feature film directorial debut. Pops has an illegitimate son because he didn’t have modern day birth control, like pulling out. They do a whole scene on a roof and reveal Sam was peeing the whole time. They have these sweet nostalgic moments that end with an edgy dirty joke. 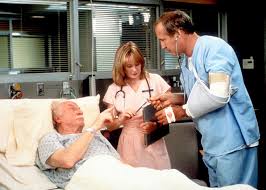 Chevy Chase, who plays the doctor, told Howard Stern Dirty Work was supposed to be R rated. I can see it but really don’t feel the movie lacks edge for being PG-13. NBC refusing to sell ads for it after they fired MacDonald from SNL surely hurt more. And also remember MGM was not a good distributor in the 90s. Outside of James Bond they had nothing. Tank Girl, Larger than Life, Getting Even with Dad… I guess if they’re going to make your movie, it’s better than not making a movie at all. 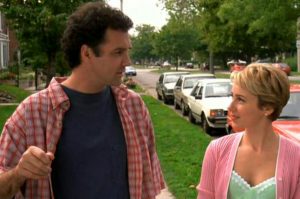 Dirty Work incorporates MacDonald’s “note to self” schtick. It’s not afraid to make jokes that don’t make sense either. If the doctor lost a bet on Rocky III, he must have bet on the second fight. He could’ve won if he bet against Rocky in his first fight against Clubber Lang.

A live TV commercial is not something that existed in 1998. But for a comedy and a way to explain how they advertise and for an absurd setpiece don’t take it so seriously, it’s fun. I’m also tickled by how many jokes involve whores, as if being a prostitute for a living is just the funniest thing a comedian could imagine to make fun of. 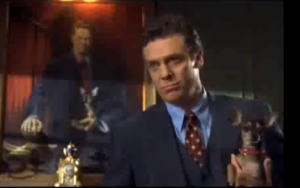 It always bothered me that they didn’t confirm that Cole (Christopher McDonald) owned the building he paid them to wreck. It seems like Mitch would be savvy enough not to get played like that. Although I do like the immature conviction that he’s doing it to a whorehouse and ambiguous misunderstandings only solidify his conviction. I suppose it makes sense that a startup got in over their heads although this comedy isn’t too concerned with the business ethics of that. 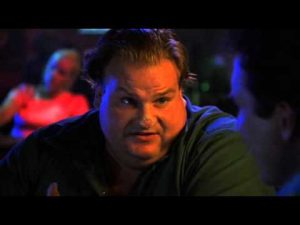 If you weren’t sure by the premise and the cast (which includes cameos by Farley, Sandler, Gary Coleman and John Goodman) that this was a ‘90s movie, the soundtrack will make sure you know. “Semi-Charmed Life” and “Tubthumping” are featured prominently, and those couldn’t have been cheap since they were already radio hits. 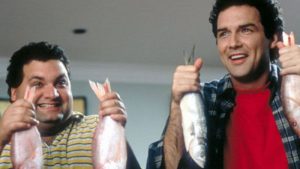 MacDonald got one more movie and two TV shows. I suppose the transition to film is dependent on those first few roles. Dirty Work was poorly distributed and Screwed was a genuine misfire by acclaimed filmmakers and comedians so seemed like a good idea. Perhaps MacDonald’s brand of absurd irreverence is best suited to standup but I think he didn’t get a fair chance in film. Television maybe gave him his due, but Dirty Work works. 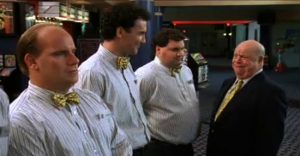 MacDonald keeps cameoing in Adam Sandler movies. Sandler always had a bigger following but can you honesty say Grown Ups, That’s My Boy or those Netflix movies are better than Dirty Work?

[caption id="attachment_54745" align="alignright" width="225"] I don't have a Dirty Work stub because my friends and I snuck into it after seeing 6 Days, 7 Nights. We should have seen them in the reverse order because Dirty Work deserved th...
0
Average User Rating
0 votes
Please sign in to rate.
Cast:Artie Lange, Jack Warden, Norm MacDonald, Traylor Howard
Director(s):Bob Saget
Writer(s):Frank Sebastiano, Fred Wolf, Norm MacDonald
Genre:Comedy