‘Doctor Strange’ Teases the Trippy Side of MCU in IMAX

For those lucky enough to attend Marvel’s Doctor Strange: Expand Your Mind IMAX event last night, it was undoubtedly out of this world. Two years ago, Marvel ran a similar event prior to Guardians of the Galaxy, debuting 17 minutes of footage. With Doctor Strange, it was simply a 15-minute super trailer, highlighting various parts of the film. If you’ve seen the previous trailers over the past few months, you have a general idea of what to expect.

Benedict Cumberbatch, who plays Doctor Strange, introduced the events and showed off his powers by expanding the IMAX screen to its full size. Cumberbatch also mentioned that one hour of the film was specifically formatted for IMAX. That should be an aspect ratio change for certain sequences rather than film partially shot in IMAX like Interstellar or The Dark Knight Rises.

We’re then introduced to Doctor Strange. He’s a narcissistic neurosurgeon who could give Tony Stark a run for his money. Like Stark, he’s gifted at what he does, but he needs to brought down to Earth a bit. More on that later. We get a few flirtatious moments with his colleague Christine Palmer (Rachel McAdams), which from what we’ve seen so far conjure up some fine chemistry. It’ll be interesting how she fares against the other MCU previous love interests. Granted, the bar should be much higher.

The next major sequence is Strange’s car accident en route to an event where he’s the guest speaker. The editing’s a bit fast-paced, but the 3D is top-notch, particularly with the shattered glass coming towards the audience. But it’s not until Strange recovers from his near-fatal injury and locates the Ancient One (Tilda Swinton) when the event really takes off. His narcissism is taken down a few pegs and we begin to see what he can bring to the MCU.

Not only that, but we’re introduced to the mysticism and multiverse of the MCU. Labelling it trippy is an understatement. The more Doctor Strange learns about the arts and what lies beyond the physical plane does it take on a new level of entertainment. Cliche as it may sound, but this is The Matrix meets Inception of the MCU. All that’s missing is some Cumberbatch “Bullet Time.” One can only hope. The worlds of the multiverse continues to grow more and more bizarre as even Strange’s own appendages begin to take on some freaky forms.

Exclusive Doctor Strange Poster Given Away to Screening Attendees 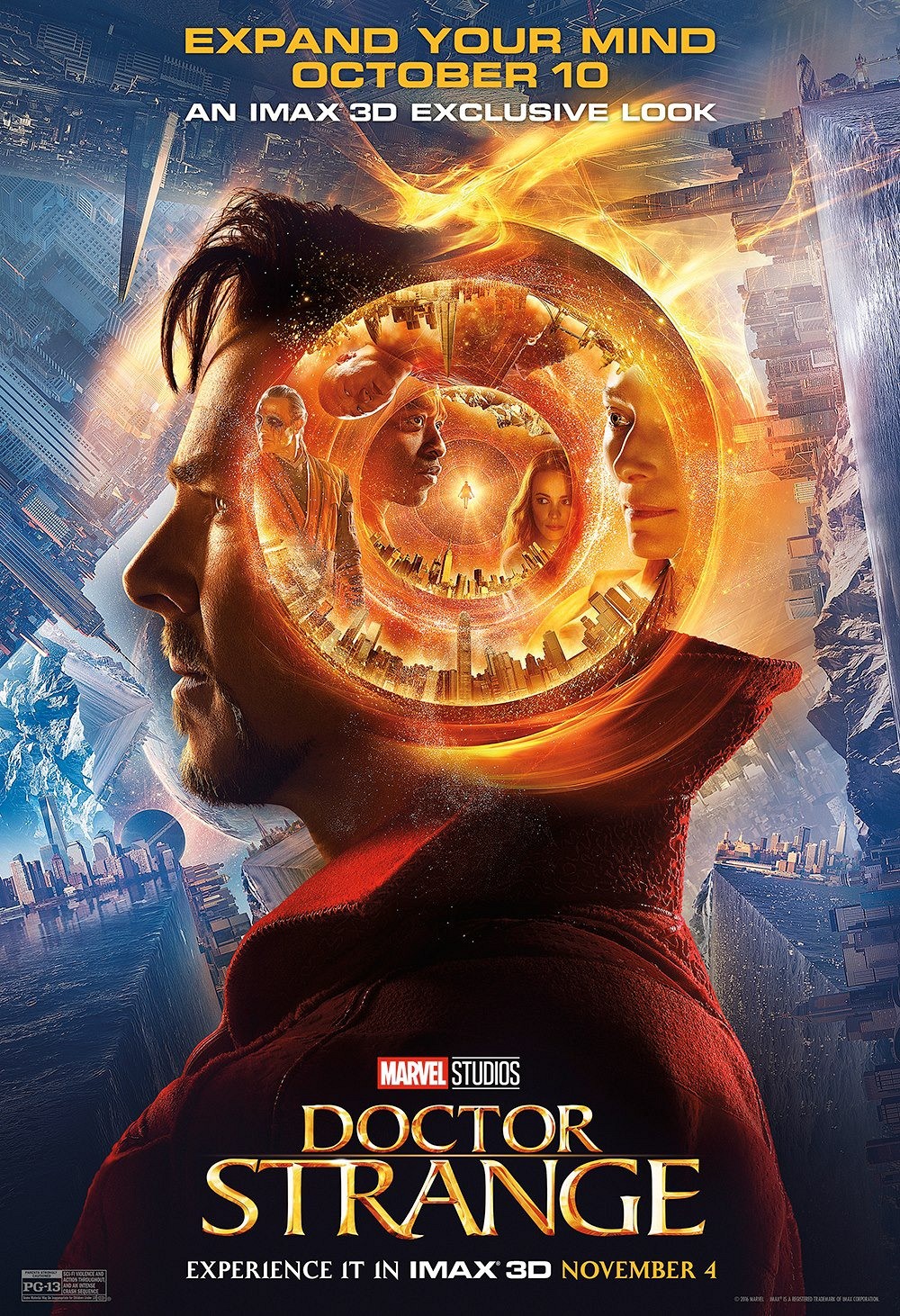 The MCU has had its fair share of reasons to go see their films in IMAX. Whether it be the New York showdown in The Avengers or the all-star airport battle in Captain America: Civil War, there’s more of a reason to pay top dollar. With Doctor Strange, the visuals seen already are worth the price of admission. It’s hard to say what’s more impressive in IMAX, the multiverse or the reality bending sequences.

Besides Cumberbatch, the rest of the cast gets a few moments to shine here and there. McAdams and Swinton are sure to be solid additions to the MCU. Chiwetel Ejiofor, Benedict Wong and Mads Mikkelsen have their moments too. It’s a little tease of who these characters. Let’s hope that Mikkelsen into the category of the underwhelming MCU villains as the mysterious Kaecilius. But we’ll see in a few short weeks. Though, the one surprise we won’t have to wait for is Stan Lee’s cameo. It’s better to keep it under wraps, but rest assure that it received the most laughs at the screening. Cheers too.

It boils down to this. Doctor Strange is a must-see in IMAX 3D come November 4th. And to be completely honest, the accolade of best superhero film of 2016 is still very much up in the air. Marvel’s had its fair share of oddballs over the last few year, especially with Guardians of the Galaxy in 2014. But this one could be in a world (or multiverse) of its own.

What We Learned at ‘Doctor Strange’ Expand Your Mind IMAX Event

'Doctor Strange' Teases the Trippy Side of MCU in IMAX For those lucky enough to attend Marvel's Doctor Strange: Expand Your Mind IMAX event last night, it was undoubtedly out of this world. Two years ago, Marvel ran a similar event prio...
0
Average User Rating
0 votes
Please sign in to rate.