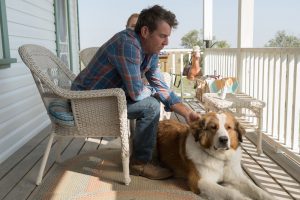 A Dog’s Purpose was a sweet movie about a dog reincarnated through the ages. It began when Ethan was a boy and they reunited when Ethan was a grown man (Dennis Quaid). Since that brought us pretty much up to present day, I expected the sequel to take the dog into the future with flying cars and robot dogs. That is the first of many times A Dog’s Journey disappointed Franchise Fred.

Starting out with Bailey (voice of Josh Gad) and Ethan is good. Ethan and Hannah (Marg Helgenberger) are taking care of Hannah’s daughter-in-law Gloria (Betty Gilpin) and their granddaughter CJ after Hannah’s son has died. A bitter, drunk Gloria takes CJ away from her grandparents and when Bailey dies, he’s reincarnated as Molly whom CJ (Abby Ryder Fortson) adopts.

Bailey as Max, a Yorkshire Terrier (voiced by Josh Gad) in A Dog’s Journey, directed by Gail Mancuso.

A Dog’s Purpose was a series of lovely vignettes that told complete short stories, until the last one brought back Ethan as an older character. All of Bailey’s lives in A Dog’s Journey are centered around CJ at various stages in her life. Sticking to one long story is a problem for A Dog’s Journey. You could say the sequel bit off more than it could chew! Eh? Eh? 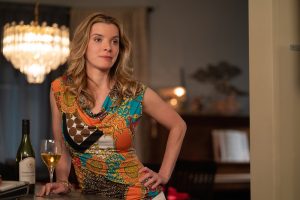 One dimensional characters remain caricatures for longer than a single vignette now. The film has no sympathy for Gloria who is bitter that her music career never took off, fat shames her 10-year-old daughter with “helpful” advice and blames her teenage daughter (Kathryn Prescott) is attacked by her shady ex-boyfriend. I’d like to believe Gloria is hurting so much, mourning the unexpected loss of her husband, that there’s still someone inside there who could warm up with a little genuine love, but the movie has her reject any genuinely loving people in her life. The film pays a little lip service to redemption for Gloria but it doesn’t seem really interested in her as a human being. 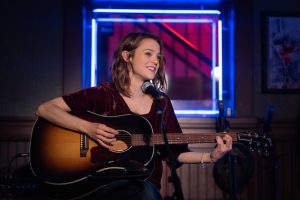 The main through line is CJ herself trying to mount a music career, which by the time she’s an adult is like a bad version of Roger’s arc in Rent, or Marty McFly being afraid to send his demo to the record label. Like, you’re a grown up now. If you want to be a singer, fucking sing. If you’re not good enough to book gigs, you’ll find out soon enough and can move on, but of course this is a movie so that’s not what she finds out. 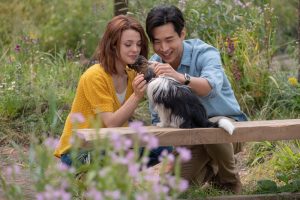 (from left) – CJ (Kathryn Prescott), Bailey as Yorkshire terrier Max (back to camera, voiced by Josh Gad) and Trent (Henry Lau) in A Dog’s Journey, directed by Gail Mancuso.

CJ’s life is full of one-dimensional assholes who doesn’t believe in her. Her boyfriend (Kevin Claydon) when she’s an adult living in New York didn’t support her music. Her only support system is her various dogs, and her childhood friend Trent (Ian Chen, Henry Lau) who always had eyes for her. Ethan and Hannah would’ve been supportive if Gloria hadn’t shut them out of their lives. Look, maybe some people are plagued by haters and they have to fend for themselves. It’s an unfortunate cycle, but it doesn’t feel like A Dog’s Journey understands that. It feels like it’s just convenient to have naysayers in CJ’s life.

(from left) – Young CJ (Abby Ryder Fortson) and Bailey as Molly, a Beaglier (voiced by Josh Gad), in A Dog’s Journey, directed by Gail Mancuso.

So let’s try and figure out this timeline. Maybe I misunderstood what year Ethan was living on the farm. Maybe that was only the mid ‘80s. The music seems late ‘90s by the time CJ is a teenager. That would bring her closer to the present when she moves to New York and maybe reaches present day by the end of a few more dog’s journeys.

Bailey as Big Dog, an African Boerboel (voiced by Josh Gad), in A Dog’s Journey, directed by Gail Mancuso.

This continuous story requires a lot of coincidences to place new reincarnated dogs with CJ, and to have people from her past randomly show up in New York. I’ve got to wonder, was the book this much of a stretch? Already reading the Wikipedia summary sounds more interesting than the movie so I’m going to go with this is a lousy adaptation. 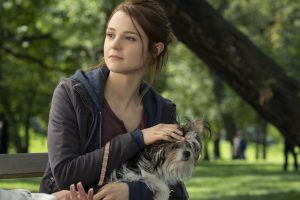 They still get some amazing animal performances out of the dogs. Gad’s lines are a bit more obvious talking about sniffing butts and chewing socks, but when he loves being hugged ‘til he can’t breathe, it’s cute.

If this franchise can survive A Dog’s Journey, maybe I’ll finally get my flying cars and robot dogs in part three. That means I’ll have to wait until part four for space dogs.