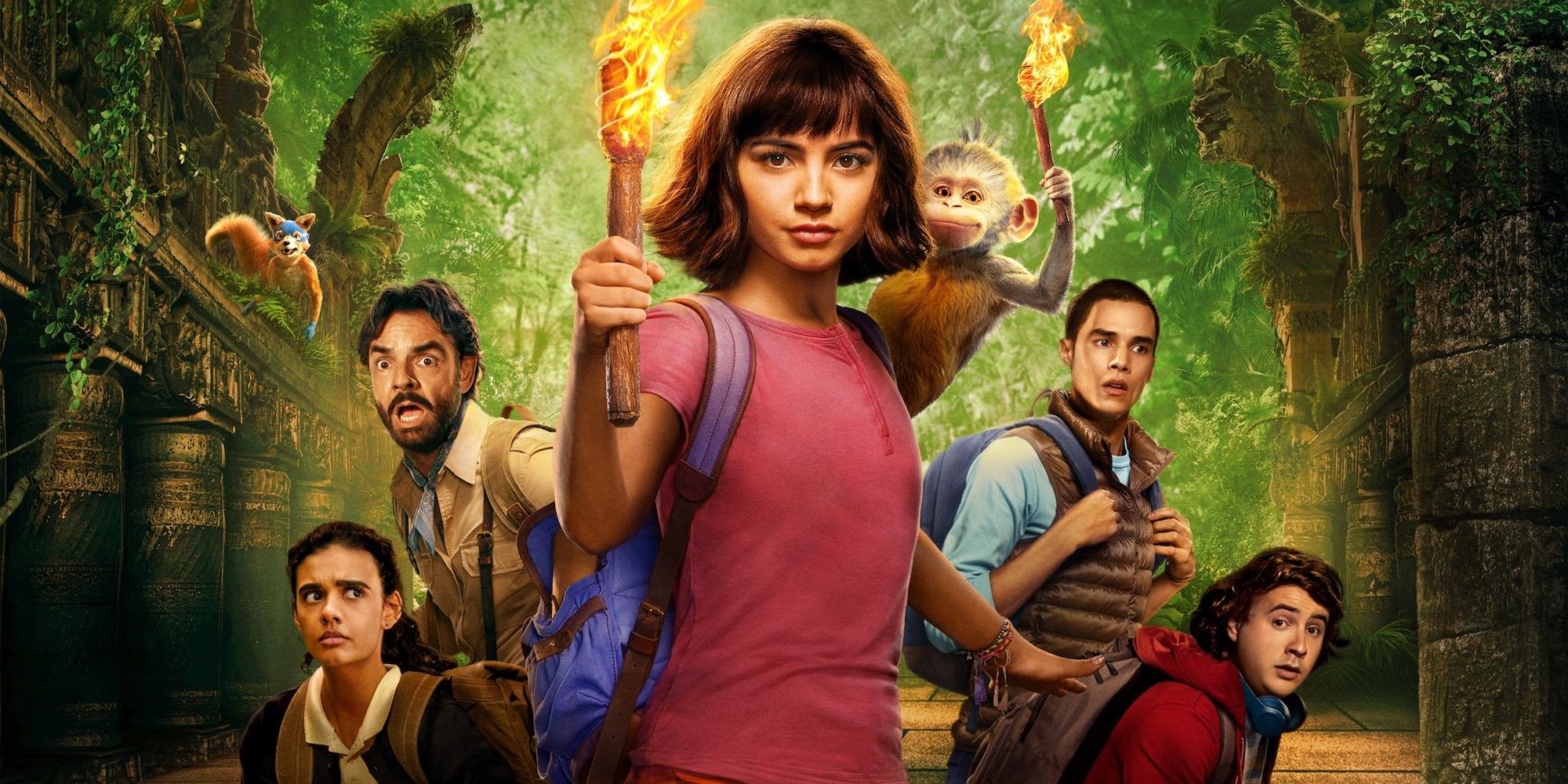 Dora and the Lost City of Gold Review: A Welcomed Reprieve For Franchise Fatigue

DORA AND THE LOST CITY OF GOLD is an energetic delight. The movie’s positive outlook, cultural awareness, smart & bright Dora is what’s needed in today’s live-action, family cinema. Isabela Moner lights up the screen giving Dora a Pollyannaish vibrancy that’s fun, inspiring and a welcome reprieve from Franchise Fatigue. You might even sing!

Plot-wise, DORA AND THE LOST CITY OF GOLD is pretty simple; Latinx Trailblazing Heroine, Dora, goes exploring for her parents who are need of rescue from treacherous treasure-hunters searching for Parapata: the ancient Lost City of Gold.  If it sounds like you may have seen this before, you have. The movie borrows somewhat liberally from INDIANA JONES AND THE LAST CRUSADE.  The pre-teen isn’t going to care. To the movies credit, it knows its audience and stays true to the iconic Nickelodeon animated series.

In fact, right from the get-go DORA AND THE LOST CITY OF GOLD pays clever and often humorous homage to its roots.  In quite a funny scene (that I believe is in the trailer) where 6yr old Dora is at the dinner table with her family.  She exclaims “Deliciouso!” after her first bite, then breaks the third wall by looking straight into the camera asking: “Can you say DELICIOUSO?” Her father, Cole (Michael Pena) looks behind him as if “who are you talking to?”  It’s funny and there are more sharp nods to the animated show as the movie goes.  The movie could’ve just relied on that one note type joke to get by.  Thankfully the writers were smarter than that. Nicholas Stoller and Matthew Robinson respectfully bring Dora to modern-day. It is here is where the movie really excels. 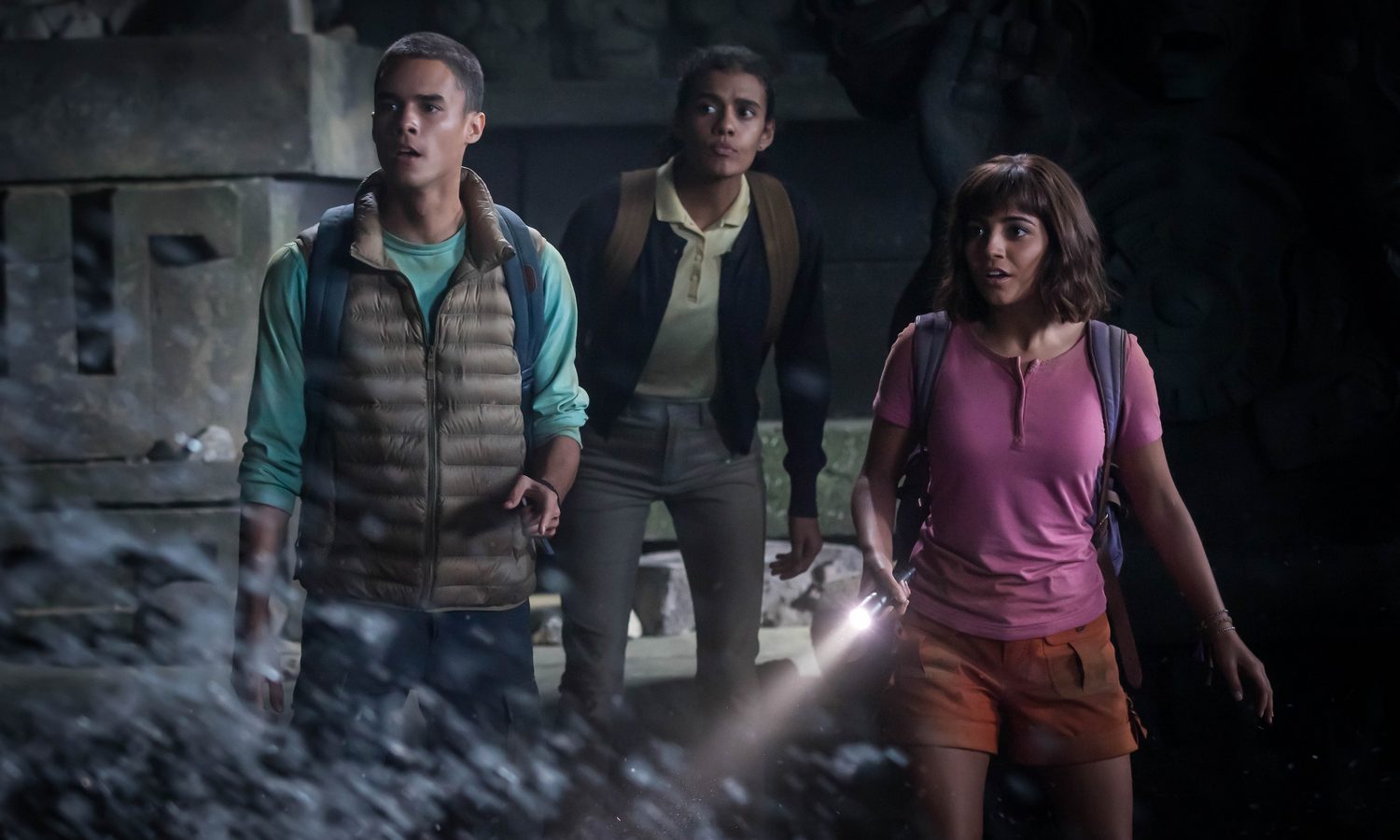 DORA AND THE LOST CITY OF GOLD provides not only a positive role model for girls and boys alike it’s efficacious outlook feels fresh.  Dora shows it a good thing to be smart. Even if that sets you apart, as difficult as it may be, stay true to yourself.  DORA also organically exemplifies a welcome cultural awareness and diversity.  Dora’s Latinx roots are brought front and center. The movie never shies away from Dora speaking in her native tongue.  The transition from English to Spanish is fluid and the subtitles NEVER takes you out of the movie.  The family dynamic never feels saccharinely.  From Dora’s parents played by Michael Pena and Eva Longoria to her Abuelita played by Adriana Barraza, they nurture Dora’s almost pollyanaesque outlook.  They hit the right cultural inclusive beats, including Dora’s fellow explorers and friends.  Dora’s Primo, Diego (Jeff Wahlberg – yes, that Wahlberg…his Dominican nephew), Sammy (Madeleine Madden) the schools smartest student, until Dora arrives and Nerdy classmate Randy (Nicholas Coombe).  Rounding out the Latinx cast is Latin American superstar Eugenio Derbez.  The casting of bi-lingual, multi-talented, Isabela Moner isn’t inspired as much as it’s ideal.  She is a rising star who has showcased emotional and physical skills as well as the heart. Each of her roles thus far has been distinctly different. From TRANSFORMERS: THE LAST KNIGHT to SICARIO: DAY OF SOLEDADO, to INSTANT FAMILY, Moner brings all that she’s done before to the table here and adds the brightness of the sun as Dora.

It’s clear, like the television show, the movie embraces and encourages cultural diversity.  Not just by working together but by being together for one another.  The theme isn’t sublime or in your face.  It’s innate and worthwhile.

DORA AND THE LOST CITY OF GOLD sort of throws back to the innocence and kind of live-action movies Disney released in the late ’60s and ’70s.  Non-offensive, non-threatening with good-natured action and comedy.  Dora is upbeat, positive, diverse and a wonderful symbol of Girl Power. The 8yr old in me loved the characters and adventures of this movie.  The adult appreciated its tone and thematic resonance set in today’s sometimes cynical landscape.

Demetri’s Dora and the Lost City of Gold Rating: 4 Fingers

Dora and the Lost City of Gold Review: A Welcomed Reprieve For Franchise Fatigue