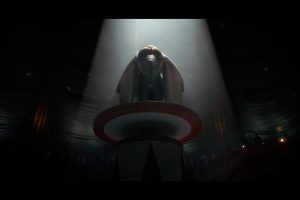 Dumbo is the Star is Born of flying elephant movies. It’s about the crushing demands of success on a burgeoning talent, only because it’s Disney there’s no tragic romance. Instead, there’s a scary grown-up. 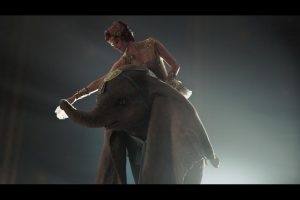 In the beginning, it’s just a struggle to get Dumbo to perform at all. Then when Max realizes he can fly, it’s getting the talent to perform on cue. Vandervere keeps complicating the act, as corporate entertainment moguls are wont to do. Dumbo didn’t ask for any of this. He was just born with a natural talent and everyone’s trying to exploit him. Dumbo does include a very nice anti-captivity message. 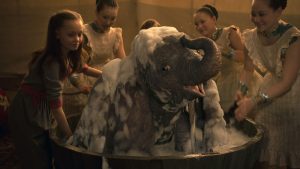 The visual effects are good. They bring a lot of character to Dumbo’s face and he’s adorable as a baby finding his way in the world. It looks a little wonkier when Colette rides him, but there’s only a few scenes of that. The Pink Elephants scene is nicely realized too.

Danny Elfman’s theme is triumphant, as if there’d be any doubt. I heard some hints of Edward Scissorhands in there too, but since Edward is tragic, Dumbo’s theme uses the bittersweet moments a tad differently. 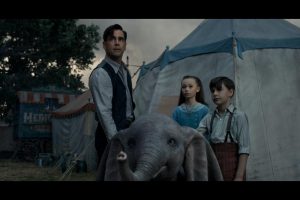 I haven’t actually spoken about the movie’s main human characters. That’s because the movie sort of overshadows them. Holt (Colin Farrell) comes home from the war to raise his kids, Milly (Nico Parker) and Joe (Finley Hobbins), as a single dad. They’re Dumbo’s trainers but it’s really Dumbo’s story coming into his own abilities. 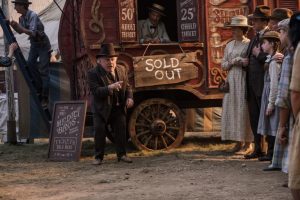 I liked Dumbo because I can relate to the cautionary tale of the entertainment industry. If you don’t work in a job with such dramatic pitfalls, your mileage may vary, but there’s still a cute flying elephant with or without the metaphor.