I’ve begun scanning the premium cable channels for movies I’ve either never seen or want to revisit. I pay for them so I should use what they offer more than just the original series I cover. Since DirecTV gives me 200 hours of HD DVR  storage, I can rack up a lot of movies. Consenting Adults gave me equal parts nostalgia and new appreciation for the film. 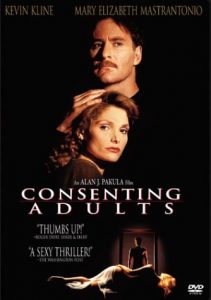 The poster that got me into the theater in 1992.

I saw Consenting Adults when it came out in 1992, at the movie theater where I would go to work part time two years later (shout out to Apex Cinemas in Annapolis, MD). Back then I was seeing every movie that was released just in case it might be good. Back then it was possible to see every movie in wide release. There were only two or three new ones per weekend. At only 14, I was way into the ‘90s wave of erotic thrillers that was kicked off by Basic Instinct and The Hand That Rocks the Cradle. I was a fan of Kevin Kline already from A Fish Called Wanda and Mary Elizabeth Mastrantonio from The Abyss and Robin Hood: Prince of Thieves. Kevin Spacey was an unknown quantity to me at the time and I didn’t even realize he’d also been the bad guy in See No Evil, Hear No Evil.

The salacious hook was wife swapping. Spacey’s character wanted to convince Kline’s to sneak into each others’ bedrooms one night without their wives knowing. Later in the ‘90s wife swapping became more of a kinky taboo, at least in the realm of adult movies and urban legends. I’m sure the filmmakers behind Consenting Adults could not have imagined there would be multiple reality TV shows geared towards family audiences with the premise of swapping wives (without the sex of course). Now I wish someone had made a ‘90s thriller about the urban legend of the woman with her dog and a jar of peanut butter. 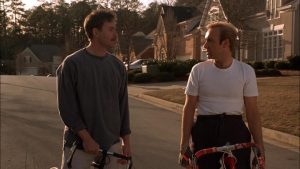 Come on, Richard, why won’t you swap wives with me?

Kline plays Richard Parker, a suburban father who’s a little tired of his advertising job writing jingles, and Life of Pi definitely stole his name for the tiger in their movie! Spacey plays new neighbor Eddy Otis, and the first sign that everyone is taking Consenting Adults seriously is that when Eddy brings up the idea of wife swapping, Richard treats it like the inappropriate suggestion it is. By the third time Eddy goads him about it, Richard quite rightfully takes a stern tone and says, “Cut it out.” Richard isn’t refusing to swap wives because he’s scared to. He’s refusing because he actually doesn’t want to be an adulterer.

Of course, there’s no movie if he maintains the high ground, and the way Consenting Adults peer pressures Richard Parker into wife swapping is believable, if a stretch. When Richard’s wife (Mastrantonio) asks why he’s not getting along with Eddy anymore, it would be nice if Richard just said, “Eddy wanted to swap wives. Not just once as a joke. He kept bringing it up.” But perhaps the early ‘90s bro code prohibited outting Eddy quite like that. 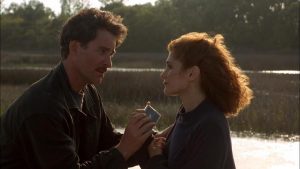 Please play this tape. I won an Oscar, you know.

The mystery works itself out somewhat typically, but it’s still fun in the end to see Kline desperately choking out security guards to find that one piece of evidence to clear his name and get his family back. Nobody is phoning it in, and if anything Spacey might be going too hard. This was before The Usual Suspects and Se7en so he wasn’t in the position to choose his offers. If they hired him to be the over the top villain, he did his job dutifully.

I love the Hollywood Pictures era of films, which came under Disney after the success of their Touchstone label. Under Jeffrey Katzenberg, Touchstone’s philosophy was to make mid-budget movies that would eventually turn a profit simply by existing in the video market. Hollywood Pictures seemed to follow suit and that’s how we got movies like Consenting Adults. What’s a crazy idea that we don’t need a lot of money to make? How about a wife swapping murder mystery.

I’ve begun scanning the premium cable channels for movies I’ve either never seen or want to revisit. I pay for them so I should use what they offer more than just the original series I cover. Since DirecTV gives me 200 hours of HD DVR  stor...
0
Average User Rating
0 votes
Please sign in to rate.