It was one thing for a film to call attention to itself for being made within the last year, during the pandemic, and released within that same period. In the Earth finds itself in a more interesting position, as it already had a premiere at the Sundance Film Festival, only to now be released as vaccinations are on a steady rollout. As a horror film conceived with the pandemic in mind, does one see a difference in the timeframe it now sits in? Did it have a stronger impact on audiences quarantined in their homes versus those now in a position to leave them? The film’s bleak nature, thick atmosphere, and psychedelic journey prods at these questions, with hope the viewer doesn’t get lost in the woods.

Set in England, as the world searches for a cure to a fatal virus, a scientist, Martin (Joel Fry), and a park scout, Alma (Ellora Torchia), head into the forest on an equipment run. The two have hopes of locating a fellow scientist, Olivia (Hayley Squires), who has dropped all contact. During their travels, Martin and Alma face various challenges and meet a stranger, Zach (Reece Shearsmith), who has his own agenda. There’s also the matter of the forest, which appears to be coming to life around them.

After a few bigger-budgeted efforts, writer/director Ben Wheatley returns to his smaller-scale horror roots, which not only works as a necessity but a solid exercise in minimalism. With a limited cast, a natural, isolated environment, and a deceptively thin story, Wheatley shows what innovation can deliver when working within certain limits to deliver an intense and intriguing feature. And thanks to the means available, it is the deliberate mood of In the Earth that ultimately makes it a success. 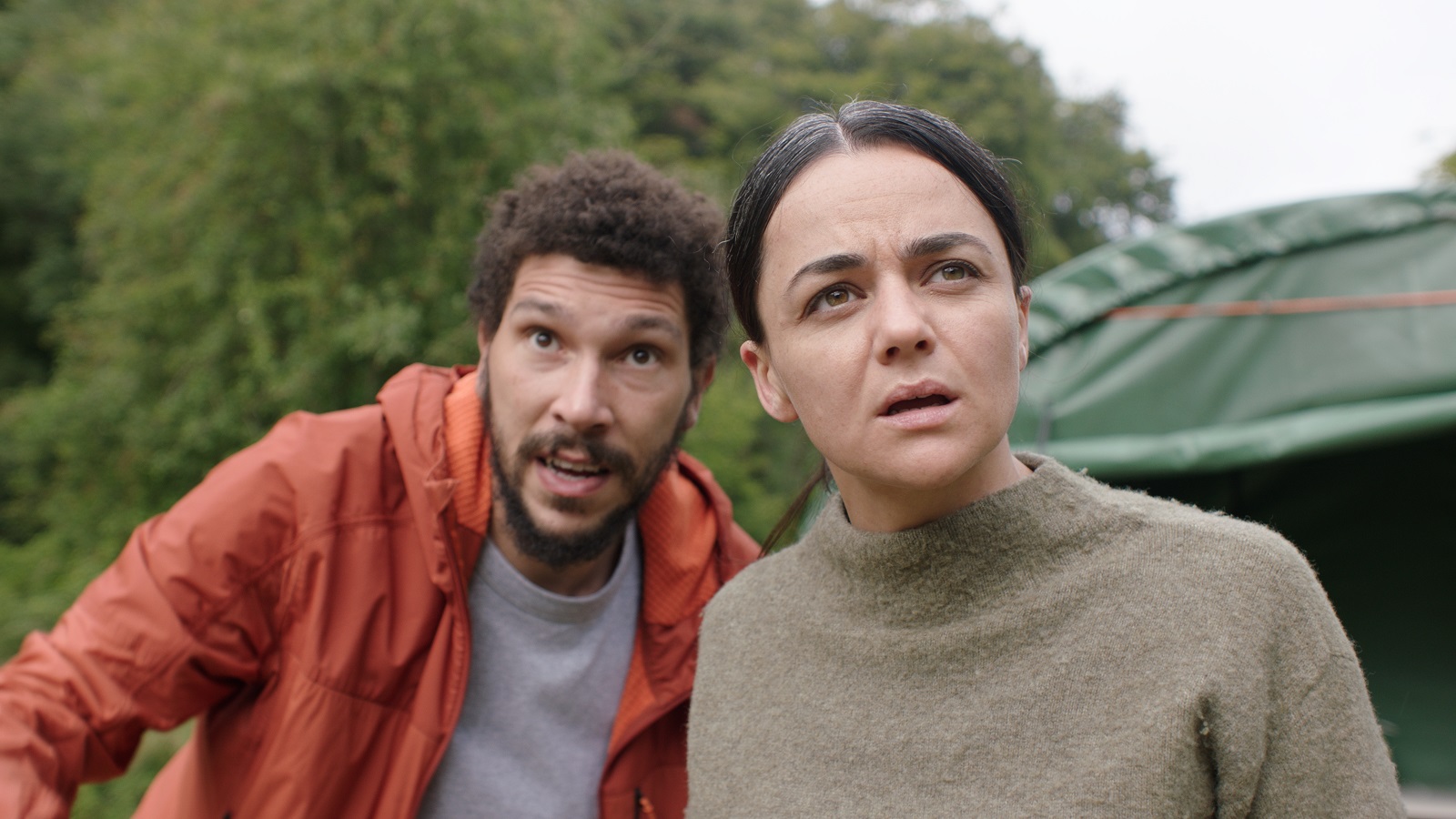 Stories about innocents venturing into the woods are nothing new. The film makes little effort to disguise where things are going. How can it? Beyond the decades of examples one could lay out to show what a bad idea looks like in a horror film, there’s an uncanny ability In the Earth plays to its advantage when it comes to playing on these characters’ paranoia. With such sparse settings, the sight of anyone brings everyone’s guard up immediately. The film opens with characters using gas masks and hazmat suits to screen newcomers, setting up a precedent as is, so the idea of venturing into the unknown means danger is constantly afoot.

Still, even with a sense of menace lurking nearby our central duo, the film introduces a few wrinkles. It’s here I should mention the severe level of violence featured in the movie. This should be nothing new to those familiar with Wheatley’s films, but much like fellow British horror director Neil Marshall, when Wheatley films violent scenes, he makes it so the viewer can really feel that pain. Without getting into where this violence comes from, a bloody body horror element goes along with the film’s other asset – its trippy nature.

Playing on these characters’ mental state, the way they are absorbed into this forest calls to mind films such as Mandy and Annihilation, let alone The Blair Witch Project. Wheatley smartly sets up some key ideas early on, brings in some new information later, and holds off from certifying just how affected the environment may be by something rooted in either science or the supernatural. That said, we have intelligent characters who attempt to assess their situation in pragmatic ways. This doesn’t stop the film’s visuals from taking the viewer on a ride, but there is an understanding that all questions may have answers, but they also may not be ones everyone will like to hear. 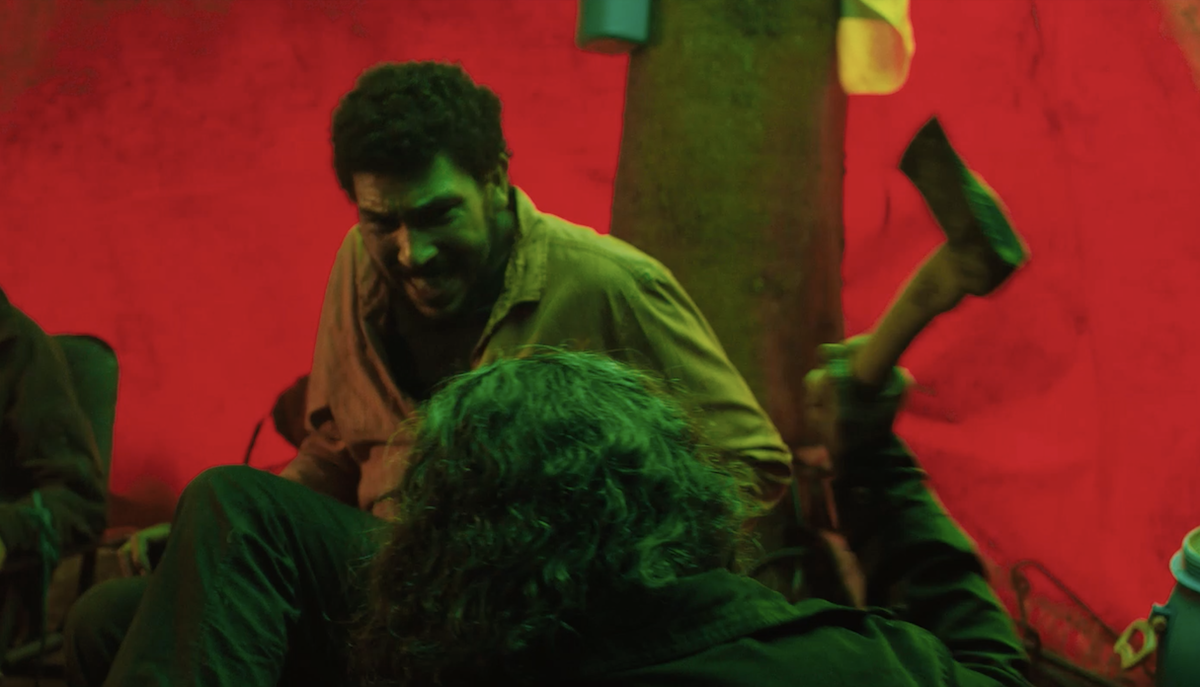 Does this make In the Earth about anything specific? There’s the surface level tension focused on how good people are driven to extreme lengths and questioning everything around them, given the pandemic fears haunting the population. Whether or not this will have the same impact in the years to come depends on how strong the response is to the film. There have been other films about pandemics and quarantines in the past that are first-rate, but one can’t deny this film’s timing.

Digging deeper, the two leads are people of color, who suffer based on specific actions that could suggest a connection to which populations have had to deal with the most during this Covid-19 situation. It’s especially relevant when considering which of these characters have power and what the regard is for the area surrounding these people. As In the Earth primarily functions as a tense film looking to scare audiences, it finds its ways to get under a viewer’s skin quickly when considering who is at risk and what the threat is. 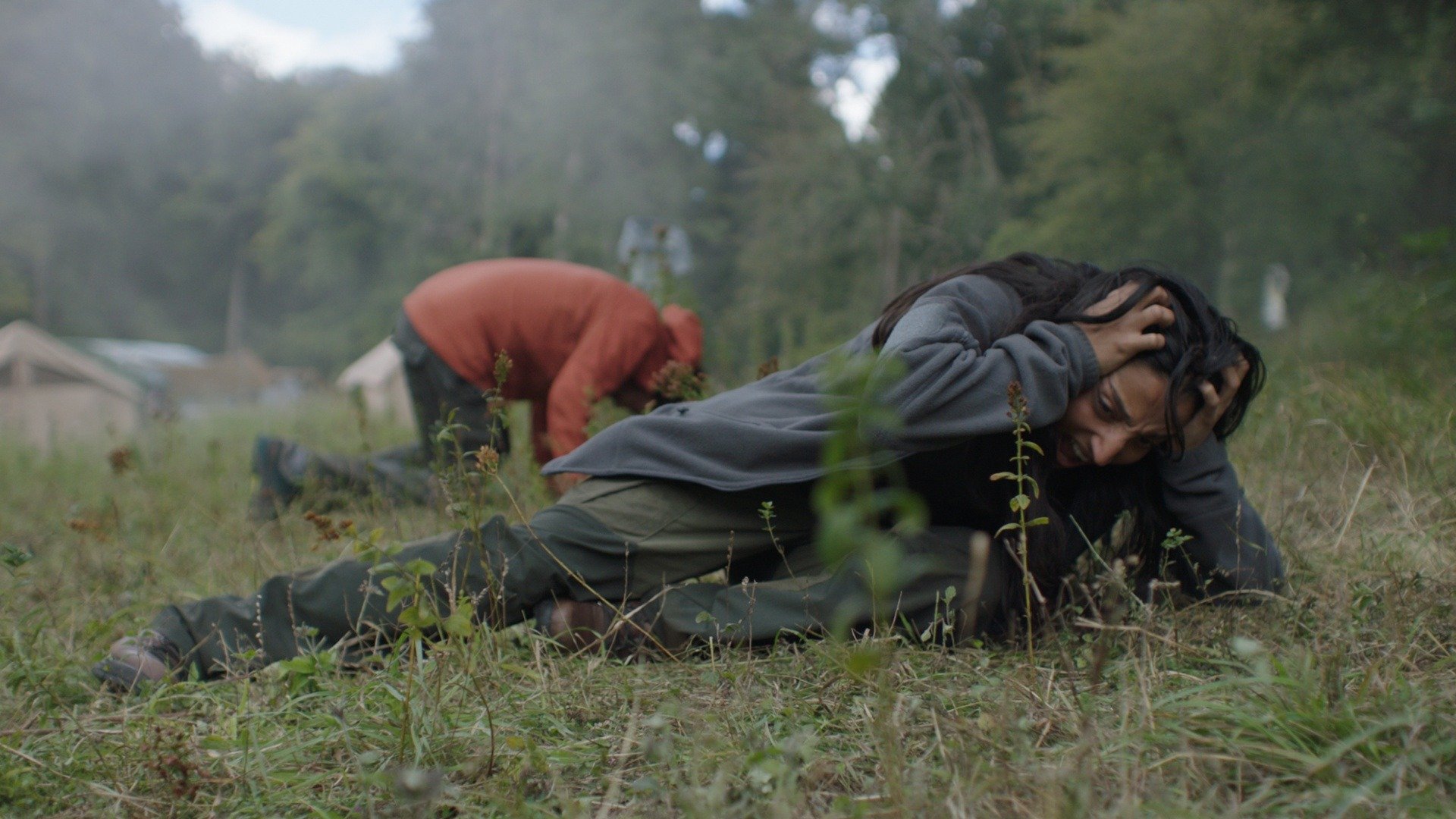 Further adding to the level of terror are the strong cinematic choices. Cinematographer Nick Gillespie captures the stark atmosphere effectively and later finds plenty in signifying how the forest responds to intruders and the means some characters have developed to deal with this. Clint Mansell’s excellent score only adds to the proceedings, delivering a haunting tone and knowing when to drop out entirely at the right moment.

In the Earth excels at creating an eerie experience for genre fans in the mood for something dark. Wheatley is not one to make it a punishing affair all the way through, so added moments of bleak humor do help amid the trippy pushes towards more extremes. Finding a balance between folklore-based spirituality and the human craziness inspired by the pandemic only add to the austere tone. I wish it came together a bit better by the end, but the film still inspires plenty of anxious feelings the proper ways for a forest-set freak-out.

In The Earth will be available in theaters starting April 16, 2021. 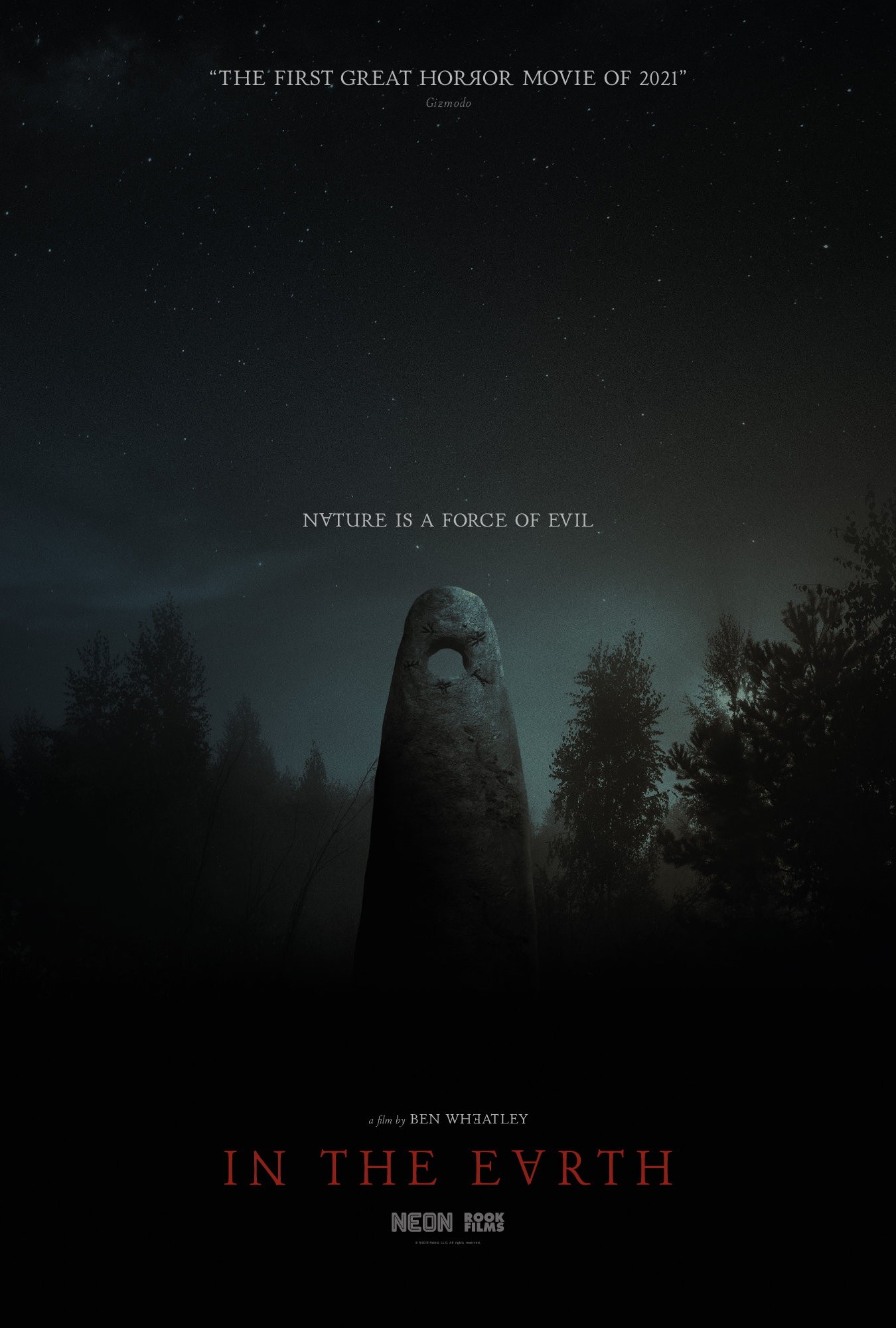 ‘In The Earth’ Review: Panic In The Woods

As the world searches for a cure to a disastrous virus, a scientist and park scout venture deep in the forest for a routine equipment run. Through the night, their journey becomes a terrifying voyage through the heart of darkness, the forest coming to life around them.
0
Average User Rating
0 votes
Please sign in to rate.
Film:In The Earth
Cast:Ellora Torchia, Hayley Squires, Joel Fry, Reece Shearsmith
Director(s):Ben Wheatley
Writer(s):Ben Wheatley
Genre:Horror
Studio(s):Neon
MPAA Rating:R 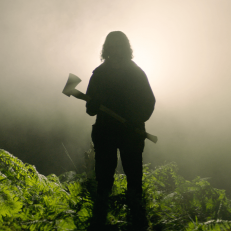 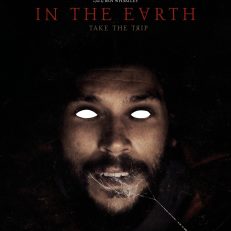 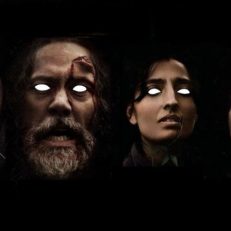 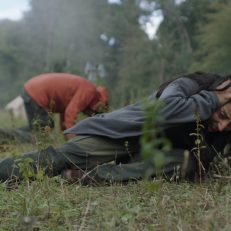 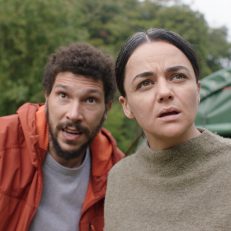 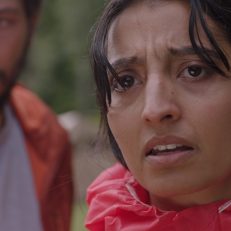 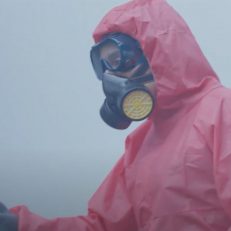 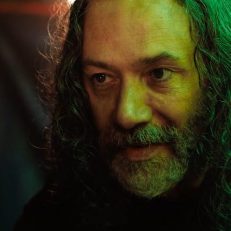