As we move forward in time, the inevitability of seeing the lives of famous stars adapted into features remains a daunting task. Granted, the life of Elvis Presley, the King of Rock & Roll, has already been adapted a few times, but making a big-budget studio film to serve as the definitive cinematic reference point is still quite the challenge. With that in mind, director Baz Luhrmann seems all too fitting a choice as far as taking the over-the-top personalities and productions involved and delivering a biopic that doubles as a rock opera. Elvis may not be breaking too much new ground, but between the fun of the singer’s early days and the growth of his character in the later stages of his short life, not even Colonel Tom Parker can stand in the way of what works best about this film.

Never shying away from unconventional approaches, the Colonel factors in pretty heavily, providing the film with its framing device. Tom Hanks plays the shady manager with whom Elvis (Austin Butler) had a complex relationship, and this performance may make or break how one feels about the film. Fitted with prosthetics, heavy padding, and what passes for a Dutch accent, from the way I see it – if one is making a movie about the King of Rock & Roll, a larger-than-life persona, with all the costumes, gold-plated accessories, cars, homes, planes, and more to back that up, one doesn’t suddenly tone down the man who lived life as big as Elvis did.

As far as this Elvis story goes, the film plays pretty linearly. While the audience is given an idea of where things are heading, this is still a movie following the beats of a biopic. A young Elvis discovers blues and R&B music from the Black people he lived near in Memphis. His love for that music leads to Elvis finding popularity at an early age by appropriating the style in his own way. He’s picked up by the mainstream (white) audiences because he’s taken a sound people like hearing while providing a visual of a person they are… comfortable with. The Colonel comes across Elvis, sees how the audience is reacting, and his eyes fill with dollar signs. 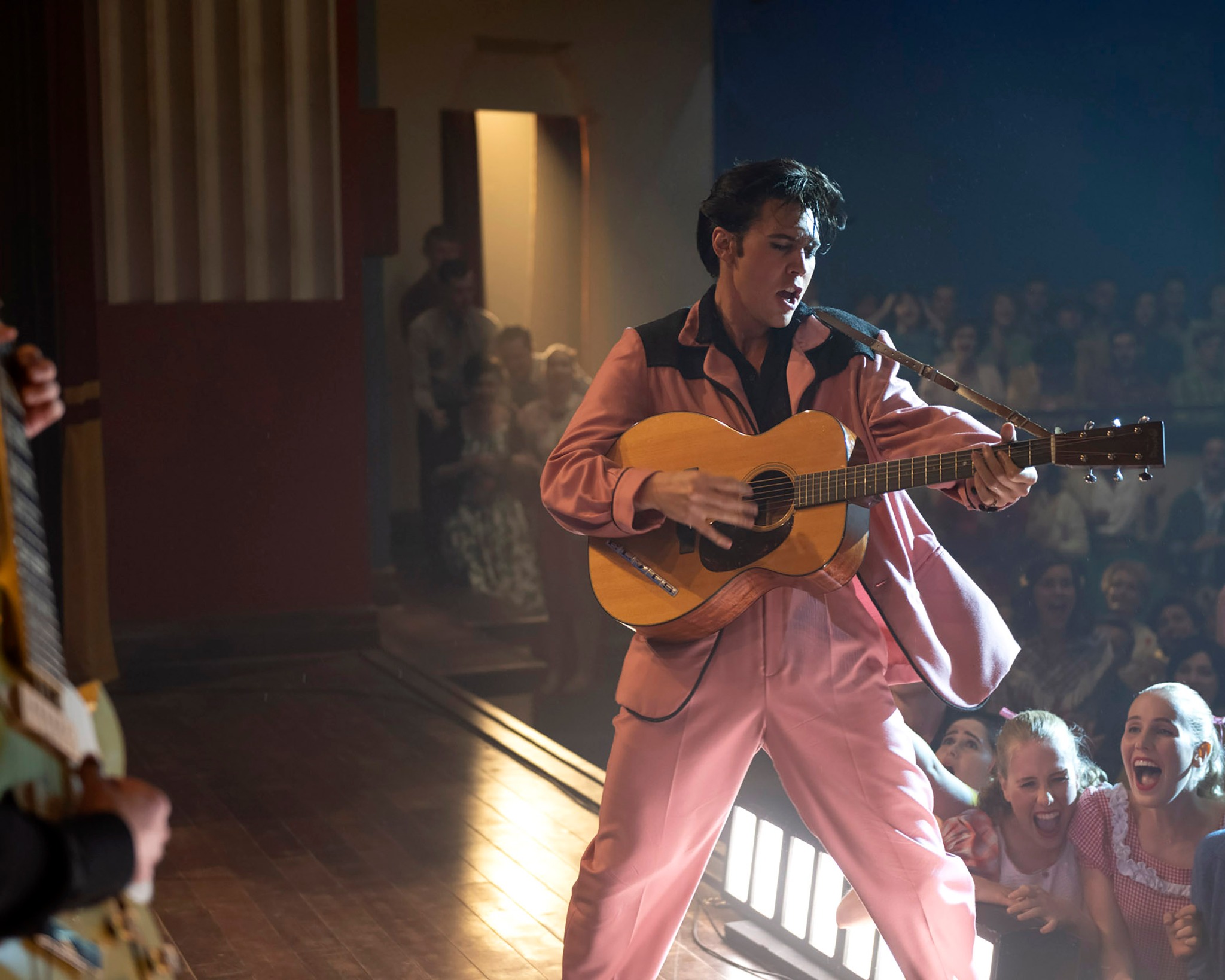 For the first half of the film, Luhrmann gives in entirely to the fun to be had from seeing a young Elvis play the hits, grab the attention of everyone, and be the shining star he was. Luhrmann is not a subtle filmmaker; this is very much a film oozing with style and blunt messaging. The camera is all over the place to present all the glitz and glamor Elvis experiences. When scenes focus on the concerts and Elvis’ gyrating body, there’s no shortage of angles and intensified editing to capture the energy of those moments. As a counter, the attempts by “the man” to hold the singer and his “problematic” stage presence back (because it reminds them too much of Black people), the music gets darker, the filmmaking is more disciplined, and the audience knows who the villain is.

It all works as it needs to, especially when understanding how this film functions as a rock opera. In saying that, I wondered if there was much more to this film besides the energy the filmmaking brought. In this first half, no one is particularly bad (give or take how people feel about Hanks), but I did start questioning if I was right to feel a level of emptiness, despite the fun of seeing Elvis and B.B. King (Kelvin Harrison Jr.) hang out at a club, watching Little Richard (Alton Mason) perform. Sure, they approximate the voice of these people well, but was there more to it?

This is why I was relieved by how the film evolves in its second half. The arc is generally the same when it comes to the biopics of music stars in particular. Their rise in popularity leads to drama, whether from issues revolving around creativity, substance abuse, relationship problems, or all of the above. Not being a documentary, Elvis presents the man fairly innocently for the most part (trickier areas such as his affairs are basically glossed over). Instead, Luhrmann chooses to focus on the strife between the Colonel’s money-focused demands of the young singer and Elvis’ desire to grow as a musician, and have a voice when it comes to addressing the state of society at the time. 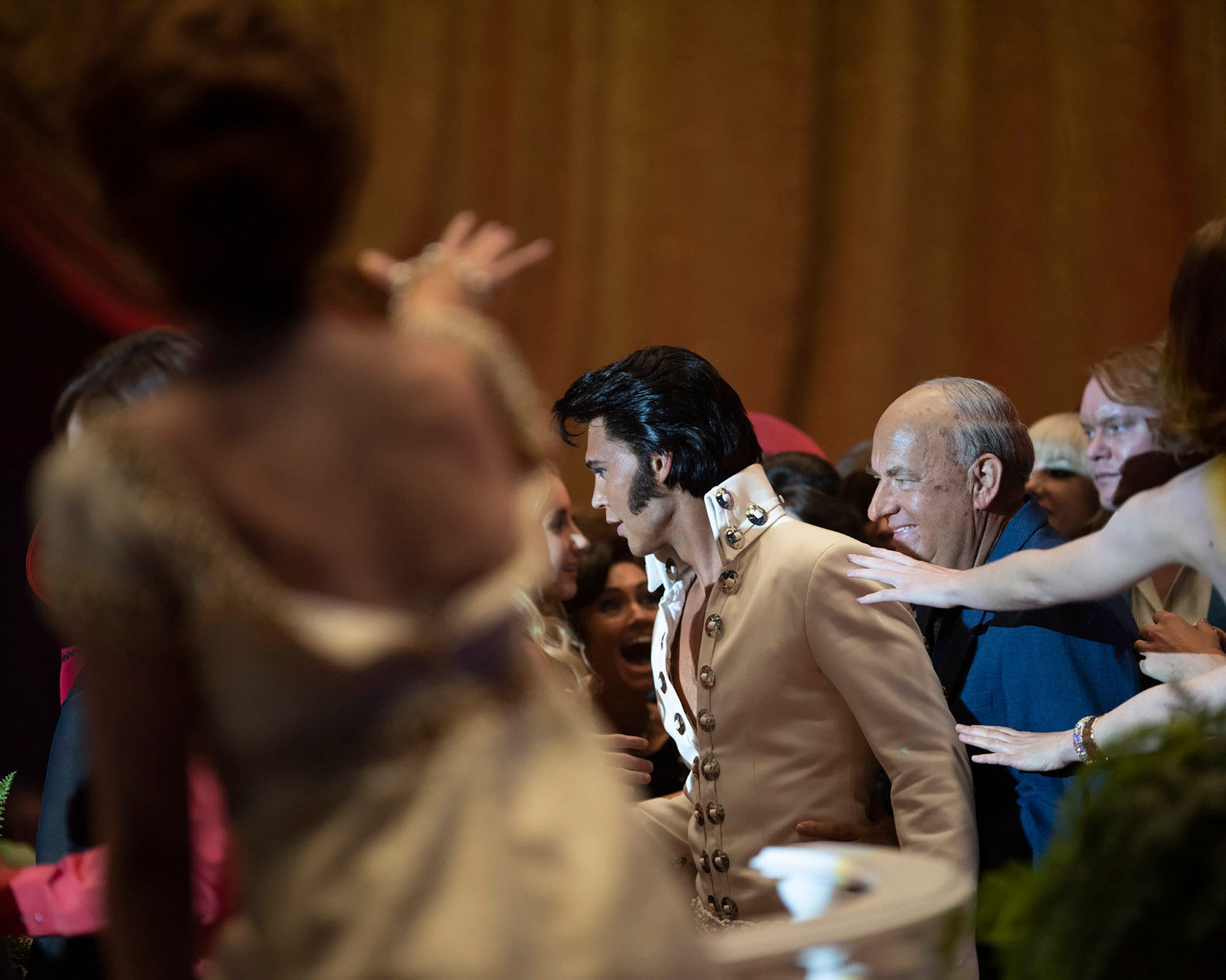 While there is a slower pace that comes with this portion of the film, I appreciated the choice to let Butler become a more reflective version of his subject. While he was already doing an excellent job capturing the voice and swagger of Elvis, it’s seeing him take on this more concerned side of Elvis that allowed me to appreciate Butler’s choices as an actor. This isn’t an easy task, particularly from a real-life star with so much charisma. Not unlike Chadwick Boseman’s portrayal of James Brown in the slightly better and underappreciated Get On Up, trying to approximate one of the greatest to ever do it doesn’t just happen. In that regard, Butler’s star should most certainly be on the rise following the release of this movie.

Beyond understanding this film’s character and narrative arrangement, all the things one would want from an Elvis Presley biopic are here. The costumes and production design truly deliver, which was never in doubt when considering Luhrmann’s filmography, which includes Moulin Rouge! and The Great Gatsby. Similarly, the soundtrack goes the distance as far as finding a unique way to present the music of Elvis.

Sure, we hear plenty of familiar tracks, and the film works to make them as exciting as they were to hear in the 50s, 60s, and 70s. With that said, Luhrmann’s modern sensibilities led to the addition of artists such as Jack White, Eminem, CeeLo Green, Doja Cat, Stevie Nicks, Diplo, and others appearing on the soundtrack. It works thanks to how Luhrmann can deploy these choices, let alone mix up the format when it comes to the standard biopic format. 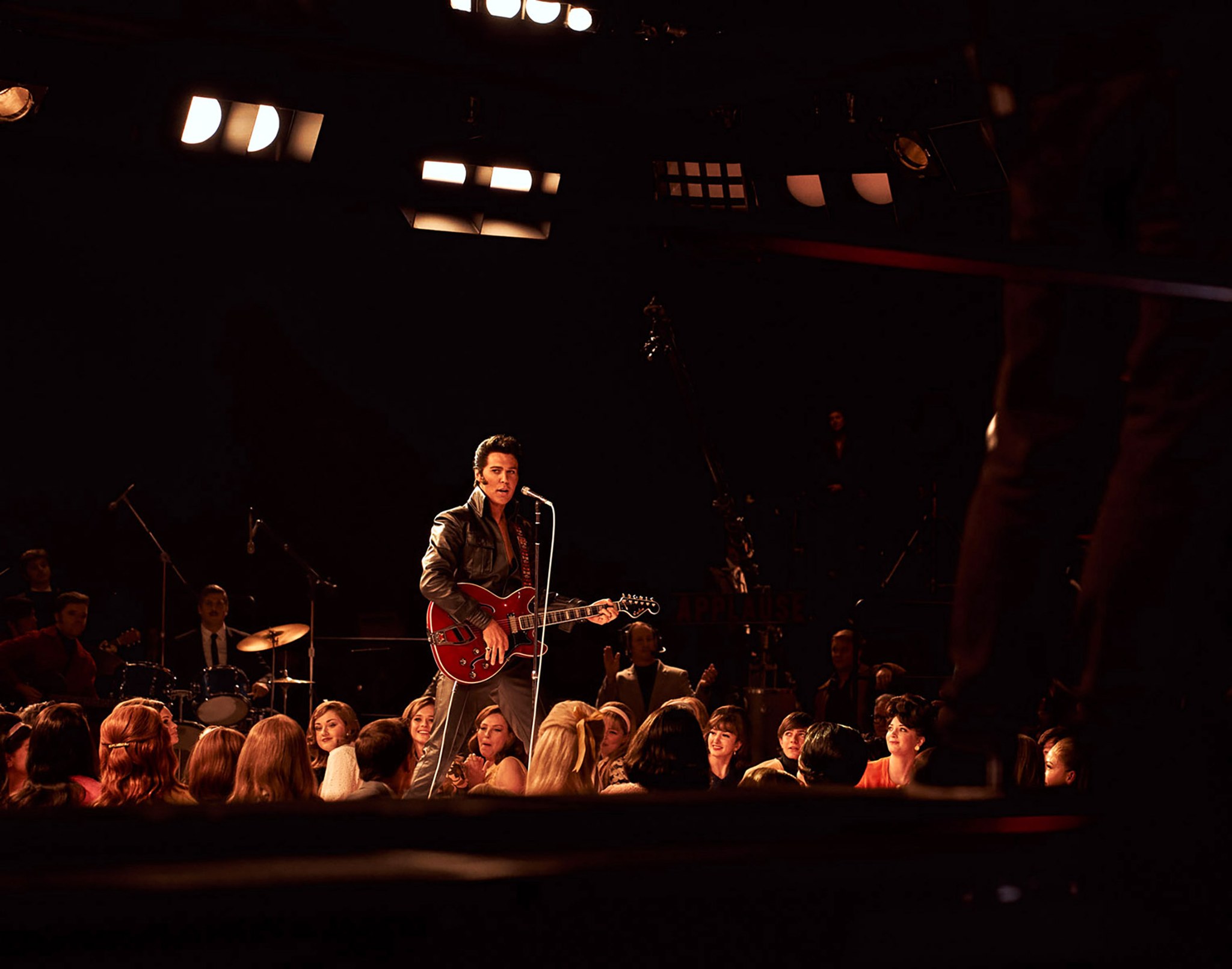 Being a movie about Elvis, the figure towers over pretty much everyone else, aside from Hanks’ Colonel. With that in mind, there are only so many cast members to consider, as it’s not a movie designed to cater to any other supporting performances. Olivia DeJonge comes closest to being more than just a subject in Elvis’ life, as her work as Priscilla Presley is meaningful, and the film finds time to give her things of importance to say. Still, this is a film all about what Butler and Hanks are putting on the table, and even while it clocks in at over two and a half hours, the focus is fitting.

Is there more this film could have delved into? Sure. I was hoping to see Elvis grapple with how he felt about profiting off of music inspired by a race of people not deemed equal, but the way Luhrmann counters this with his why Elvis was deemed controversial to the conservatives in charge makes sense. Moving to later in his life, I could only have dreamed of getting more looks at his experience as an actor. Who wouldn’t want to see scenes of Elvis filming Jailhouse Rock, King Creole, or Clambake?!

On the other hand, speeding past certain significant moments led to extended scenes focusing on Elvis’ process of creating new music later in his life. Music biopics tend to be at their best when giving the artists a chance to show off their process. Watching Elvis experience creative freedom and find ways to experiment and be true to himself is a treat. It’s the sort of thing that makes one feel for the man, given how he’s been manipulated by the Colonel, let alone knowing Presley only had so many years left.

Working as more than just a jukebox musical or a pure hagiography, Elvis does well in what it chooses to lean on. Any biopic attempting to stuff a person’s entire life into one feature film will run into problems (unless you’re Malcolm X). Still, Austin Butler proves to have been up to the challenge of playing the various stages of Elvis and not getting lost in all of the elaborate cinema Baz Luhrmann throws into this wild production. Some may end up feeling all shook up by what Hanks is doing here, but I’d be happy to have a little less conversation about him and more focus on how enjoyable and good-spirited this film is. Perhaps there was more complexity this film could have aimed for, but I could feel Luhrmann’s burning love for wanting to deliver a proper tribute. 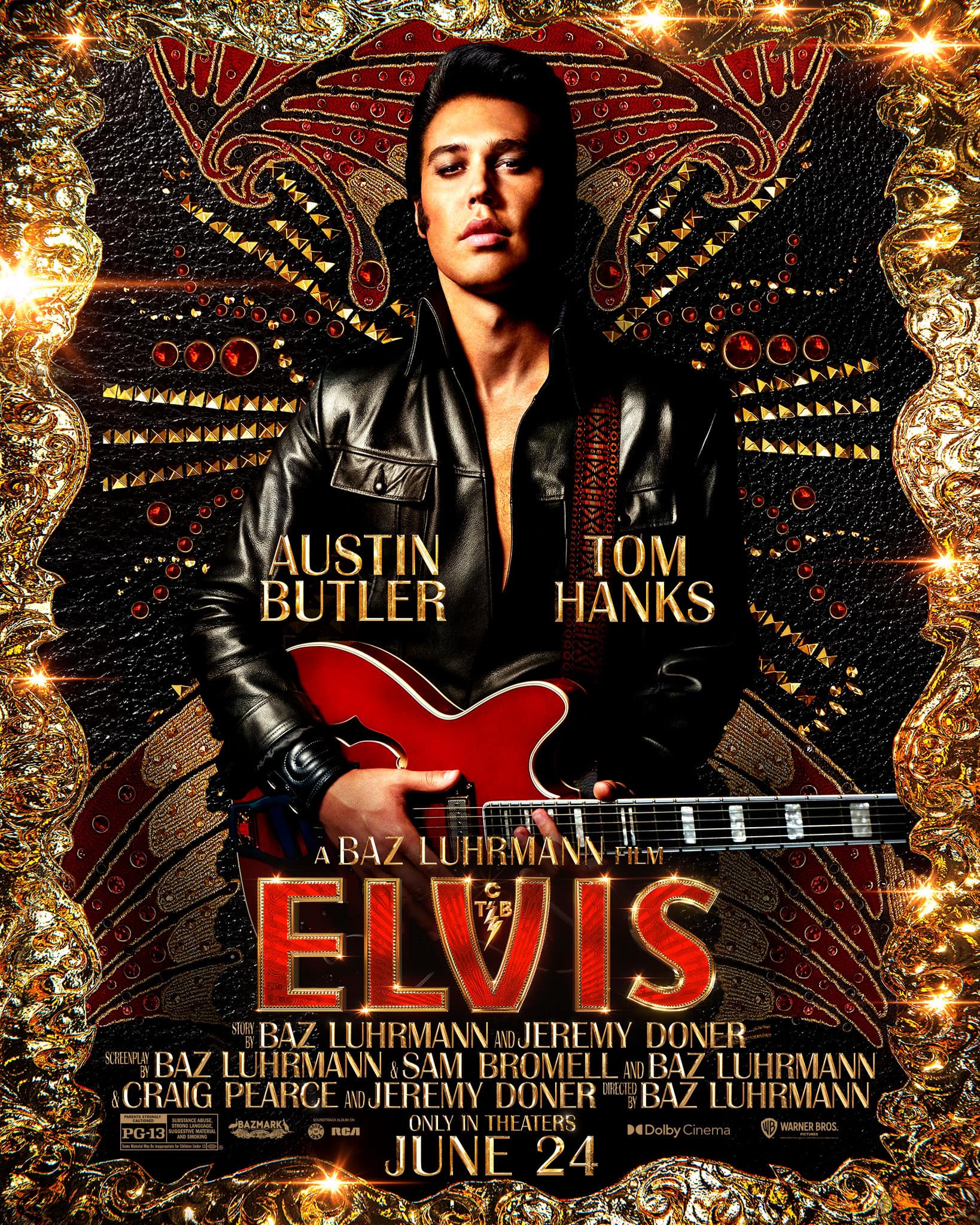 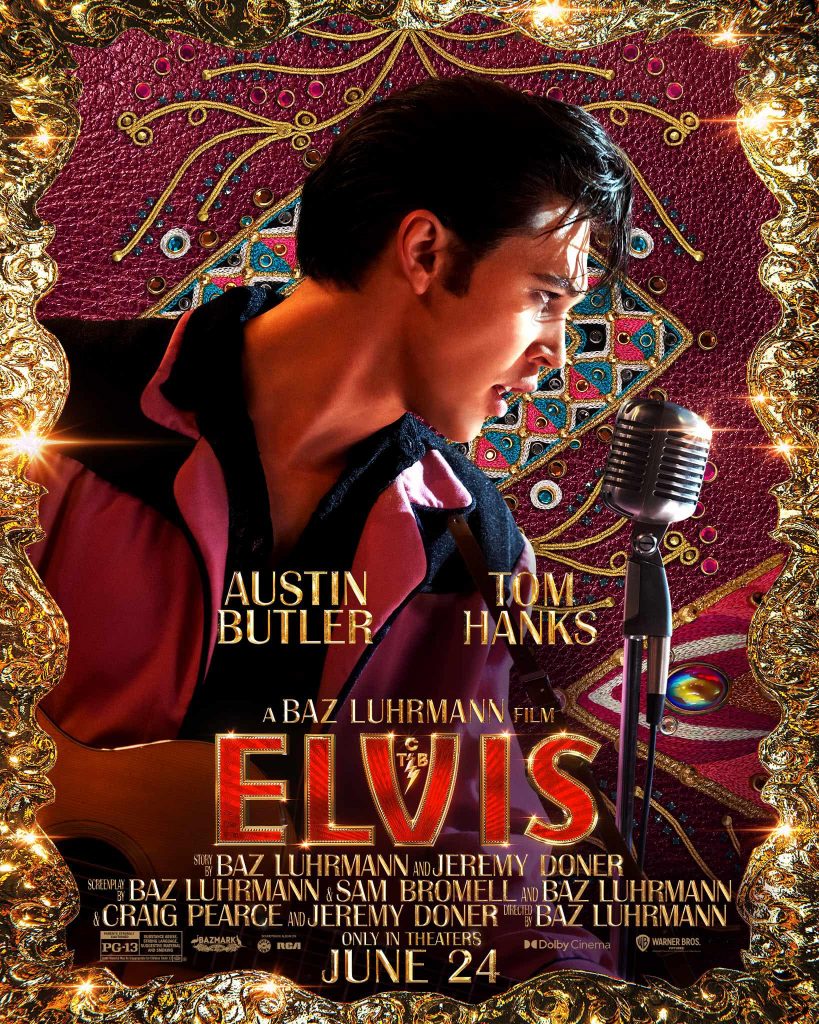 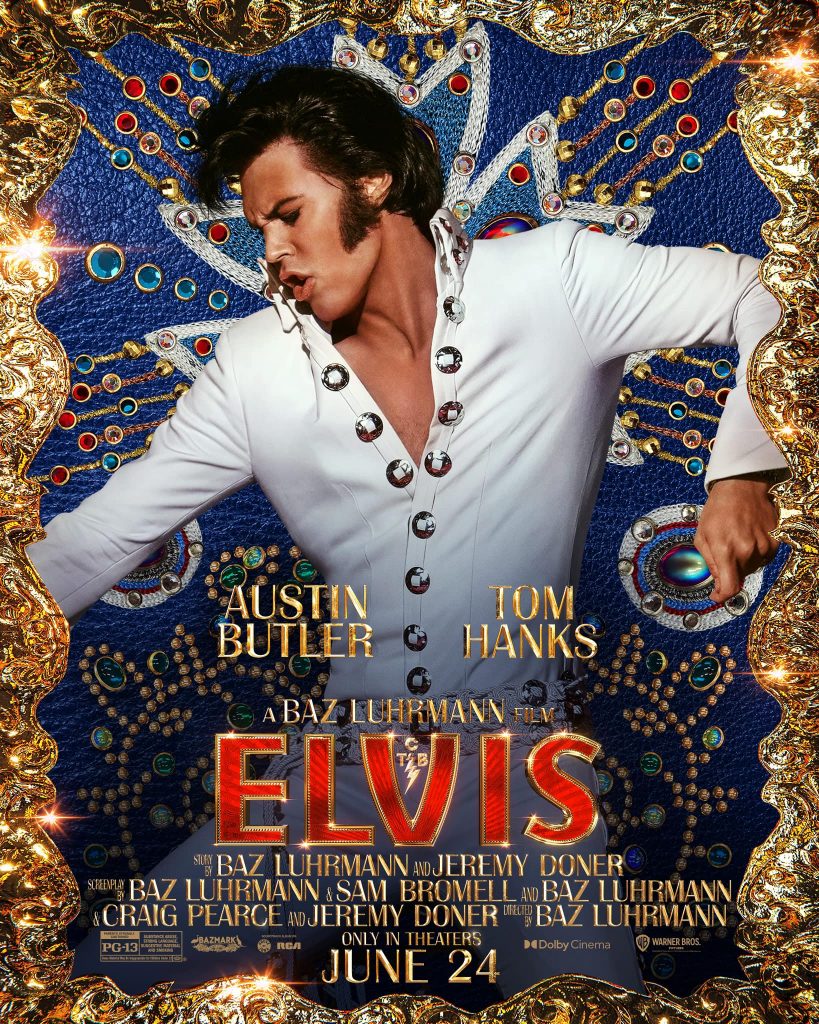 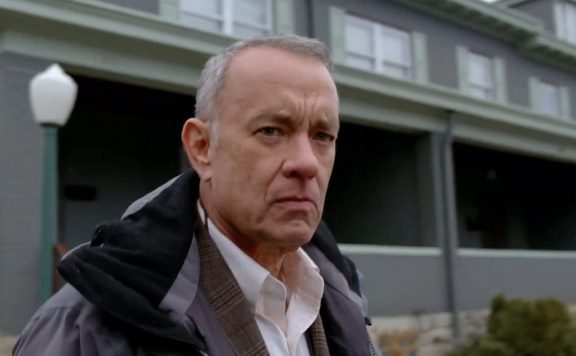 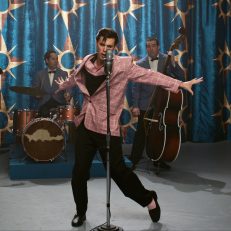 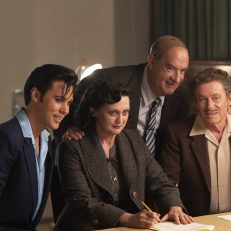 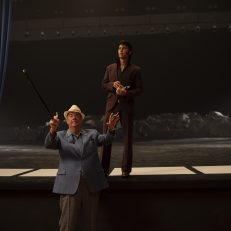 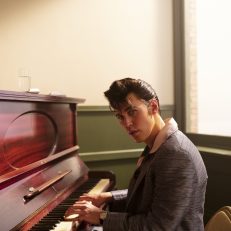 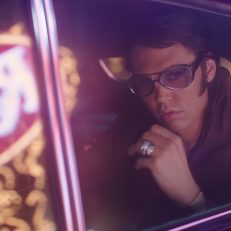 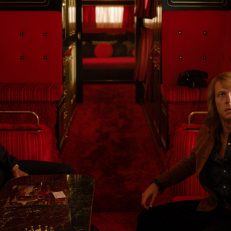 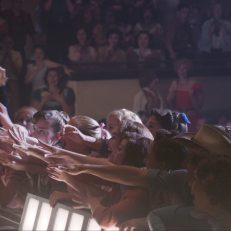 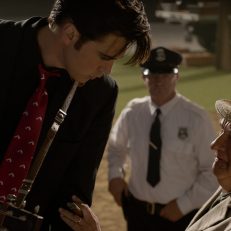