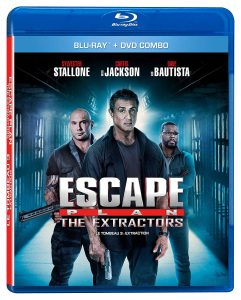 When I thought Escape Plan could be another franchise for Stallone, I was thinking a standalone movie each time. Ray Breslin (Stallone) would have to break out of a new prison each time. I never even imagined continuing the threads of the first movie, but that’s what Escape Plan: The Extractors does.

The Zhang company who built Hades is back, and I appreciate the reference, although I’d love to see the prison they’re commissioned to build beneath the desert. That would probably require a bigger budget sequel. Wu Zhang (Russell Wong) needs Breslin now to rescue his daughter Daya (Melise) from Lester Clark, Jr. (Devon Sawa). In case you don’t remember Vincent D’Onofrio played Lester Clark, which even I didn’t, they have clips to remind you what Lester Jr. is so angry.

Ray leads the charge a lot more than in Escape Plan 2, where he turned the escaping over to the younger generation until he came in for the third act. That was a fine approach for a DTV sequel too, but Stallone is really in Escape Plan 3 full time.

There are a lot of dark tunnels and underground corridors, but it does the job of seeing Stallone break in for the rescue. Some graphic Stallone kills are clear in frame, R-rated in a way maybe theatrical movies won’t even be anymore. The showdown has a lot of edge and personal beef, considering Sawa is totally outmatched.

The ensemble kicks ass too. Harry Shum, Jr. does good martial arts and we’ve seen Max Zheng do them before. Dave Bautista has high tech artillery and a hand to hand with a wresting move. Barry fans will get to see Daniel Bernhardt in all his glory again.

To get an ‘80s Stallone movie in 2019 should be celebrated. At least a ‘90s era The Specialist/Assassins level entry is worthwhile. And it’s really only 78 minutes long. There are nine minutes credits, but there’s no fluff either.

Director John Herzfeld and Devon Sawa do a commentary together. Stallone and Bernhardt join for select scenes, but Herzfeld and Sawa treat it like a legit commentary for any studio movie. There is of course praising each other and the people on screen, but they tell you how the movie got made and it was a real production even though it was made for home video.