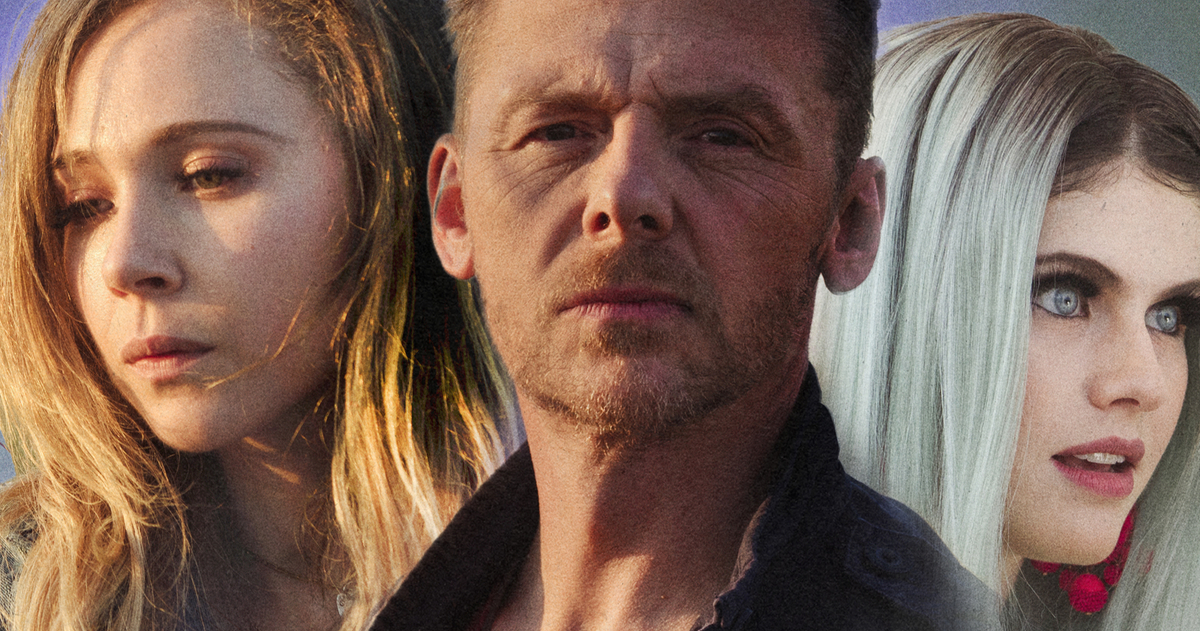 When a movie features the impressive talents of Simon Pegg, Juno Temple, and Alexandra Daddario, you know there’s something special there. In the new film LOST TRANSMISSIONS – which is currently available on iTunes – the three actors give terrific performances that are moving and especially powerful. While this story of a fading music producer dealing with schizophrenia could have easily been heavy handed, writer/director Katharine O’Brien has given us a compelling and thought provoking tale of redemption and understanding.

One character in the film that isn’t terribly empathetic is Dana Lee. Played by the lovely and talented Daddario, the role feels incredibly real in a world where young  people who discover fame early in their lives forget about struggle. It’s a terrific performance, and far different from anything that she has ever taken on before. While she is only in the film for a brief few moments, she certainly makes an impression as a less than understanding pop sensation who thinks the world revolves around her.

Thankfully, Ms. Daddario is a phenomenal talent, and she is as far from this character as you can get. We recently had the opportunity to chat with this multifaceted and especially kind talent, and she opened up about why she wanted to be a part of this project, as well as how she’s approaching the work she takes on now. Coming from films like the PERCY JACKSON series, to comedies like BAYWATCH, to working on the critically acclaimed first season of True Detective, she continues to challenge herself and look for new and exciting opportunities. And while she isn’t a very big part of LOST TRANSMISSIONS, she is certainly terrific. I highly recommend you seek this one out on iTunes, it’s really a beautiful feature.

What was the inspiration behind Dana Lee and kind of creating this character?

Well, I love doing characters. Like at the end of the day, that’s what I’ve always done from a young age. I think it’s really fun. It was just an opportunity to be somebody totally different than who I was. And every character to a certain degree is that, but this is just so far [from me] and once you mix it, and you know, even putting the real fake nails on – I put like real acrylics – but even that, you just feel like a different person with the hair and the whole thing. And it’s just really fun. So it was more of an instinctual thing to make her that way. I just had a good time with it.

Oh, totally entitled. If I were diving into a whole film about this character, there’s a lot, you know. Sometimes I think people who get very wealthy or famous at a young age, you don’t even really know what it is you’re doing. So the obnoxious part of her is that… I think that there are levels of kindness or thinking that she’s a good person, but she’s definitely just totally entitled. And if somebody does something she doesn’t like, they’re not doing their job. And there’s not a lot of compassion or empathy there.

I feel like this is a really relevant film in a lot of ways. Well, in many ways because I think mental illness is something that we’re still not even close to really truly understanding. Was that an appeal for you to kind of take on this project?

I loved the project. I wanted to be part of it in any way. I loved the project just because, yeah, I do think that mental illness – illness in general, and God knows the state of the world – requires a lot of empathy right now. But it requires a tremendous amount of empathy. And I have people in my family who have mental illness, and I know a lot of people struggle with all kinds of things and it does require a level of patience and understanding, and it can be very frustrating. And in this case and this film, [Simon Pegg’s character] is not mean, but I think it’s just, it becomes frustrating for people. People don’t know what to do. People get frustrated and angry and give up. And I think it’s just that you have to have empathy and compassion and patience and, and I think it also shows us the kinds of things that needs to be put into place in our society, and the help that we need from the government, and resources in order to help people who have mental illness. People who have mental illness are people too, and they can end up being okay. It’s just a matter of finding the right support system and not giving up. So it, it’s a film filled with compassion and I’m the one character who has no compassion.

That’s got to be kind of fun to play though. You get to go places where no one else gets to go.

Yeah. I mean, my character’s is in her own world. It’s a whole different thing. She doesn’t know what’s going, you know, and it’s really, really fun.

You and Juno Temple work so well together. There’s a really interesting chemistry between you two. What was it like working with her and kind of playing the pop star and having fun with that? It felt quite genuine.

I mean, Juno was incredible. You know, she’s been acting for forever. She’s an incredible actress and a lovely human being. She just works polar opposite [from me]. [As far as the characters] I come in with all of that energy and she’s in a completely different place, I have no idea what she’s going through or what’s going on in her life. I never asked. I don’t care. You know, I just go in and I want what I want and Juno played that so beautifully. Just sort of like, I just played off of her energy and her just being in a different place. But my character doesn’t know that. She doesn’t care if she’s going through anything. She just wants what she wants. So that’s the dynamic. And that, in a way, is fun to play and just shut off any kind of empathy or any kind of interest on why the other person is acting that way. That’s where that’s Dana Lee is coming from.

What did Katharine O’Brien add to this story, and why do you think she was a voice to tell it?

That’s a very good question and I’m not actually sure that I’m the best to answer it. I didn’t work enough with her so I didn’t really get to know her easily. I will say that the experience I did have with her, and sitting down to meet with her, and why I wanted to do the film in the first place was she had a very good energy. And I said this before, I really am interested in working with more female directors in general and supporting them. So there’s that, but that’s not in and of itself. She had a lovely energy, very clear vision. You could tell she really wanted to tell this story and I really trusted her innately. But again, I didn’t dive enough into it, I wasn’t deep enough in the project or in working with her in depth to really answer that question. I think that there’s a deeper answer that Juno could give more than I could.

It must be kind of strange to go and talk about that film knowing you’re quite a small part of it. But honestly, you do make an impression and this cast is just incredible. I think this may be one of Simon’s best performance ever.

I mean, he’s incredible. I only met him once on set. He’s an incredible actor. I’m just honored to be any part. It’s like a small part of this but I had a really good feeling about it. I was really excited to be part of it in any way. And they did their thing and they made an incredible movie. I’m grateful to have been the least compassionate part of it. You know, it’s a different side of what the film is.

I want to work on projects. I’ve had a lot because I’ve had a lot of experiences, I’ve tried a lot of things and I’ve made mistakes. And I am essentially looking now to work with very specific directors, directors that I really trust. I’d love to work with more female directors, but you know, the industry is changing a great deal. The way we make movies is different. You know, TV or what we call TV, which isn’t even… I think there’s so many different incarnations of that, that it’s about finding really strong directors and producers to work with. And being in the situation where you trust the people around you and you really believe in the project that you’re part of. And you always try to go into these projects like that, but sometimes I think that’s part of being in your twenties. It was more of a gambling mentality of, oh, this will be fun, this will be cool. That’s the positive. And I think now I’m more looking for a full package of what really makes sense for my life, what really makes sense for my heart. That’s also because I’m in my thirties now, so I have less of a sort of like, oh, this will be fun, this will be different, this would be strange. Now it’s very specific, wanting to work on something that feels more, close to my heart, I guess.

That’s a good answer. What do you have coming up that you’re excited about that you really want to get out there into the world?

There’s a movie coming out in April called WE SUMMON THE DARKNESS with this really cool director, Marc Meyers who I adore. The film is a sort of a horror comedy, but I think we ended up doing what we really wanted to do with it. It really works. The cast is really incredible. I’m excited for people to see that. And I’m in a movie with Diego Boneta who’s incredible, called DIE IN A GUNFIGHT. That was a script that was around for forever that they were trying to get off the ground and everyone in Hollywood has been attached to this script. I mean, not literally, but it’s been one of these things that they’ve been trying to get off the ground for I think seven years. So we finally got it made and I’m really excited for people to see that as well.

LOST TRANSMISSIONS is now available on iTunes and other On Demand services.

Exclusive Interview: Alexandra Daddario on Lost Transmissions When a movie features the impressive talents of Simon Pegg, Juno Temple, and Alexandra Daddario, you know there’s something special there. In the new film LOST TRANSMISSIONS -...
0
Average User Rating
0 votes
Please sign in to rate.