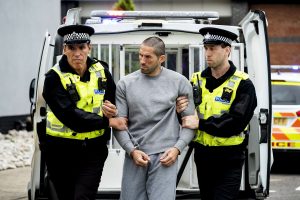 I discovered Scott Adkins when Vern reviewed Undisputed III, Ninja and The Tournament. I got my first chance to interview Adkins for Expendables 2 and we’ve been talking regularly ever since. So I definitely wasn’t going to miss him for Avengement, and Adkins was happy to hear me on the other line.

“Hallooo Fred,” Adkins said. “You’ve been with me since the beginning, mate. I do enjoy talking to you. I really appreciate your support, mate, going back many years. Thanks a lot.”

In Avengement, Adkins plays Cain Burgess, who escapes a prison furlough visiting his mother in the hospital and goes after the thugs who sent him up in a local bar. As Cain tells them the story of his hard time, we learn how he got all the scars and metal teeth he’s sporting.

So we spoke about his latest movie, upcoming films and when I brought up Marvel he had some good natured regrets about playing a villain in Doctor Strange. Avengement is out Friday, May 24.

WLE: You’re a very handsome guy. Did you enjoy roughing up your face in Avengement?

Scott Adkins: I do, you know. Sometimes, when you’re meant to be the good looking hero, you come to work and you’re not looking your best that day, you’re like, “Ah, I’m not looking good today.” When you’re playing a guy like Cain Burgess, it doesn’t matter so it’s freeing. You don’t have to worry about those silly things. Just get those scars on, pop the teeth in and off you go, no problem.

WLE: Was it any challenge to do the fight scenes wearing the makeup?

Scott Adkins: My teeth flew out on one. Actually, it’s in the movie if anyone can spot it. I get punched and my teeth fly out. It looks like spit but it’s actually my teeth. Aside from that, it was just sitting in the makeup chair that was the real hardship.

WLE: Is the cockney accent natural and easy for you? 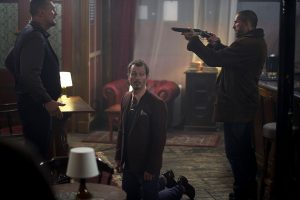 Scott Adkins: I had to do it for Green Street 3 back in 2012 and I never lost it. So yeah, I’ve got it on tap now. I’m good with any of the English accents to be honest. I’ve got a good ear for accents, anywhere in the U.K.

WLE: Has it been a good collaboration with Jesse V. Johnson that he lets you play characters with more dialogue?

Scott Adkins: Well, here’s the thing. Look at Savage Dog. There’s not a lot of dialogue for that character. Then I wanted to do Accident Man and brought Jesse on as director in a script that I’d written with Stu Small. I remember Jesse saying to me, “Scott, there’s a lot of dialogue in this. Are you sure you can pull it off?” I said, “Well, I wrote it Jesse, so yes, I think I can.” Obviously it worked and we followed it up with Debt Collector, Triple Threat and my lines were written by Stu Small. Stu Small wrote my dialgoue in Triple Threat and he wrote The Debt Collector with Jesse and he wrote this. So it’s really Stu’s words come out of my mouth very well. I love speaking Stu’s dialogue.

WLE: Was any of Avengement a world you were familiar with in England? 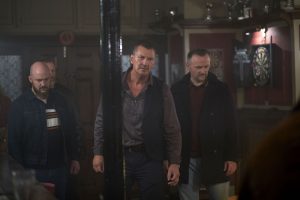 Scott Adkins: I’m not from a crime family or anything but you’re aware of that culture in a way. There are so many British films about that. We’ve even got something like Eastenders which is a longstanding show. I understand the vibe of that place and then you’ve got somebody like Craig Fairbrass who’s in the movie with us who really is legitimately from that kind of world. It’s great to have somebody like him there to bring that authenticity. We needed someone that, as soon as he walked in the room, you were instantly intimidated by him. Craig pulls it off so easily because he’s a tough guy in real life.

WLE: Did you want the action in Avengement to have a harder edge?

Scott Adkins: Absolutely, yeah. Didn’t want it to be a martial arts film. Wanted it to be the film it is, a revenge thriller, but I wanted to give the fist fights a very visceral, hard hitting edge and definitely put in some wrenching moments which are in there, some violent moments and also some absurd, laughable moments because I’m a big fan of Monty Python. Sometimes I just like to get absurd with things.

WLE: I know every film is a struggle to get made, but has this been a lucrative few years for you?

Scott Adkins: Well, I must mention Bleiberg Entertainment who have been a great supporter of me and Jesse. They let us put these films together and write them from the ground up and they support them. We don’t have a massive budget or anything but they trust us. They give us space to do what we want to do and long may that continue. We’re going to do something else this year and then there’s another thing we’re probably going to. I must mention Bleiberg Entertainment for helping us.

WLE: Do they want you to do Accident Man 2 and Debt Collector 2?

Scott Adkins: Accident Man is with Sony and we are absolutely working to get Accident Man 2 made, maybe early next year. I don’t have the complete green light yet but Sony were very happy with the performance of the first movie. We’re developing scripts at the minute. It’s getting close. Hopefully we’ll have some good news soon.

WLE: Did you think The Debt Collector was a character who could return when you made the first movie?

Scott Adkins: This is the thing with Debt Collector 2. We’re hoping to do Debt Collector 2. The way the first one ended, if we could do it again, we probably wouldn’t have ended it that way. We think we’ve found a way to continue the story because I had such a great time working with Luis Mandylor. Playing those characters, and those two characters worked so well together, there’s much more mileage in that. We want to get those two back together. We have a story that we can tell, so I would say that’s going to happen very soon.

WLE: I’m excited to see you in Ip Man 4 with Donnie Yen. Are Ip Man 4 and recently Wolf Warrior very different than your early days working in Hong Kong movies?

Scott Adkins: Yeah, I started off in Hong Kong cinema. That’s where I learned my trade really, how to film fights. So I learned from the best in the business but it’s damn hard work. When I went back to do Wolf Warrior, I’d actually forgot how difficult it is out there. It’s heavy duty stuff so that was a reminder when we did Wolf Warrior just about how hard it is. I tell you what, Ip Man 4, I sang for my supper on that one. That was a tough, tough shoot. I have a lot of action to do in that film. Yuen Woo-Ping is a task master but it was a great experience and I learned a lot from Yuen Woo-Ping and Donnie Yen. I’m just very proud to be part of what I consider to be one of the best modern day Kung Fu movies out there.

Scott Adkins: The Intergalactic Adventures of Max Cloud is an action sci-fi comedy. It’s about this girl gets trapped in her video game. It is a video game called The Intergalactic Adventures of Max Cloud and she somehow gets transported into the game as one of the other character. I am Max Cloud, the star of the video game. I actually think I’m really cool but in actual fact, I’m a complete dick. It is a full on comedy with lots of action moments. I had a great time filming it. It’s something very new to me. It’s a full on, very broad comedy. I hope it’s good because I’ve not done a comedy before. It’s very fun trying. They told me I was funny so let’s hope they weren’t lying to me.

WLE: Avengers: Endgame brought back almost everyone. Was there ever talk of having Doctor Strange’s old foe come back?

Scott Adkins: No. No, I wish I hadn’t done it. I wish I’d saved my Marvel card. I’ve used it up but there you go. I went into it with the best of intentions and they didn’t even put me on the God Damn poster, did they? Oh well.

Scott Adkins: I’m not joking. They should’ve given me a bigger part in it. Fred, it’s DC from now on. Now I’m joking.

WLE: Hey, any big movie that wants to cast you, I approve. 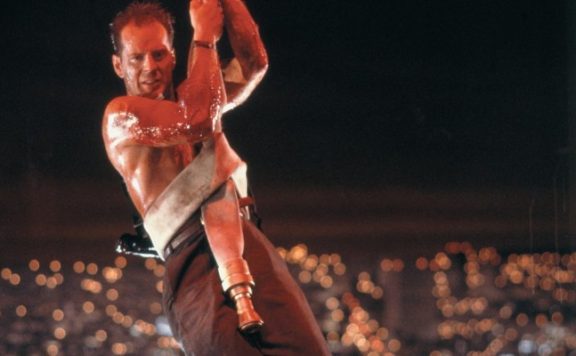 Exclusive Interview: Scott Adkins on Avengement and Why He Regrets Doctor Strange

I discovered Scott Adkins when Vern reviewed Undisputed III, Ninja and The Tournament. I got my first chance to interview Adkins for Expendables 2 and we’ve been talking regularly ever since. So I definitely wasn’t going to miss him for Ave...
0
Average User Rating
0 votes
Please sign in to rate.
Cast:Craig Fairbrass, Kierston Wareing, Scott Adkins
Director(s):Jesse V. Johnson
Writer(s):Jesse V. Johnson, Stu Small
Genre:Action, Crime