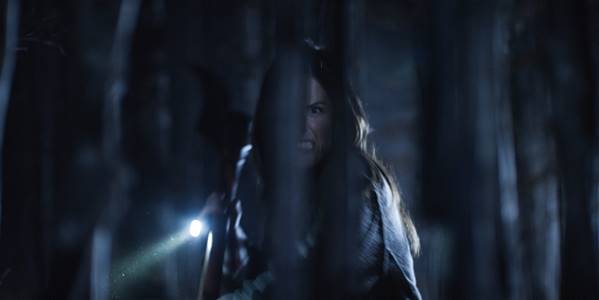 The Toronto International Film Festival is known for showing some of the most interesting feature films of the festival season. What may be overlooked are the short films that also play during the festival. One of the shorts playing this year at TIFF is Latched, from directors Justin Harding and Rob Brunner.
Latched is about Alana, an obsessive choreographer, and newly single mom who takes her toddler on a trip to a cabin so she can focus on her work. While exploring the woods with her child, they discover the corpse of a small animal which her neighbor identifies as a bat. As you can imagine, the corpse is neither bat nor precisely dead.

Latched is a fun and original tale that has all the intensity, character depth, and creepiness of a feature horror film packed into a well-executed 17 min package. Alana and her toddler are played by Harding’s real-life wife and child respectively. This helped in instantly establishing the natural feeling between the pair on screen, for obvious reasons. The cinematography gave this film a big budget feature feel. With the wide drone shots and the lighting during the night scenes, the audience will forget they are watching a short indie horror film. There are also some great makeup effects. Latched has twists that will make your jaw drop, especially near the end. I found myself asking, “Did they really go there?” and they did.

After watching Latched you will see why it was selected for the Toronto International Film Festival. It will make you want to seek out more of Justin Harding’s work and work by Rob Brunner. Latched is featured in the Short Cuts 06 programme at the festival. You can also find the times listed below.