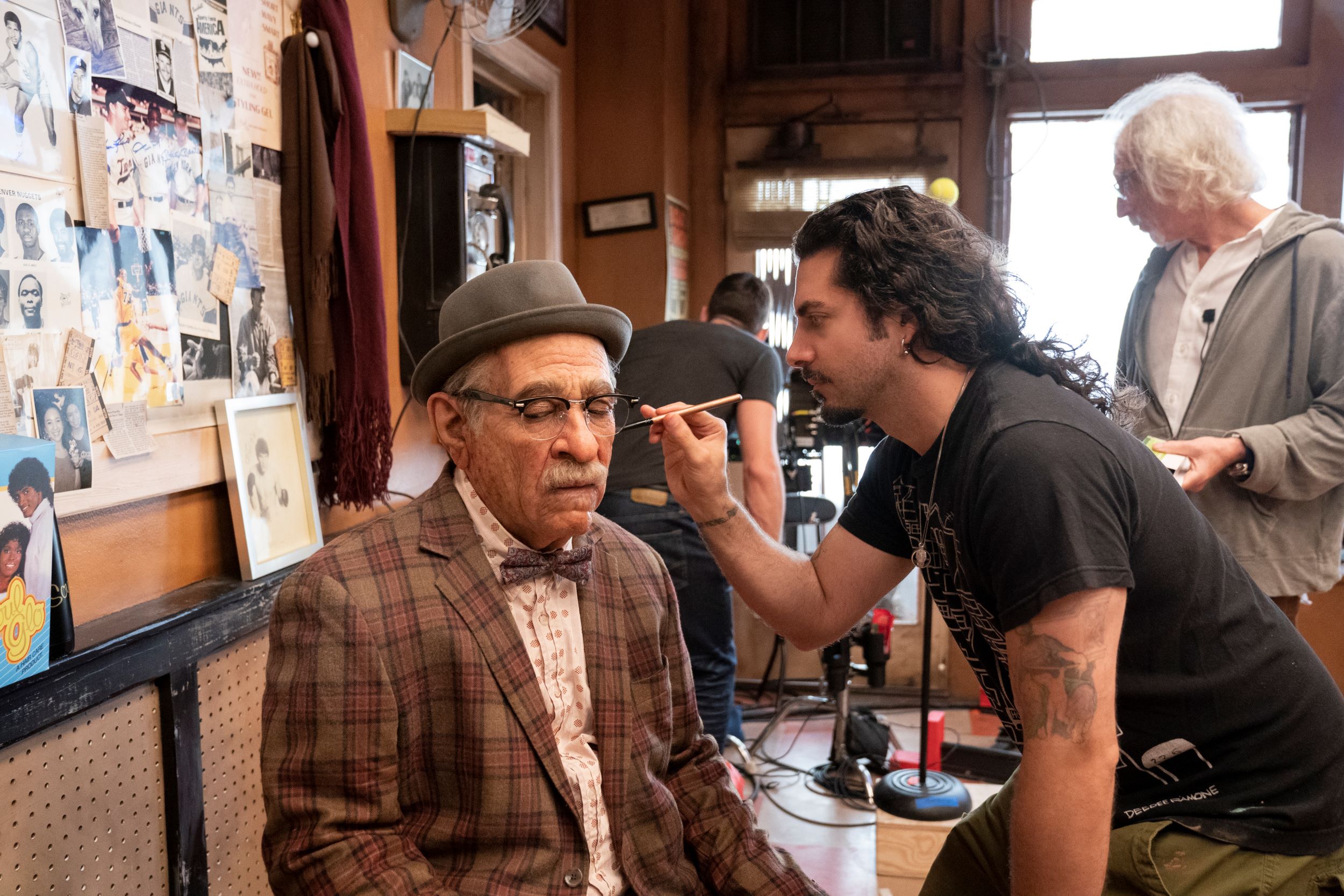 Michael Marino has built a career designing incredible characters for film and television. From zombies to superheroes, his work in prosthetics and other special makeup effects has been seen in projects from Black Swan to Boardwalk Empire and more.

I recently spoke with Michael Marino about his work on Coming 2 America, the long-awaited sequel to the 80s comedy classic. He shared the excitement of working on the project, what it meant to him to bring such iconic characters back to the screen, and the thrill of designing a new character for Zamunda. 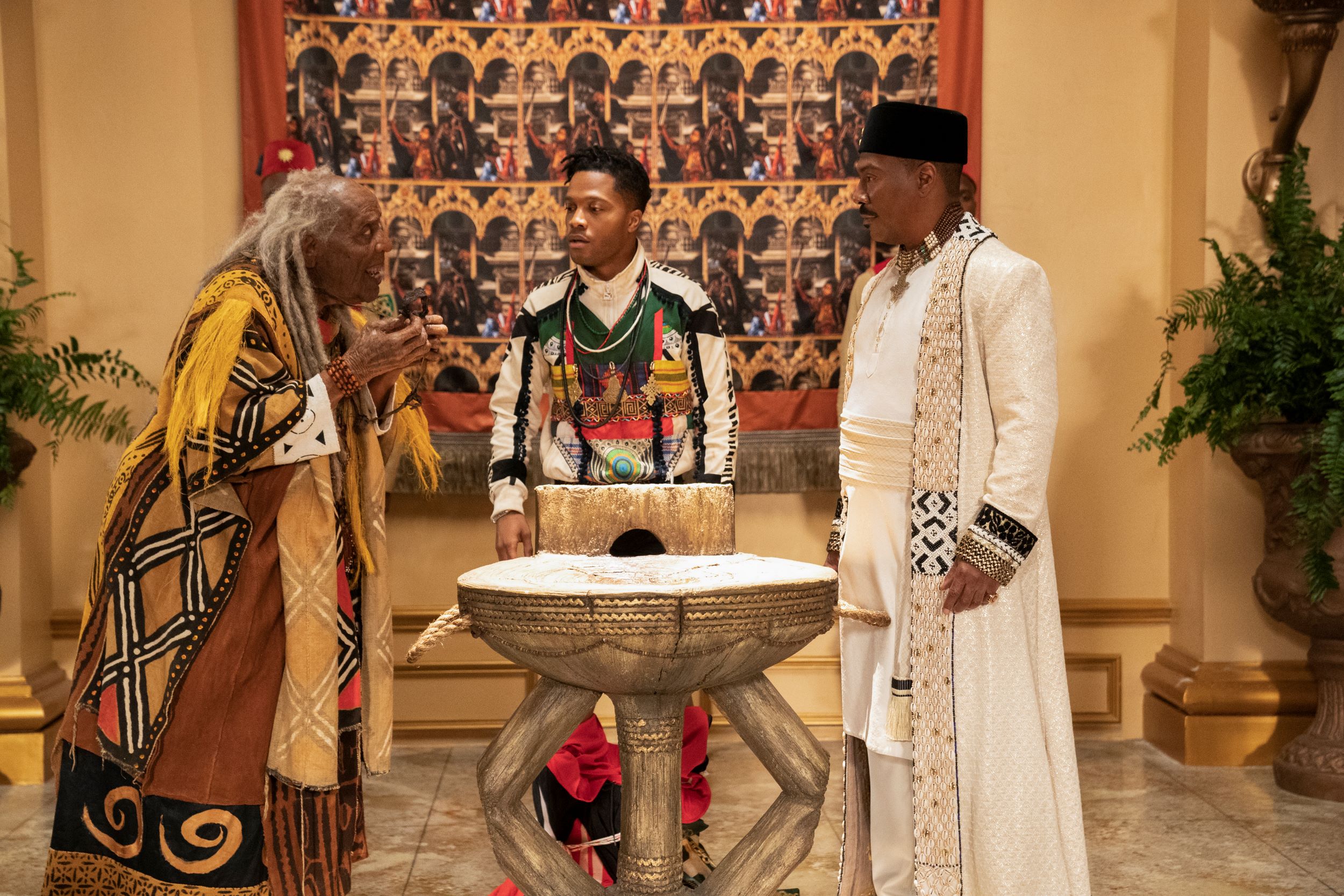 Karen Peterson/We Live Entertainment: How did you come to work on Coming 2 America?

Michael Marino: This was a really highly coveted film that everyone wanted to do. But I think also people shied away from this film. It’s one of the biggest challenges to do because Rick Baker had done the original film, all the makeups, he designed all the original film makeups like the Saul character, and Clarence, the barber and all that. It’s such an iconic film in the makeup effects community that I think people were intimidated. Because, you know, Rick… it’s like duplicating or matching Leonardo da Vinci or something. And that’s who Rick Baker is to us in this community. So it was a challenging film to do and to duplicate just because Rick Baker is really our idol, everyone in the industry’s idol. So it was quite a task, I have to say.

KP: It’s fun when you get to see the guys from the barber shop again 30 years later. Can you talk about how you approached aging those characters up and where you started?

MM: What I think is funny to begin with is that they still exist. They’re, like, 100 plus years old, and they’re still arguing in the barber shop, and they’re still bickering and laughing and all of those things. And it’s still Arsenio Hall. And it’s still Eddie Murphy. And it’s still Clint Smith, the other character and in the background, the other barber, which is Eddie Murphy’s friend from childhood. He’s in the film, too, and, and he’s in some makeups, as well. But it was really challenging because everyone’s older. I mean, 30 years older. Eddie looks amazing still, Arsenio looks amazing still, but they don’t have the 25-year-old faces anymore. They’re different body shapes and different things.

So we took it like any other film. We start from scratch, we live cast each person, we had duplicated every wrinkle and line that Rick Baker had established from the original film because we didn’t want to veer off, make a new person entirely. We followed how maybe those character makeups would age. Their whiter hair and they’re a little heavier, and a little saggier and little balder and all that. We kept that in mind with all of the characters and then we sculpted original makeups based on the original film.

Eddie in the makeup chair and Arsenio in the makeup chair, they just immediately come back to life. The voices come out, the teeth go in and they just are them again, which was such an interesting thing. Because that was one of the films that made me do this career. Get involved in this career. I was so obsessed with that film, how good those makeups were that Rick Baker did, who I idolized. And doing the film really was a dream come true.

KP: How did you how much information was there about the process from the first film? How much research were you able to do?

MM: I did as much research as possible. We studied the film, we found some old photographs Rick Baker’s process. So we really tried to blow up all these pictures and study the movie on huge TVs and just tried to figure out what’s going on. How the makeups were built and done. One of the interesting things is Eddie Murphy, in the original film his hair was bigger, and in this film, Eddie’s bald. Those things, those shapes inspired how the makeup turned out in the original film. So since he’s now got a shaved head, we had to sculpt our pieces bigger to kind of match that there is hair under there. And so the forehead is wider up here, because it actually created a character shape that Rick Baker knew to do. It was interesting, and we matched those things. It was really important to study them and that was a vital part of this research and this journey.

KP: And you got to design a completely new character for this one. Can you talk a little bit about Baba?

MM: Baba is played by Arsenio Hall, and it’s a really funny character. He’s like a Dark Crystal Skeksis or something, and he speaks like that. He has all these funny things to say. And he has a banter with Arsenio’s character, Semmi, and they hate each other. It’s a really cool dynamic. But Eddie actually had the idea of that character from an original TV series in the 1980s called Shaka Zulu; there was a witch doctor character in that TV series, where you see him and his eyes are red and glowing, and he’s this freaky character. Eddie liked that character and we made Baba, the witch doctor type person in Coming 2 America, a spooky kind of guy with his rattles and spells and all those things, like the original TV series, but a comedic version. That was really Eddie’s idea, and we elaborated on it and made it an interesting character mixed with Arsenio’s acting. Smilar to Eddie Murphy, Arsenio is so good in a makeup. He moves his face around really well and we could do all this stuff with his face. And we put contact lenses in his eyes, and we really tortured him. Both of them are really great in makeup and patient and really a dream for us to be working on.

KP:I didn’t look ahead of time so I was trying to figure out who was playing Baba. I could not see Arsenio in that character. How did you accomplish that?

MM: Originally it was tossed between, is Arsenio gonna play it or is he going to be busy with another character? Is Dave Chappelle going to do it? We didn’t know. And then I had said, “Look, we need to know now! You know, we don’t have much time.” Craig, the director, said, “Okay, I really want Arsenio to do it.” So Arsenio was like, “Yeah, I’ll do it. I’ll be the character.” It was so fun. And my team was incredible too. Mike Fontaine and Art Sakamoto, and Göran Lundström. Everyone, all the artists in my studio, so many dozens of artists, trying to bring all these things together, technically and on set, was quite a challenge. And we really were fortunate to have the best team with us to make it happen.

KP: It’s such incredible work but what were some of the the particular challenges you had in creating these characters?

MM: It’s an aging makeup, number one, which is just really hard to do. And then it’s also a likeness makeup of Eddie Murphy’s characters from the original film that Rick Baker set up. So you have two big challenges right there. And then having to work on super famous people, and it’s the face and close up and HD cameras and all that. Every pitfall was there to mess up. But we really tried to push ourselves to do these as good as we could.

We filmed in Atlanta and it was very hot. And I had tried to set up the whole world, “Okay, everyone has to be in air conditioning, and everyone needs to make sure the make ups don’t fall off,” and all this. And we did it all, we accomplished everything. It’s all really about planning. And we were lucky, the producers gave us time, Eddie Murphy gave us time, and everyone was patient. It’s an example of what happens when you get to have those great advantages like time, so we were very lucky. And for me, a childhood dream, so it just couldn’t get better.

KP: Speaking of time, how long did these makeups take you, from concept to realization?

MM: I think the whole film, from beginning of the build to the end of the build, was like two and a half months or three months. And we really had so many makeups to do. In fact, there were even more characters that didn’t make it into the film. There were three other characters that I’m sure you’ll see in the behind-the-scenes or something. But we did so many makeups and there were 1000 molds; there are 1000 sculptures and molds, and casting them out into painting them, and it’s just so much work. Hairpieces, wigs, eyebrows, beards, just so much to do. It’s probably a three month process.

KP: Which characters were you the most excited for?

MM: I love Randy Watson and Saul, really, Eddie Murphy’s. Those were my favorite in the original film. And to be able to do those makeups — to try to — it was intimidating, because Rick Baker was my idol. And to do those makeups was a huge challenge because they’re incredibly difficult. So those were the most exciting for me. I really studied them psychologically. How would they age? What would they do? How were their lives? It was a task.

KP: Did you get to talk to Rick at any point in preparing?

MM: Oh, yeah, I spoke to Rick. I told the producers, “I don’t want to do the film unless Rick Baker gives the okay.” Because I just I respect him so much that I said, “I will turn the job down if you say ‘don’t do it.'” So he said, “Oh, no, you have my blessing. And you know, kick ass. I won’t strangle you too bad.” But he was great. And still is our idol.

KP: When you’re working on these kinds of projects, what sort of things do you learn about yourself along the way?

MM: That I’m really OCD and a perfectionist in this sense. But in order to really do this, as much of a perfectionist as we all are in the studio, you have to be open to new ideas and to new things and to different artists to work with. It’s like being a director. It’s really like being a director. How do you manage, be creative, and make a film within your own studio there? How to work with all these different types of personalities, and people and all this and manage it, and then produce what you’re making and then show up and do the makeup. It’s quite a big process.

And I learned how lucky I really am. Because I had venerated all these older artists of the past. Rick Baker and Stan Winston and Kevin Yagher, and all the great artists at the time growing up, and now I’m in a position to be like them at the age they were then. And to be able to do the best work I possibly could, and manage my own crew of artists. I learned to appreciate the process. It’s great to be able to do a film like this because it’s like following in the footsteps of your idols and how am I handling it now? And how am I doing it all? So that’s what I learned about me in the process.

We would like to thank Michael Marino for speaking with us.

You can see his incredible makeup artistry in Coming 2 America, now streaming on Prime Video.