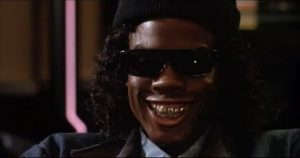 I don’t have a ticket stub for CB4 because the theater with the Universal contract only had two screens and used a generic roll of tickets.

25 years ago, two rap comedies hit the ‘90s. Fear of a Black Hat became one of my favorite movies of all time but I wouldn’t discover it until a year later. In 1993, SNL breakout Chris Rock got his first starring vehicle in CB4. He had made movie appearances in Boomerang and the drama New Jack City before, and even before SNL in I’m Gonna Git You Sucka and Beverly Hills Cop II. He was in the same cast as Adam Sandler but predated his starring vehicle by two years (same director though, Tamra Davis).

I didn’t know rap in 1993, still don’t really. M.C. Hammer and Vanilla Ice were the biggest rappers on my radar. I was a big Fat Boys fan actually but I think even they’d left the top 10 long before 1993. I’d heard about the “Cop Killer” and 2 Live Crew controversies and Snoop Dogg had the big album my junior year but that wouldn’t be out until November. I just wanted to see a Chris Rock movie. 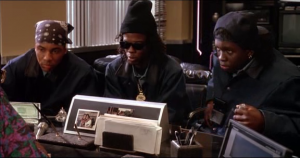 The joke is that three suburban kids play up gangsta personas to become rap stars. So it’s all the guns and crime and gold teeth and bitches and hos. Albert Brown (Rock) takes the persona of neighborhood gangster Gusto (Charlie Murphy) to lead the rap group Cell Block 4. so when Gusto gets out he comes after CB4. It adds a convoluted caper plot that takes focus away from the comedy of a good kid having success as a poser and becoming corrupted. 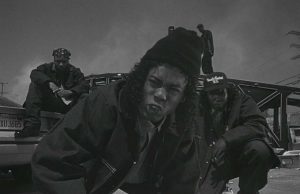 CB4 Made me laugh at the time. As a teen, I did like pushing society’s buttons and offending the establishment, so that aspect would’ve appealed to me. The titles of their songs made me laugh. “Better than P—y,” I knew what the middle letters were! Euripides’ solo song that’s all different ways to say “I’m Black” over and over again was brilliant straight faced absurdity. The actual music was funny, but as a non rap fan I wasn’t listening to the soundtrack after. The spoof songs like “Straight Outta Locash” are faithful to the originals.

I suppose the gay sex phone line was homophobic. Euripides (Allen Payne) is working gay phone sex to pay the bills before his rap career, but CB4 wasn’t alone in ‘80s and ‘90s comedies with homophobic jokes. 976 numbers were a thing in the ‘90s so that joke wouldn’t even play anymore. It would’ve been just as funny if Euripides was celebrating providing a service to gay callers, and without his friends laughing at him.
The end has Chris Rock dress up as Khandi Alexander to frame Gusto or something. It not only makes no sense but it’s transphobic when he and Otis (Deezer D) flirt with attraction and then mockingly dismiss it. 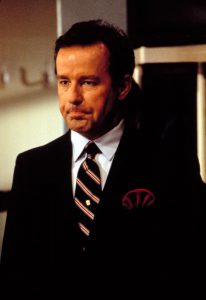 CB4 has a superficial view on politicians manipulating parental fear. Phil Hartman plays a politician who uses protesting CB4 to gain the spotlight. He and the real Gusto would be the film’s only villains, but CB4 was more focused on the generic underdog comedy that just happened to be set in the rap world. It doesn’t even really satirize the violence of the gangsta rap world, only that Albert, Euripides and Otis (Deezer D) are playing at violence. 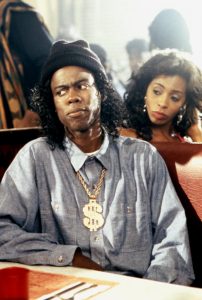 Most SNL star vehicles would have some variation on “the comedian comes up with a crazy scheme to earn enough money by a certain time.” Albert’s scheme was becoming a rap star.

As such, CB4 relies on random jokes as much as it’s own premise. When the real Gusto gets arrested the cops put a Hannibal Lecter mask on him. How many ‘90s movies had that joke? Big Ass Biscuit is a funny visual. Awkward sexual scenes are sophomoric but embrace their immaturity. The old rapper retirement home dream sequence is wonderful nonsense. 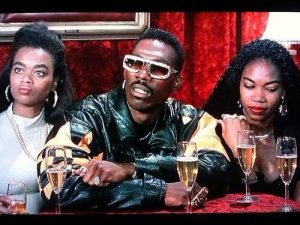 Charlie Murphy would become a bigger star 10 years later on Chappelle’s Show. David would go on to direct Billy Madison and Half Baked, two comedies with much bigger footprints in culture. Rock always struggled to have a movie career like his SNL brothers (not sisters though, until Tina Fey, Amy Poehler and Kristen Wiig). Costarring with Chris Farley didn’t work like it did for David Spade. Rom-coms, action vehicles and even directing his own movie didn’t launch Rock into Will Ferrell territory. His greatest successes were ensembles like Lethal Weapon 4, Dogma, Nurse Betty and all the Sandler movies.

Except for the gay and trans insensitivity, I enjoyed revisiting CB4. It’s not particularly timely so the random jokes are as silly now as they were in 1993. 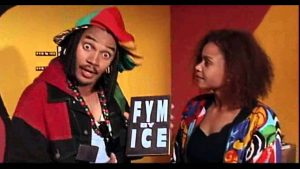 Fear of a Black Hat would be in theaters a year later but premiered at January 1993’s Sundance Film Festival. So it’s been 25 years too. I was aware of it but didn’t see it until it was on video. I don’t think it played any theaters near me in Annapolis, MD. Once I rented Fear of a Black Hat, I had no more use for CB4. I had a pretty good track record of recommending it to friends in the ‘90s and everyone loved it. 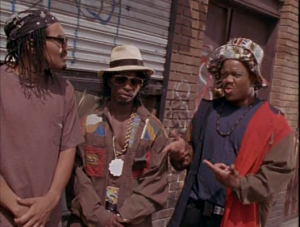 Fear is a full documentary style comedy like This Is Spinal Tap. As satire, it’s far more comprehensive. Pretty much everything that ever happened in rap up to 1993 happens to N.W.H. They’re the Dewey Cox of hip-hop. At the time rap had only existed about two decades whereas Dewey covers more than half a century of music.

N.W.H. stood for Niggaz with Hats. Their music was far more sophisticated than CB4’s too. They cover more genres, especially when the rappers go solo. This was a soundtrack I wanted and I could sing along with many of the best tracks. 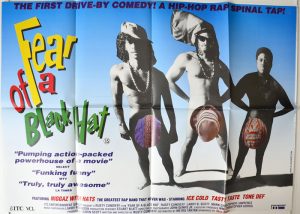 Fear of a Black Hat also pays much more homage to specific songs and not just rap. “Fuck the Security Guards” is obviously an absurdly inconsequential spoof of “Fuck the Police.” “Come Pet the P.U.S.S.Y.” sounds like C&C Music Factory. “Granny Said Kick Your Ass” is LL Cool J. “Just a Human Being” is PM Dawn. There’s even a “Froggystyle” video that was on VHS copies and now DVDs. 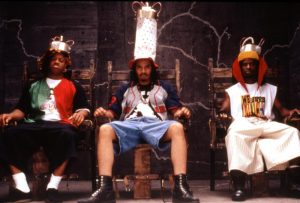 The names Ice Cold (Rusty Cundeiff), Tasty Taste (Larry B. Scott) and Tone Def (Mark Christopher Lawrence) are spoofs of specific rappers and N.W.H. is a spoof of N.W.A. Even the title of the movie is a spoof and they go as far as record labels like Innergroove. They hit all the popular M.C.s, girl groups and rappers named Ice in the ‘90s and their fake song titles were funnier than CB4’s. “Puss-why?” and the album “Ho Ho Hos” with the song “Santa Claus is Coming and Not Necessarily to Town” are funnier than “Better Than P—y.” 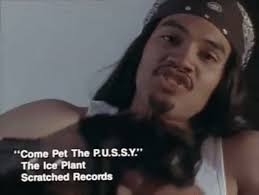 CB4 mentions the rampant misogyny in rap. They’re just kids copying the lingo. Fear of a Black Hat really holds feet to the fire with the way rappers continually justify it. Ice Cold isn’t just singing about sex to be marketable. He’s legitimately trying to get a message through the system with his hilariously convoluted justifications. My favorite one is “Come Pet the P.U.S.S.Y.” where pussy is an acronym. When he explains the Y I can’t believe he can keep a straight face.

Their videos enhance the joke. “My Peanuts” is what it sounds like and it’s got Ice Cold shaking peanuts out of his pants. I didn’t even know there was real song “My Penis.” I just thought it was funny it was such a blatant double entendre. 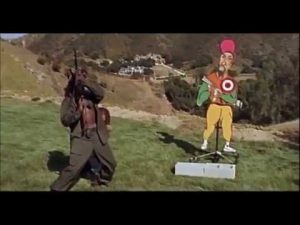 Fear of a Black Hat commits to the idea that every rap song has a pseudo political message, often blatant sexual innuendo. The tone is a loving skewering of rapper pretentions. Writer/director Cundieff understands where real rap has come from but created a ridiculous context where the same sort of attitude is not political. It’s just absurd. Cundieff clearly acknowledges there’s a vital point of view to which real rap gives voice. That doesn’t mean he can’t have fun with it.

N.W.H. is blatantly anti-white. Real rappers had valid reason to distrust Caucasians in power. N.W.H. bends over backwards to explain it away as something else. “Kill Whitey” is just a song about a bad guy named Whitey DeLuca. 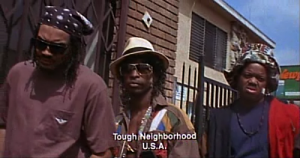 They weren’t posers tho. They really came from the street and just applied their hardcore attitude to comedy, but the source of the comedy was how much they meant it. It wouldn’t be funny if they winked.

CB4 didn’t have rappers doing movies. There’s a whole sequence where Ice Cube does an urban movie that totally spoofs the kind of movies rappers were doing in the ‘90s, complete with angry black director Jike Spingleton. Fear tackles racist cops with Ice Cold getting pulled over for nothing. 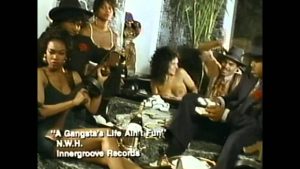 The glorification of guns is a thread that goes throughout the entire movie, and since N.W.H. aren’t posers, the film has a take on the image rappers are peddling. They may have needed guns to survive on the streets, but now they’re responsible for perpetuating the cycle. N.W.H. goes further with their most ironic video “A Gangster’s Life Ain’t Fun” which looks totally glamorous as they are singing about hardships with a straight face. 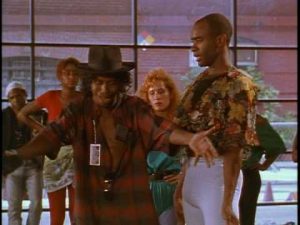 There is a gay caricature of a choreographer, and an F word in “Fuck the Security Guards.” It was still the early ‘90s, and you could say that was endemic to the macho bravado of ‘90s rappers. Fear of a Black Hat actually celebrates the choreorgapher as a gifted artist who deserves love, even if Tasty Taste isn’t interested. The only thing that’s a caricature is how flamboyant he is. It’s not glaring like in CB4, which goes out of its way to make gay and trans jokes independent of the rap storyline. Compared to In Living Color, which was on the air that year doing “Men on Film,” this is progress. 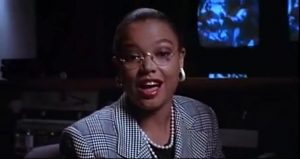 As such a specific satire of ‘90s rap, Fear of a Black Hat may feel more of its time decades later. However, it also feels more relevant. I would love to see a sequel that covers the last 25 years with the Eminems and Kanye Wests of the world, but I’m so glad that the first decades of rap are represented.

Remember when drug dealers had pagers? That’s the most dated thing about Fear of a Black Hat. All the witnesses filming Ice Cold’s police encounter with old cameras too. They’d all have cell phones now, but this was post Rodney King.

Fans of rap, music parody and comedy in general should check out Fear of a Black Hat. Especially if you lived through the ‘90s rap scene, it’ll feel more nostalgic than an “I Love the ‘90s” special. CB4 is less vital, but its anniversary gave me a chance to champion Fear of a Black Hat again.