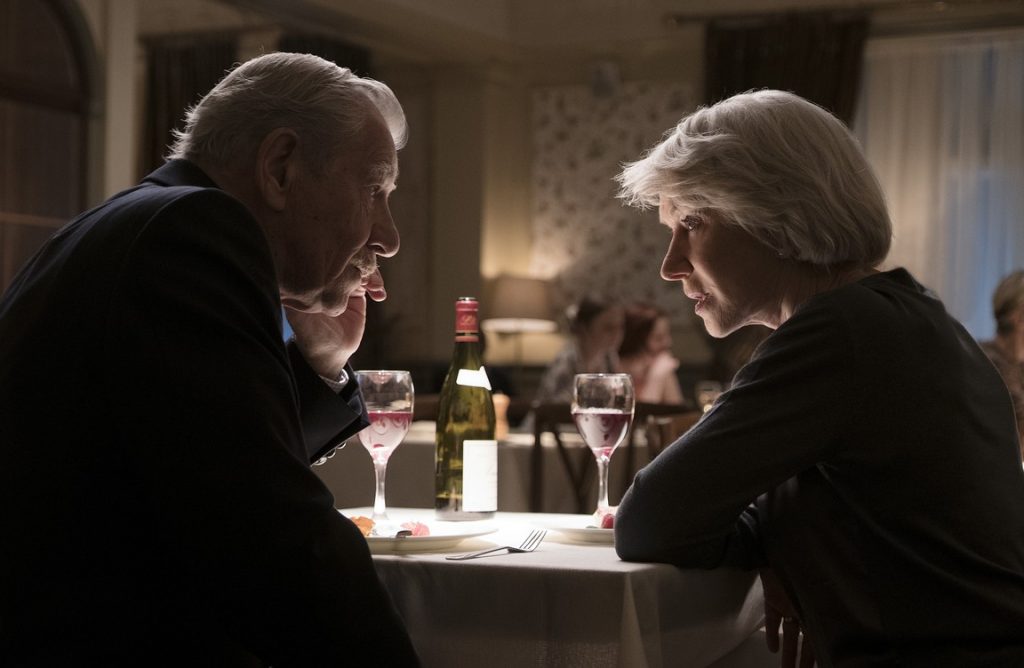 Heists films and movies about con men are designed to bring a certain kind of thrill. The British versions of these features, or at least ones relying on British performers, bring another layer of fun thanks to the proper nature of the individuals who are forced to get their hands dirty. Not too long ago, my girlfriend and I watched The Lavender Hill Mob. Regarded as one of the greatest of all British films, the ever-wonderful Alec Guinness put all of his talents on display as a mild-mannered bank clerk attempting to break bad. The Good Liar is also a fun and twisty tale, but with more malice on its mind. It may not rise to the ranks of other great British con men/heist thrillers, but it lets the veteran stars have a wicked fun time playing off each other.

Right away, the audience is clued into things not being what they seem, as we watch Ian McKellen’s Roy Courtnay and Helen Mirren’s Betty McLeish setting up online dating profiles and lying about nearly every detail. Even when the two meet for a date, both initially give false names, before warming up to each other and taking things further. Still, it’s as though the film is happy giving these two enough dialogue to support our understanding of not only their intelligence but how they both acknowledge the games people play.

The plot concerns Roy’s work as a low-level grifter (revealed very early on) going after a big score. He believes Betty is a real meal ticket, and he sets up a relationship under false pretenses, playing into one persona around her while showing off his skills as a proper con artist elsewhere. Even with the help of Downton Abbey’s Jim Carter as Roy’s partner in crime, though, complications arise in the plot to get Betty’s money. This comes in the form of her grandson, Steven (Russell Tovey), who has his own suspicions of the new man in his grandmother’s life. Still, Roy is undoubtedly crafty enough to make things tickety boo. 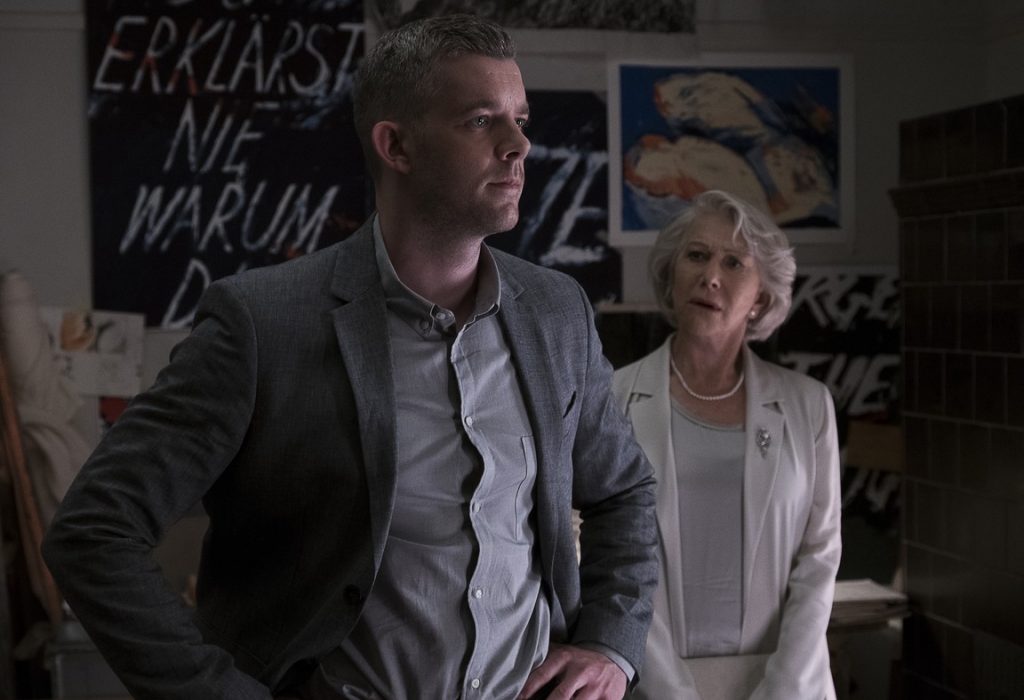 Based on the novel by Nicholas Searle, which is constructed in a manner that inserts important backstory material throughout the book, The Good Liar finds two sections of the film to delve into crucial flashbacks to help gain the audience’s understanding of what’s taking place. Perhaps that’s a flaw for the film that must ask the viewer to go along with some preposterous turns of events. At the same time, maybe director Bill Condon and writer Jeffrey Hatcher are putting trust in the audience.

Maybe I’m giving them too much credit. Still, the intended audience for a quaint thriller starring Mirren and McKellen has likely seen this kind of film before. I’m treading carefully here, as I do not want to spoil any of the fun. However, for a movie spinning a web of lies for multiple characters to buy into, there is plenty to enjoy in merely watching these two veteran actors make the most of their scenes together. By the time all of the cards are on the table, the film seems less concerned finding any kind of pride in revealing particular surprises, and more focused on helping audiences cope with being at the end of a movie that had so much fun letting these two actors work together for the first time on film.

Both performers certainly bring their A-game. McKellen delivers the sort of affable attitude and warbling jowls to the phony romantic interest performance he puts on for Betty. He’s crude and calculating when his focus lies elsewhere. Mirren plays into the role of a former Oxford professor up for something new too, letting herself be gullible in the presence of Roy. However, does she have other things on her mind, or is she simply looking past aspects that could arouse suspicion in Roy because he still seems like a viable option in spite of himself? 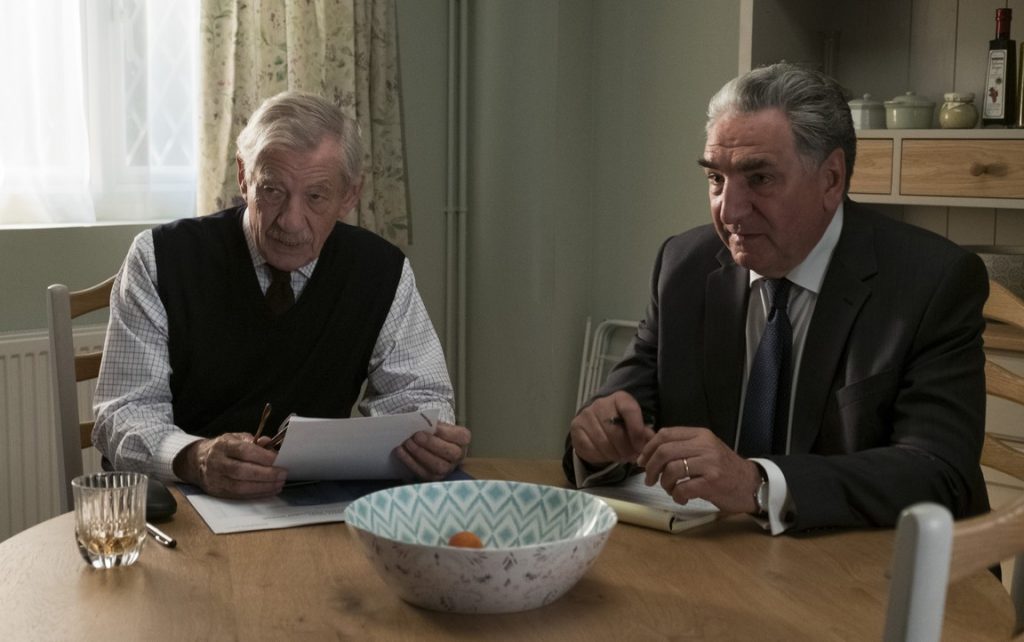 These questions have answers, but the film takes its time. It’s right to do so, as The Good Liar is fun. The machinations at play are a bit much, but one can’t help but think Condon saw this as his chance to play Hitchcock for a few months, allowing these actors to have a blast utilizing their strengths and charisma to bring life to the screen. Not without aid, Condon relies on his usual cinematographer, Tobias A. Schliessler, to develop the right visual motifs to enhance the mysteries being formed and the dichotomy between the characters. Most notably, Roy becomes entrenched deeper and deeper into darkness by way of shadows.

Does the film have much to say about the actions of these people? Carter Burwell’s score certainly tips the film towards understanding who’s on the right side, and whether or not redemption is on the table. Regardless if an audience wants to buy into anything more than a story of ego, adrenaline, and justice, allowing an elaborate plot to play out says little of a film that enjoys the airport novel mechanics in play to justify itself. Yes, overthinking what plays out may ruin the fun, but why go and do that?

As it stands, The Good Liar gets plenty of mileage out of Mirren and McKellen sinking into their roles and delighting in the relationship they share together. It may be built on lies, but the film is in no hurry to spill all the details right away. Instead, we watch them have their fun, separately as well, easing into the various plot turns and surprises ratcheting up the tension. It’s well made, sharply written, and even when things become ludicrous, watching older British actors hold onto the sincerity of the moment makes for another fine chapter in cinematic crime stories. 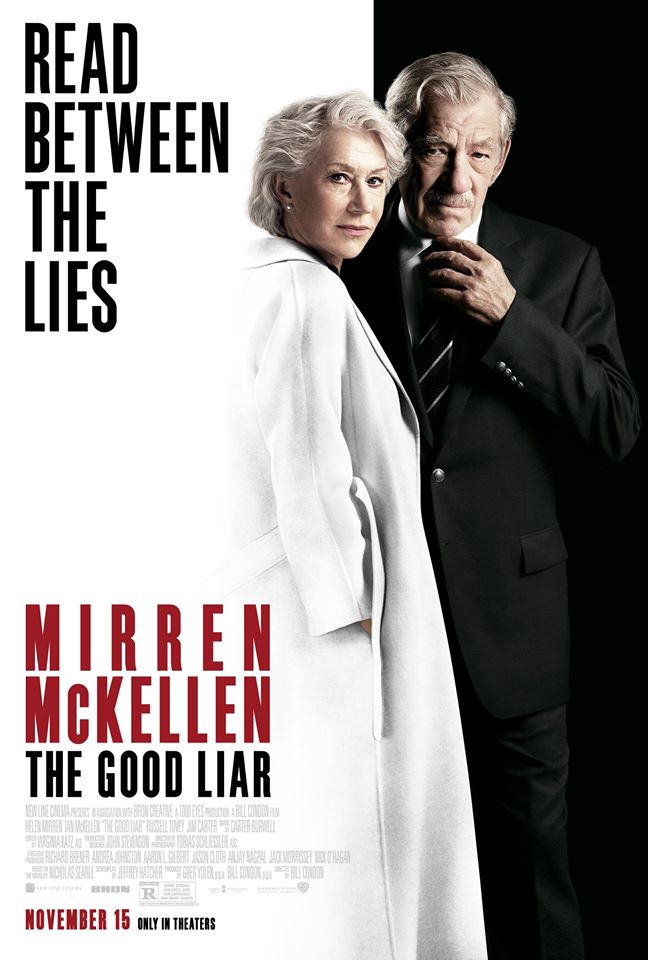 Review: Mirren And McKellen Play A Wicked Game In ‘The Good Liar’

Heists films and movies about con men are designed to bring a certain kind of thrill. The British versions of these features, or at least ones relying on British performers, bring another layer of fun thanks to the proper nature of the in...
0
Average User Rating
0 votes
Please sign in to rate.
Cast:Helen Mirren, Ian McKellen, Jim Carter, Russell Tovey
Director(s):Bill Condon
Writer(s):Jeffrey Hatcher, Nicholas Searle
Genre:Thriller