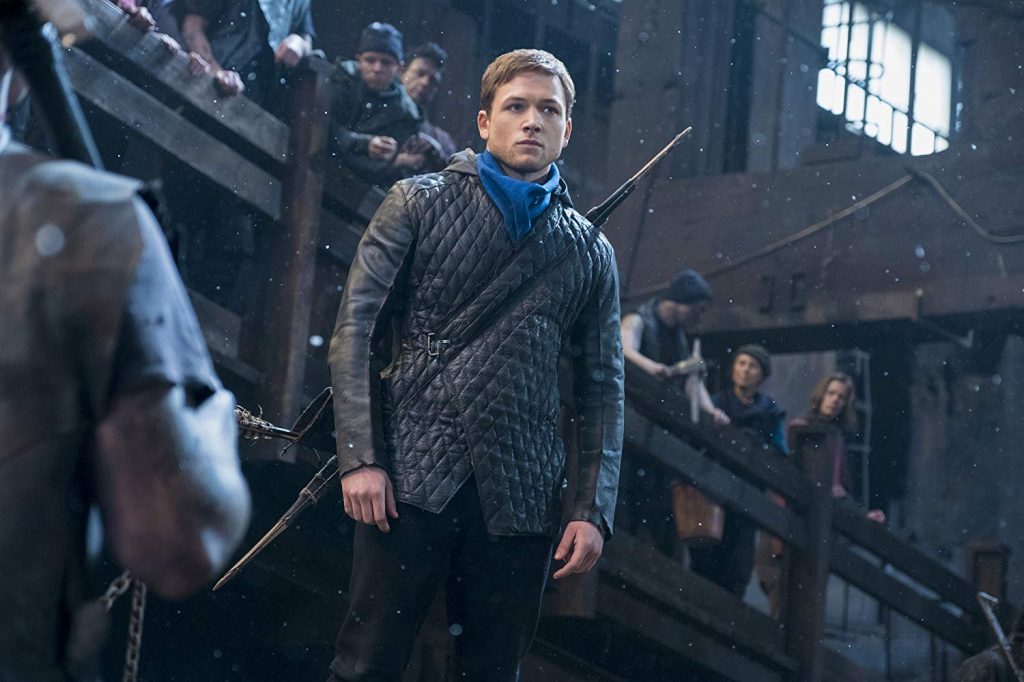 As yet another attempt to bring the story of Robin Hood and his arrow-slingin’ merry ways to the big screen, this particular iteration fails to hit the bullseye.

Honestly, Hollywood needs to stop already. This and the King Arthur story have been played to death, and frankly, we are just plain tired of them. For the Arthurian legend, there has only been one great flick, John Boorman’s Excalibur, and maybe the musical Camelot (oh, and I actually loved First Knight but that isn’t really a proper King Arthur movie).

With the Robin Hood tale, however, there have been countless movies. Just looking through the list of them is mind-boggling. Some reach far back, with the 1938 Errol Flynn movie The Adventures of Robin Hood being the most well-known, and a 1976 version with Sean Connery and Audrey Hepburn as the older Robin and Marion. Then there’s the 1991 Kevin Costner version, which is okay – and let’s not forget the Mel Brooks’ parody Robin Hood: Men in Tights. Most recently, we had Ridley Scott’s dark and gritty 2010 take, starring tough-guy Gladiator Russell Crowe. If I were to choose one I love the most, it might be the 1973 Disney animated version, where the Sherwood Forest characters are played by woodland creatures. Robin as a foxy fox is the best, amirite?

Regardless of the myriad of versions we’ve seen before, here we are again, and this one follows the more “real” and “true-to-life” train of thought — so basically, no woodland creatures or men in tights. The story focuses on Robin of Loxley (Taron Egerton), a lord who has a manor on top of a hill overlooking Nottingham, where the poor people toil in a nearby mine. Robin lives life large and when he has a chance encounter with the beautiful commoner Marion (Eve Hewson), the two fall in love.

Their romance is cut short, however, when Robin is drafted by the Sheriff of Nottingham (Ben Mendelsohn) to fight in the Crusade Wars. There, Robin experiences all the ugliness of battle, and while he tries to maintain his humanity, even trying to save the life of a Moorish commander’s son taken prisoner, it does him no good. When Robin finally returns home, he finds out he was listed as dead, sees his manor is in ruins after being commissioned by the Sheriff, and that Marion has moved on with someone else, Will Scarlet (Jamie Dornan). Robin also sees how the Sheriff has raked Nottingham over the coals with heavy taxes, leaving villagers like Marion and Will barely holding on. 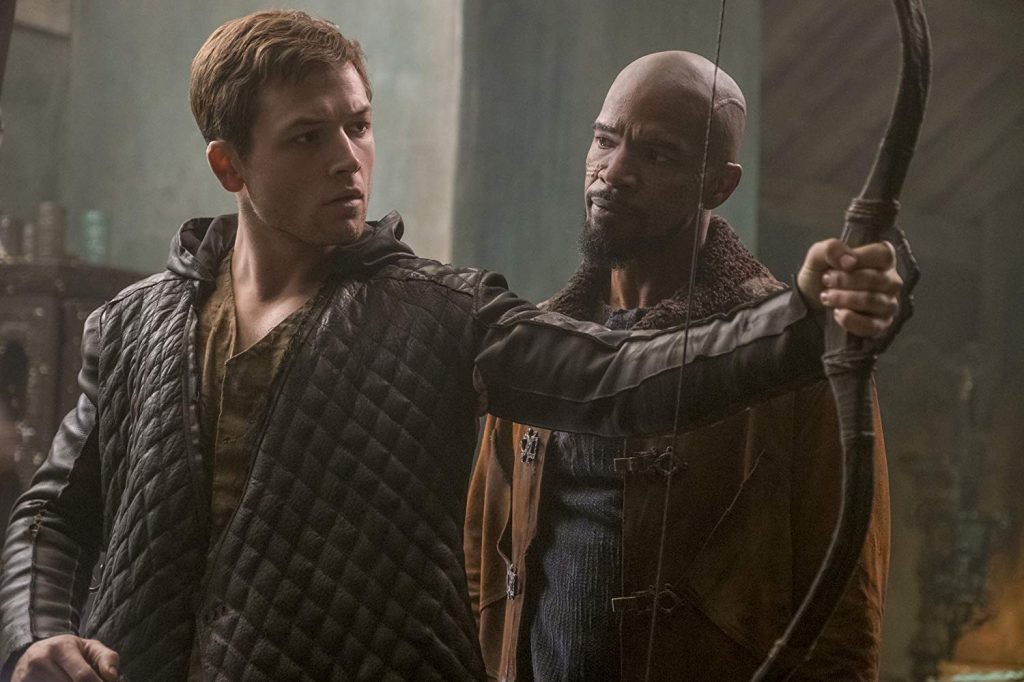 This is naturally the perfect opportunity for Robin to turn into “The Hood.” When the Moorish commander John (Jamie Foxx), whose son’s life Robin tried to save in the wars, shows up in Nottingham after following Robin there, he convinces the young lord to sharpen his bow and arrow skills and Take Down the Man. So by day, Robin continues to be Lord Loxley in order to infiltrate the Sheriff’s inner circle, and by night he wears a mask and a hood, shoots many arrows from his bow, and steals from the rich to give to the poor. You know the story. And yes, there’s a Friar Tuck (Tim Minchin) and at no point in time do they call Foxx’s John “Little John.” Doesn’t matter because Foxx just chews up the scenery anyway whenever he gets the chance. It’s a shame when the actor feels like he has to be larger than life in order to compensate for a really bad script. He is so much better when he can relax and give an understated performance (as he recently did in Baby Driver).

Taron Egerton is quite appealing in the role, especially when he’s romancing Hewson or in any of his scenes with Mendelsohn (more on him in a minute). He has such a great spark to whatever he does, but unfortunately, he is unable to elevate the film to any real level. This Robin Hood does nothing to improve upon the story. It’s the same blah, blah, blah you’ve already heard, with mostly eye-rolling dialogue and some action sequences thrown in for good measure. Director Otto Bathurst (best known for helming a few episodes of Peaky Blinders) handles the slo-mo arrow slingin’ action shots with aplomb but also seems to have also followed the path of Guy Ritchie’s latest King Arthur movie. This is a story set in medieval times, but the clothes are vaguely modern and it’s a little off-putting. Just have the actors wear the garments of the time, what’s the big deal?

Now, here’s where I veer off just a little from giving Robin Hood a completely horrid review, so bear with me. As mundane as this is – and you’re going to yawn a lot — there are actual times where the film grabs you. They are fleeting but you’ll perk up for a moment. First, there is a battle sequence at the beginning that feels like it should be in a WWII movie, arrows instead of guns. It’s harrowing, and you’ll feel like you’re watching an entirely different movie than what you know is to come. 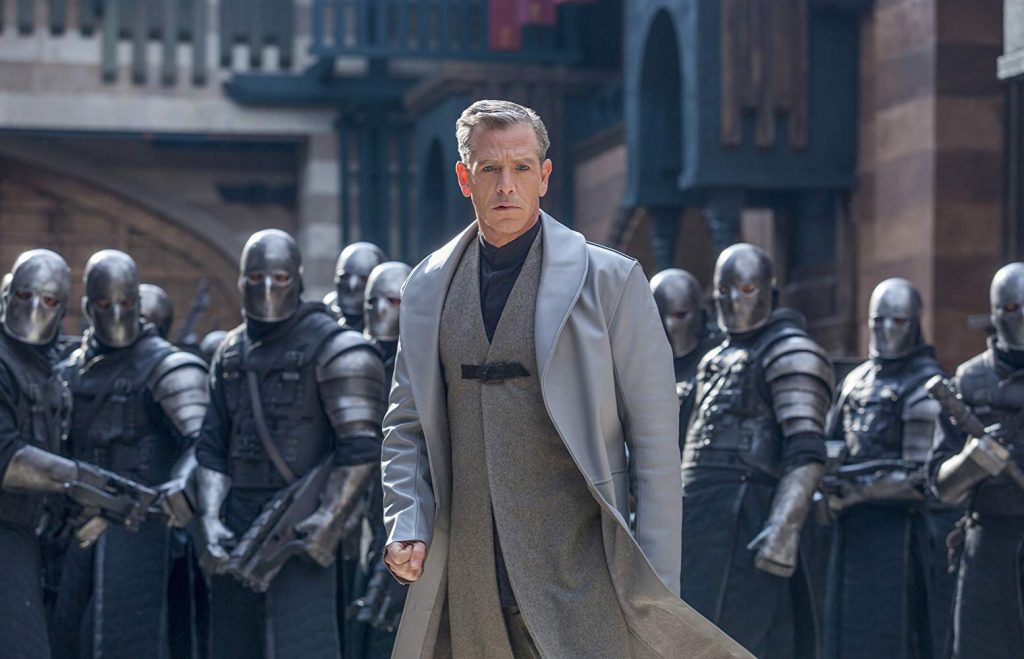 And then there are a few scenes involving Mendelsohn. The Australian actor is superb at what he does, especially when he’s given a great role and script, but — and I’m sure he’ll admit it — he also does movies for the paycheck. It’s okay, no one blames him, and, like Foxx, Mendelsohn excels in the munching scenery department. Still, there are a couple of scenes in which Mendelsohn’s Sheriff quiets down and reveals more to his character than just being the bad guy. It feels like in those little juicy tidbits of dialogue, Mendelsohn decides to give a shit.

Bottom line: Aside for a few bright spots, this Robin Hood proves it’s time to hang up the bow and arrow, once and for all. 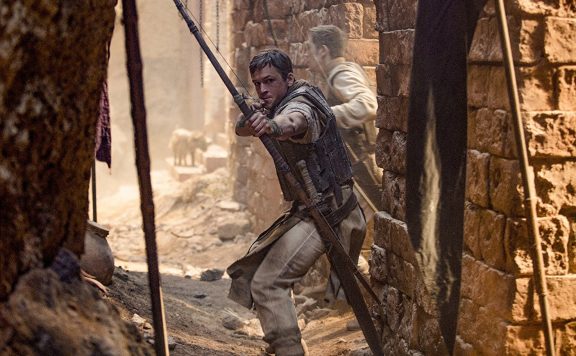 Reactions to the ‘Robin Hood’ Trailer: Action-Packed But Needed?
May 3, 2018