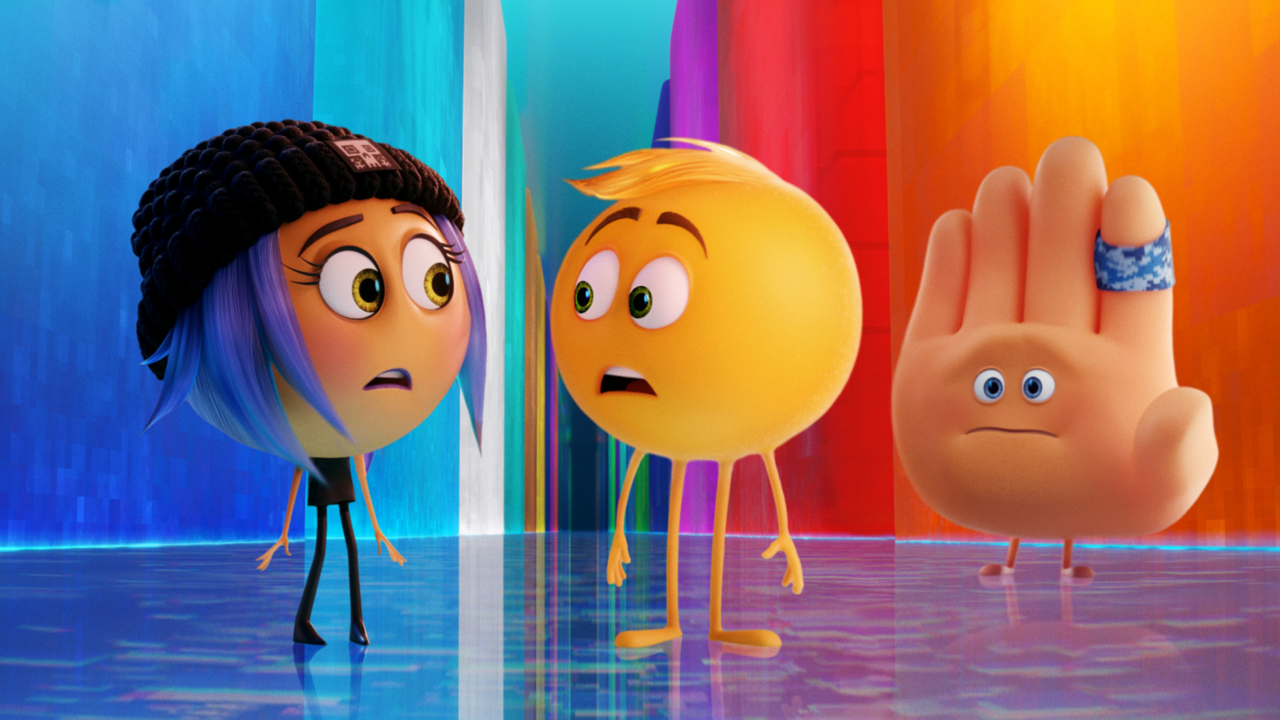 Where do you even begin with The Emoji Movie? While the next-gen emoticons are now commonplace in text messages and social media, there was some “spark of genius” out there to turn these ideograms into a full-length feature film. Remember The Lego Movie a few years ago? That clever crowd pleaser could have easily delved into an abysmal trap of cynicism. The Emoji Movie, however, fully embraces such an atrocity.

The entire premise of The Emoji Movie centers around the phone of a confused adolescent named Alex, who has girl problems. There’s a real shocker. But our “protagonist” is Gene (voiced by T.J. Miller), a meh emoji from Textopolis – a bustling city inside Alex’s smartphone. Each of the emojis has its purpose – from smiley face to poop (yes, poop), they’re called upon for their singular expression. Gene can’t help just being a meh as his other emotions begin to surface. During a text message, Gene screws up his signature “meh” with a hybrid of expressions and puts the rest of the emoji society in jeopardy.

With the assistance of a hacker Jailbreak (voiced by Anna Faris) and hand, Hi-5 (voiced by James Corden), The Emoji Movie transitions into some sort of adventure around the phone. Igor director Tony Leondis shoots for a run-of-the-mill “be yourself” message, but it gets lost in the deep interwebs of a cinematic apocalypse. There’s simply nothing new brought to the table with The Emoji Movie. Bright colors and occasional poop jokes aren’t here to save the day. Did it do any wonders for Michael Bay and the past four Transformers films?

The Emoji Movie feels more like the long-lost unwanted sibling of Wreck-It Ralph and Inside Out as the lead emojis painfully bounce from one app to the net. Gene, Hi-5 and Jailbreak fail and are a soulless trio, barely propelling this 86-minute commercial for apps and cyber culture. The sad part about the whole situation is T.J. Miller, James Corden and Anna Faris all have immensely better comedic credentials under their belt. Miller hit home runs before in Big Hero 6 and Deadpool. Yet here, meh can’t even begin to describe the intense frustration at hand.

Instagram, Twitter, Spotify, Candy Crush and Just Dance all receive their respectable shout-outs, pandering the tech-savvy youngsters. It’s surprising that these companies want to be associated with a disaster such as The Emoji Movie. Leondis is making the same moves as the aforementioned Disney films as we experience various worlds. Yet along the way, there is no emotional resonance only empty visual noise. Quite often, the screenplay written by Leondis, Eric Siegel and Mike White has a tendency to spell every bit of humor out the audience. A firewall is dumbed down for the audience as a humongous wall on fire. Trolls are literal trolls and an envelope labeled spam. It’s these irksome choices that drag the film further and further into the abyss.

The human element is equally boring as teenage Alex is as one-dimensional as it gets. It boils down to the biggest crises in his life are interacting with a girl and a glitching phone. That’s what drives the hackneyed plot of the overall scope of The Emoji Movie – a girl and a glitching phone. Seriously? Summer 2017 hasn’t exactly been the best for animated films. And while Cars 3 and Despicable Me 3 were both mediocre to decent, compared to The Emoji Movie, it’s like watching a film from the Disney Renaissance.

For someone who doesn’t use emojis that frequently in digital communication, The Emoji Movie turned me away from even more. There is a brief reference to the “geriatric” emoticons. Oh emoticons, how we’ve missed your simplicity. But for the rest of The Emoji Movie, there’s is only one simple option – delete, delete and another delete.