I have been captivated by Andrea Riseborough since the year I saw her in Disconnect and Oblivion. That wasn’t even the beginning of her career so there’s still plenty of Riseborough to see. She had four movies at Sundance but Nancy was the one in which she starred as the title character. She also played Mandy in Mandy but that was more about Nicolas Cage avenging her. 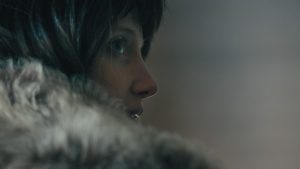 Nancy (Riseborough) is caring for her mother (Ann Dowd) and passing the time by impersonating grieving parents on support boards. She even meets a grieving father (John Leguizamo) before coming clean. When she sees a story about a 30-year-old missing child case, she realizes she looks a lot like the computer aged photo. So she calls the parents claiming to be their daughter grown up.

On the surface this could be a very cruel premise, and maybe it still is under the surface. The parents aren’t fools, so they entertain the possibility all the while keeping a certain distance. They do a DNA test so there is a time limit. Within a few days they’ll get the results and this whole episode will be over.

So when Nancy gets close to the mom, Ellen (J. Smith-Cameron) it’s not even bittersweet so much as a temporary lark. They’re not even going to have a whole week so it’s not like they’re forming deep bonds that will get ripped apart. Leo (Steve Buscemi), the father, is more measured and more protecting Ellen.

Nancy is a mellow movie that’s mostly about living with these performances. Riseborough transforms into this lost character grasping for something to be a part of. The parents are sympathetic, but not helpless.

Nancy opens in a 4:3 aspect ratio and expands to 1.85:1 midway through. It could be obvious to say it represents Nancy’s world opening up.

Nancy’s cat is as much of a plot as the family. I was most worried about Nancy bringing the cat to this foreign environment. The thought of mine ever leaving the house is my greatest fear. I literally have nightmares where I have to keep my cats in a new house and I’m terrified they’ll get out. The cat subplot is the most real part of the story. Whatever happens with the DNA test, she still has a cat.

Since Nancy is so open to interpretation, others may get many different things out of it. It’s well done so the opportunity is there to put it through your own personal prism.