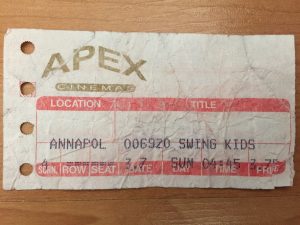 4th theater out of 4 at the mall didn’t bode well for Swing Kids’ opening weekend.

The 25th anniversary of Swing Kids is likely to be celebrated by a lot of people who grew up in the ‘90s watching it on video or cable. They certainly didn’t see it in theaters. It opened to $1.9 million on this weekend in 1993, on its way to a mere $5 million total gross. I was there on opening weekend, but that ticket stub shows Theater 4 at the mall, which is the smallest theater they had. I usually never got to see movies in the smallest house because I would always see them when they opened and packed the big rooms, so at least I have a memory of seeing something in it.

I appreciate the effort to make ‘90s kids understand the Holocaust and how the Nazis recruited children. It must have been a tough sell, given its box office. I was certainly aware of it and wanted to see it, but its only lasting impact in 1993 was as the subject of mockery. 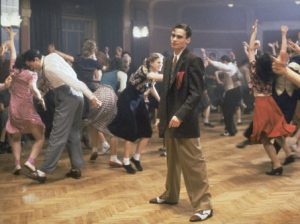 I remember Dennis Miller mocking the kids fighting Nazis with dance on his HBO show Dennis Miller Live. Ethan Hawke likes to razz his friend Robert Sean Leonard about it. “I always tease Robert and tell him it’s the best Nazi swing movie ever made,” Hawke said at the Los Angeles press junket for Chelsea Walls for which Leonard starred for director Hawke. “Of the Nazi swing genre, it’s a classic.”

Perhaps the juxtaposition of the Holocaust with something frivolous like dancing was asking a lot. Yet there really were swing kids. Peter (Leonard), Thomas (Christian Bale) and Arvid (Frank Whaley) rebel against the Hitler Youth in 1939, going to underground swing clubs and buying the music of banned artists on the black market. When Peter is caught, Thomas joins up to help him rebel but the training tears them apart. 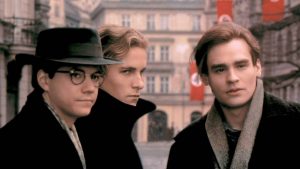 Swing Kids is as relevant to today’s resistance as it was to 1939 Germany. Maybe there wasn’t much to resist in 1993, so it fell on deaf ears. That doesn’t quite explain its popularity in the 2000s, but perhaps Bale’s rising star attests to that. Today it’s the ‘60s all over again. We’re putting money where our mouths are with #MeToo and #TimesUp and marching for gun reform, women’s issues, immigration issues, Black Lives Matter, opposing the Muslim registry (yeah, don’t think we’ve forgotten about those issues) and more. 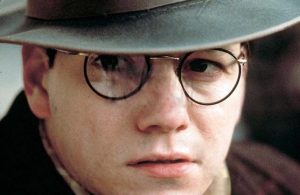 Check out the big brain on Arvid!

It’s a lot easier to relate to the resistance on display in Swing Kids now. There’ve always been causes to fight for, and even if the swing kids couldn’t prevent the Nazis from controlling Germany, future generations can vow Never Again. The way Arvid stands up to Nazis trying to manipulate his music is important. Nazis come into a bar where he’s playing and request one Nazi song. He refuses to play it, leading to the Nazis exerting their power. It doesn’t end well for Arvid, but he did not play that song. When it’s that dire, saving that one last scrap of humanity may be worth fighting for. 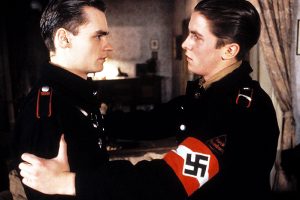 Swing Kids also shows how a friend like Thomas can be seduced by propaganda. The Nazis offer him a chance to fly planes and he starts to believe the anti-Semitic rhetoric. All it took was the promise of some power to make Thomas give up his ideals. That’s how easy it is if you don’t see through the Devil’s gifts. 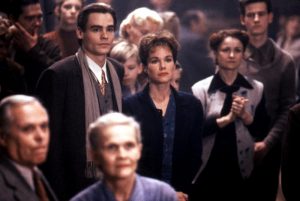 Even parents say just go along with it, so Peter ultimately has to resist his own mother (Barbara Hershey). Conversely, another character reports his own father. That’s how the Nazis tore apart families. It’s worth teaching young viewers that these authority groups promising you the world don’t really care about your success. They’re using you. Lest anyone in the audience side with Peter’s mom, Swing Kids makes sure to depict the horrors of Nazi tactics Peter is exposed to when forced to do their dirty deeds. 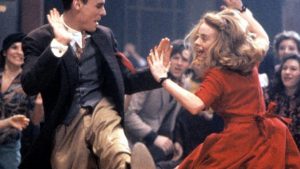 The dance is contagious. Even if the music sounds old to you, watching people kick their legs and flail their arms with such passion and furor gets you moving. And really, check out the ensemble dancers in the big club scenes. Swing dancing would have a renaissance, but a few years later when Swingers opened and bands like Big Bad Voodoo Daddies got popular. 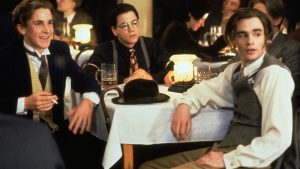 Where I will give the Millers and the Hawkes acknowledgment is the ending of Swing Kids may oversell the earnestness a tad. When children chant, “Swing heil” in the night sky as Nazis take the swing kids away, yeah, they might not have earned that. Maybe that’s what comedians were mocking, assuming they had actually seen it. 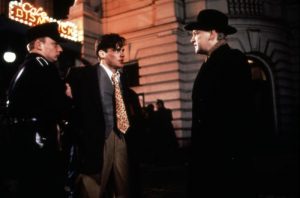 That’s right, Kenneth Branagh was in Swing Kids too, uncredited.

I forgive a maudlin ending though. If one watched Swing Kids today, the hope would be that the swing kids live on in today’s youth rebelling against reprehensible authority figures. I certainly can’t imagine a studio producing any movie about pre-WWII Germany in 2018. But maybe an indie arm like Fox Searchlight or Sony Pictures Classics could make such a niche movie and get it to the right audience.