I believe the most hyped I ever was and ever will be for a movie was Back to the Future II, followed by Terminator 2. It’s possible I was more hyped for True Lies than even T2 because, while I liked The Terminator and was excited for the sequel, afterT2I knew how good an Arnold/James Cameron movie could be. Plus Arnold was looking for a comeback after Last Action Hero so would be trying even harder.

True Lies also opened two weeks into my career as an usher at Apex Cinemas Harbour IX and it was the first film I was allowed to stay after work Thursday night and watch at 1AM. I was so hyped at 3:30AM I thought I’d never get to sleep but as I recall I did in fact fall asleep and wake up for work the next day. Probably a 2PM shift.

Arnold had had success in action and comedy separately but combining them (to a greater degree than one liners) in Last Action Hero was too much for his fans. It seemed like James Cameron came in and said, “I’ll fix it for you. Here’s how you do action comedy.” I was thrilled it included such broad gags as slamming the attack dogs together and a horse/motorcycle chase, and action as hardcore as the bathroom fight. That worked for audiences too and True Lies was a hit. It was the comic adultery subplot that became a point of contention. 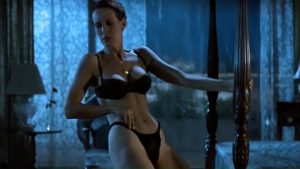 True Lies was based on the French comedy La Totale, and the middle of the movie is extremely faithful. Cameron beefed up the action in Acts 1 and 2 because Hollywood can go bigger than the French. I’m surprised La Totale never got an American release off the heat from True Lies. It was never released with English subtitles or dubbed, not even on VHS. Most people don’t even know True Lies was a remake.

I really wish Cameron had done more one off movies because we need regular movies to be as good as this. Cameron could bring his craft and high standards to a one off action movie without trying to change cinema every time. I get that he earned the clout to do his passion projects, but it would be so great if standard genre movies were a good as James Cameron movies.

Critics have felt True Lies was sexist and misogynistic since it came out. Even people who like the movie regret its seedier elements. Anyone’s personal reading of the film is valid and if True Lies rubs you the wrong way, you certainly never have to watch it again. People I respect feel it is sexist. I can only share why I think it is not.

I was surprised when True Lies came under fire for sexism for its treatment of Helen (Jamie Lee Curtis) because it always seemed clear to me that Harry (Schwarzenegger) was wrong for putting her through that. When Harry finds out Helen is having an affair, he puts surveillance on her, eventually interrogating her and giving her a mission to perform a strip tease for him. To me, the joke is how wrong Harry is, and he’s ultimately no match for Helen who stands up to him and owns that whole subplot.

Harry was an asshole demonstrating exactly why he was a bad husband who couldn’t adjust from spywork to functional family life. In comedy we can laugh at people doing reprehensible things that we know are wrong. He makes her do a striptease because he’s so selfish he doesn’t even consider that it’s demeaning. He also doesn’t consider that his wife won’t actually fuck a guy she thinks is a stranger so Harry’s seduction plan falls apart because he knows his wife so little.

I mean, does this look like a hero to you? It doesn’t to me.

When the camera shows Harry stewing over Helen’s secrets, I thought he was the villain for viewing his wife like his terrorist targets. It was a satire of the Arnold brooding shot so I was surprised to hear people say that James Cameron portrays Harry heroically. It’s possible he did and I just applied my own moral compass that wasn’t there in the movie. It’s also possible that the iconography of Arnold as a hero was too strong for viewers to adjust to Arnold as a heel. If they read the film as, “Go Harry, get that bitch!” then yeah, that would be bad.

It’s also interesting that this is the part where Cameron was completely faithful to La Totale. The interrogation and the hotel seduction (without the striptease) were directly from La Totale. So the striptease is exploitive but that’s the joke. It’s a buttoned up housewife doing what she thinks is sexy, so your mileage may vary how well it straddles the line between satire and exploitation. Personally I think Curtis nails it and the point of the movie is that Harry learns she is quite capable and he should have included her all along.

The French version has Harry and Helen ballgagged by the terrorists at one point so Cameron took that out. The machine gun falling down the stairs and shooting all the bad guys is from La Totale too although Helen hits one bad guy before she drops it. But the most objectionable part of True Lies is the part that Cameron didn’t invent. Sure, he could have softened it were he inclined, and maybe it did appeal to him because he was going through a divorce, but he didn’t invent it. 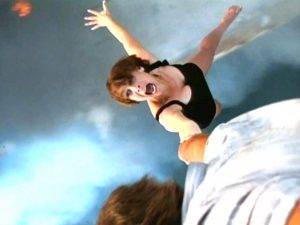 I even had a chance to ask Jamie Lee Curtis herself to weigh in in 2010 and she said, “Oh, please. It’s not sexist at all. Who cares? Who gives a shit? Honestly, who cares whether or not True Lies is sexist? Who cares? Is it funny? Yeah. Does it have some action? Yeah. Is it a little sexy? Yeah.”

Curtis’s feelings support my reading of the film but even if she doesn’t feel the role was sexist, people who read it as such can still be valid. And granted, I was asking her about a then-16-year-old movie and she wanted to talk about You Again. And she may have just been being outrageous to get a rise out of people, but I do believe she is speaking sincerely about her work. People want to apply all sorts of subtext to it when she was just trying to do a sexy dance and funny pratfall. I think she has a point. I’m all for holding inappropriate humor accountable, but her intention was to be funny and sexy. She succeeded and it may be okay for that to be the end of it. That’s easy for me to say when I interpret it as Harry’s the asshole.

25 years and Jamie Lee Curtis herself saying “who cares?” hasn’t ended this debate so neither will this retrospective. True Lies still has fans who love it in spite of its sexism. I still love the movie I see where a negligent husband makes things comically worse before learning his lesson, although I have not found any comments from Cameron supporting my interpretation either. It’s funny that Forrest Gump came out a week earlier and I feel like it took us years to discuss how misogynistic that movie is.

The theme that action heroes would actually make terrible spouses was explored again in Mr. and Mrs. Smith. It was perhaps more successful there because it was a two hander where both Pitt and Jolie had agency to influence the plot. I like Mr. and Mrs Smith but the action has nothing on ‘90s James Cameron and it’s not the “oh no he didn’t” comedy of True Lies. 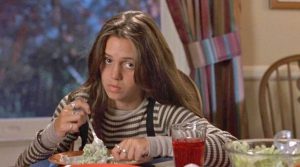 Of course, the worst news about True Lies is the very true story that stunt coordinator Joel Kramer molested Eliza Dushku while she worked on the film. I’d wish the film out of existence if it could spare her enduring that unconscionable abuse. Many movies still exist where people were abused in their makings and probably countless abuses we don’t even know about. The least (truly the very least) I can do is think about Dushku every time I discuss or view True Lies for the rest of my life. I have not watched True Lies since Dushku told her story and I don’t know when I ever will again. It gave me 24 years of joy, but at what cost?

You’d think True Lies would have been my favorite movie of the year but the fall of 1994 brought us Quiz Show, Shawshank Redemption and Pulp Fiction. Pulp Fictionblew every movie out of the water by changing my idea of what a movie could even be. 1994 was a landmark year for movies and for me. I’ll never forget True Lies, though its legacy only becomes further complicated in the years since. 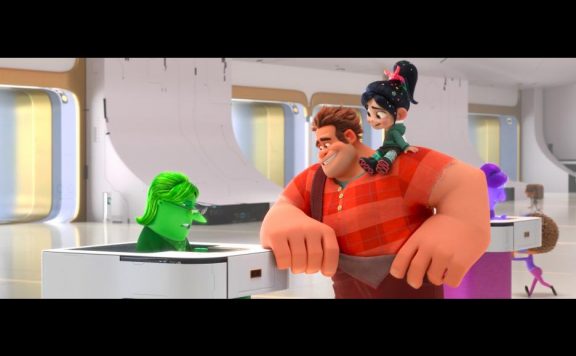