Before I Wake got lost in the shuffle when Relativity declared bankruptcy. They had greenlit Mike Flanagan’s follow-up to Oculus since it had been a hit for them (I still say the follow-up should have been the musical Rockulus.) Now it makes sense for Netflix, since the streaming service had success with Flanagan’s subsequent films Hush and Gerald’s Game, with his Haunting of Hill House series on the way.

Jesse (Kate Bosworth) and Mark (Thomas Jane) adopt Cody (Jacob Tremblay). They are still grieving the death of their son Sean, and much of Before I Wake is really about these parents’ grief and healing. But bad stuff starts to happen when Cody sleeps, because it is still a horror movie. 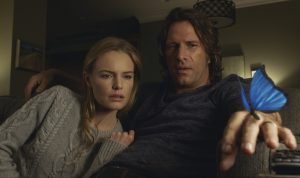 Looking at Flanagan and screenwriter Jeff Howard’s body of work, they seem to specialize in dealing with family drama through the vehicle of horror. Of their movies, only Hush is more of a straightforward individual survival tale. Oculus, Ouija: Origin of Evil and Gerald’s Game all deal with true horrors that can’t be defeated so easily: abuse, grief and mourning. 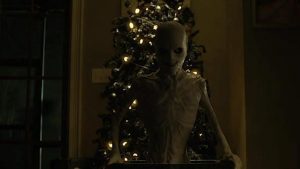 Horror provides an entertaining metaphor, while not distracting from the real heart of the drama. Before I Wake has plenty of creepy dream visions that appear when everyone else is awake. These aren’t Freddy Krueger dreams where your greatest fear becomes a colorful ‘80s set design. These are shadow men, thin figures, and pretty butterflies that becomes scary moths.

Those things may or may not scare you. Either way, I am more fascinated by the way in which Flanagan and Howard weave the supernatural into a family story that comes first. Bosworth and Jane are believable and moving as parents trying to turn a tragedy into something positive. In the Flanowardverse, it is the clear link between Oculus and Ouija: Origin of Evil.