The new family adventure film, Finding ‘Ohana is now streaming on Netflix. The film, which is an original film, seems to pay homage to many great adventure films that have come before it. Films like The Goonies and Indiana Jones seem to have inspired some of the scenes within the film. However, while the film may seem like it pays tribute to those great adventure stories of the 80s, Finding ‘Ohana embraces representation by being a story centered around Hawaiian culture. I recently spoke with the two young stars of the film, Kea Peahu and Owen Vaccaro, who spoke to me about their favorite films, leading a big family adventure film, and what representation means to them as up and coming actors in the industry.

Scott Menzel: Hello, hello, hello. How are you today?

Owen Vaccaro: Good. How are you?

Scott Menzel: I’m good as well. I’m so happy to be talking to you about this delightful little movie that reminded me of a live-action Nickelodeon movie from the ’90s. I want to start with Kea because I’m curious, what made you want to get into acting? And to follow that up, what was it like leading a film with your first role?

Kea Peahu: Okay. First of all, I love your background. Super cool.

Kea Peahu: Second of all, my mom took me to an acting event that she heard over the radio station, and I have never, ever acted before, so I had no experience. This was when I was seven years old. From the first time I did it, I don’t know what it was, but I just enjoyed its feeling. I enjoyed getting into character and saying things I’d probably never say in real life. This audition going into it, I knew it was something that I really wanted to book from the moment I read about the script and who my character was, the character that I was auditioning for. When I actually booked it, I was in so much shock. It’s my first ever movie, and I was the lead role for it, so that definitely made that mean a lot to me. Also, the fact that it was filmed in Hawaii is where I’m from it also meant a lot to me.

Scott Menzel: That’s awesome. Owen, for you, I loved you in The House With Clocks on the Walls. I thought you were terrific in that film, and that was a movie where you got to lead it. What was it like playing a supporting role?

Owen Vaccaro: It’s great. It’s not super different. It’s really just the showing up to set and being there every day. That’s definitely the hardest part, and Kea, I’m sure you can agree with that because you were on set almost every day. I wasn’t there for the last two weeks because that was when they were shooting in New York, right, Kea?

Owen Vaccaro: Yeah. It’s a pretty similar experience, you get all the same treatment as anybody else, and I think that’s great.

Scott Menzel: We always ask this question to older actors, but, for you, how do you feel about representation and seeing Hawaiian culture on screen? What does that mean to you?

Owen Vaccaro: I think, especially with all the crazy, some good, some bad things that are happening right now, movies like this about culture and the importance of it and your family are all things that people really need to hear whether they like it or not. I’m really proud to a part of a movie that’s so important, like this one that is about culture.

Scott Menzel: Great. Growing up, I’m sure you both watched a lot of movies. What was one of your favorite adventure films growing up? We’ll start with Owen.

Owen Vaccaro: Oh God, there are so many. I think Goonies is definitely one of them, and Goonies is very similar to this movie. But adventure movies, I was more of a comedy movie kind of person, so my favorites were movies like Elf, and movies like those were amusing. Oh God, I don’t really know. That’s a really good question. I can say this; my favorite movie ever definitely is Pitch Perfect.

Scott Menzel: There you go.

Kea Peahu: I love the Goonies. I’ve seen it one time before we started filming when I was 10 when I was younger. Then Owen and I actually watched it during filming, so that was fun. I don’t even remember the movies I watched, and I was younger, but the first movie I watched was the Lion King. So I went from those kinds of movies to scary movies, so now I love horror movies and adventure movies. They get me so interested. But yeah, I’d definitely say my favorite right now would have to be Finding ‘Ohana.

Scott Menzel: That’s awesome. What a great way to end. Thank you so very much. I think you both are going to have a very long career ahead of you. 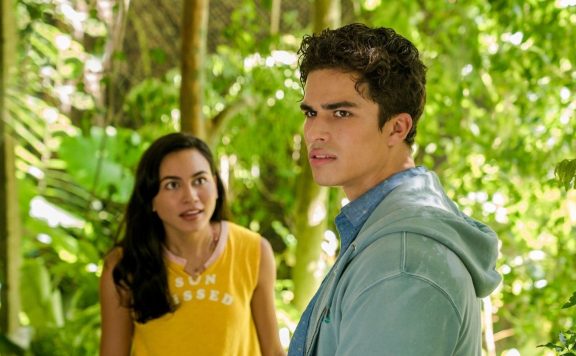