The Purge franchise has a fascinating premise, but none of the films have really exploited it effectively. And it’s okay if they want to go lowbrow with a highbrow premise, but then the lowbrow has to be equally bonkers. The idea that an annual night of free crime makes the rest of the year safer is outrageous. That each of the Purge movies devolves into loud, ugly violence may say more about the audience for this lucrative franchise than the movie itself says about society. 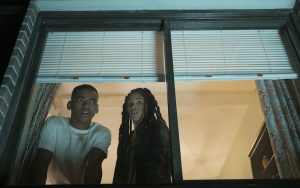 After three movies where The Purge is an accepted tradition, The First Purge takes us back to ground zero. The very first experiment was conducted in Staten Island, where volunteers were paid $5,000 to stay home rather than fleeing to safety, and more if they actively participate. That’s a powerful motivating factor but don’t worry, it never comes up once the purge begins. It’s still the usual purge despite the more detailed setup. 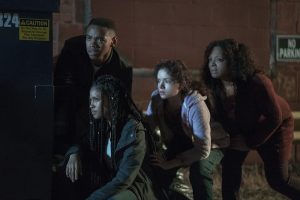 The persistent flaw in the Purge movies becomes clear again in the The First Purge. The only way these Purge movies work is if the characters are complete idiots. The Purge: Anarchy had a character decide to go on the hunt for his son’s killer, but even he ran into idiots who got stuck out on the street. Any reasonable person would leave town, or at least hole up for the night. Only idiots think it’s a good idea to go out and try to meet up with someone on a night where murder is not only permitted, but encouraged. Idiots and crazy people. 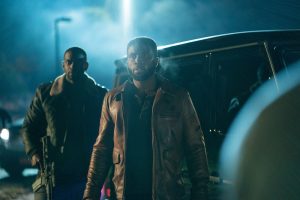 Why would the savviest drug dealer Dmitri (Y’lan Noel), who is smart enough to order his men not to purge, invite two new women to his home tonight of all nights? Knowing that rival gangs were after him and would have a free pass tonight? Why would Nya (Lex Scott Davis) think she could go out and rescue her brother Isaiah (Joivan Wade) by herself in the middle of the purge? Why are people having parties outdoors on the night when strangers are allowed to show up and kill them? Maybe they don’t believe it’s really going to happen? I mean, if they’re that misguided the movie does not even pay lip service to the suggestion. They’re just partying.

Crazy people I understand. This night would give the insane a platform, but then anyone insane enough to participate wouldn’t wait until purge night anyway. They’re insane year round, not just on one night. 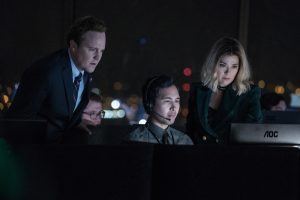 Dr. Updale (Maria Tomei, filming all of her scenes in one room, hopefully in a single day) studies the participation in the purge. When the results are unexpected, the film posits an explanation for how the purge escalated that completely undermines the entire premise. If the purge is not society’s natural instincts coming out of hiding, if it’s something that was manufactured to begin with, then the Purge movies are literally saying nothing about us. They are literally manufactured to sell violence and the joke’s on us who believed they might have a message, albeit a muddled one at best. 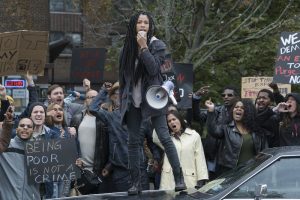 LEX SCOTT DAVIS as Nya in “The First Purge.”

The FIrst Purge is directed better than the previous entries. Establishing shots of the protests and housing projects are well composed, and even jumbled action scenes are more coherent than the franchise’s usual shakycam. It’s still James DeMonaco’s world though. He still wrote the screenplay and it still plays by his rules.

Be sure to stay through the credits so you can see a promo for this fall’s The Purge TV series on USA. Perhaps a series on basic cable won’t be able to rely on gratuitous violence (although if The Walking Dead can, so can The Purge.) Here’s hoping they’re forced to tell a compelling story with this fascinating premise. But then after four exploitation movies, would that ultimately let the fans down?