With Captain America: Civil War juggling the larger story of Captain America’s allies battling Iron Man’s allies, there wasn’t much room to wrap up the threads of The Winter Soldier. The film opens with an extended action scene of Cap and Black Widow pursuing Crossbones and his gang, and it is it Scarlett Witch’s handling of Crossbones’ suicide bomb that prompts the political debate that leads to the civil war. Spoilers for Civil War follow, but what Marvel fan hasn’t seen Civil War yet?

After the film opened, Frank Grillo tweeted at Marvel asking what he should tell fans who ask him why Crossbones died so easily? The tweets have since been removed and Grillo’s account protected. I should’ve screen capped them back the. Last week, Grillo was at TCA promoting his Audience Network series Kingdom, so I got a chance to ask him if Marvel responded to his Crossbones tweets. 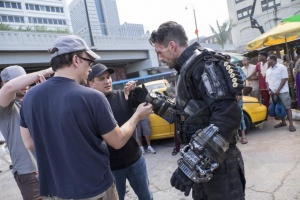 Frank Grillo as Crossbones behind the scenes with the Russo Brothers

“It was a point of contention,” Grillo said. “I almost didn’t do the movie. I love Marvel. I love those guys but I was like it’s not where I thought this was going. They’re like, ‘Hey man, there’s never and end of a character and blah blah blah.’ After a while, I just said what I wanted to say and that was the end of it.”

Grillo did not indicate any fallout with Marvel, although he doubts he’d take them up on any future offers to reprise the role. “It was what it was,” Grillo said. “I’m glad I did it and I think that chapter of my life is over.”

Even though Marvel themselves acknowledged that no one really dies for good, and a suicide bomb might not be the end of Crossbones, the expedient handling of Crossbones’ story marked the end for Grillo.

Kingdom returns May 31 on Audience and we will bring you our full interview with Frank Grillo in May.

With Captain America: Civil War juggling the larger story of Captain America’s allies battling Iron Man’s allies, there wasn’t much room to wrap up the threads of The Winter Soldier. The film opens with an extended action scene of Cap and B...
0
Average User Rating
0 votes
Please sign in to rate.