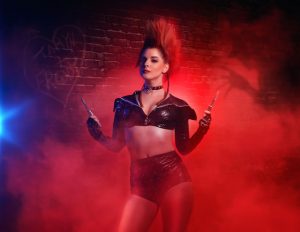 Franchise Fred spoke with Ama Lea about some of the shoots for both Year of Fear 2018 calendars. You can preorder the calendars for $20 each or $27 for a variant cover at www.shopamalea.com. Ama Lea will also be signing calendars at the Mystic Museum in Burbank November 4, and with all the models at Dark Delicacies December 2.

Franchise Fred: When you approach Stranger Things, which is a very new phenomenon, how did you choose the iconic image you wanted to recreate for that?

Ama Lea: Obviously, everybody loves the show and it’s kind of started by nostalgia already. I chose it because I really wanted to do Winona. I thought the most iconic images from here were the ones of her on the couch in front of the Christmas lights. That’s how I started and I tried a lot of different things on the day of the shoot with the model to create what we did.

FF: Who is the model in that?

AL: Her name is Cassandra Leon. She’s an actress. SHe’s been in a lot of horror movies. 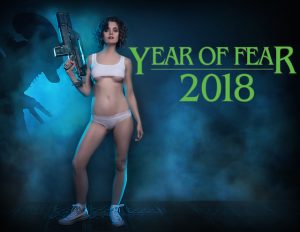 FF: Did she get the Stranger Things scene right away or did you have to direct her?

AL: No, she totally got it. She knew the show. We had a lot of fun with it.

FF: Of all the Dream Warriors, why did you pick Taryn for Year of Fear?

AL: Kind of approaching the calendar in general, I wanted to do badass, fully fleshed out women. To me, out of the entire Nightmare on Elm Street franchise, Taryn stood out to me with her big line, “In my dreams I’m bad, and beautiful.” She just encompasses all that’s badass about female characters in horror. She was one of the first characters I was like, “I have to do this one.” 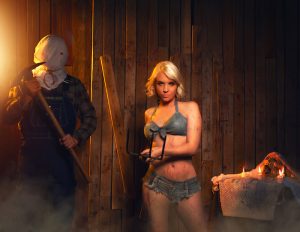 AL: To me, I feel like before her or even after, final girl characters have this way of being very bland, meek and mild. To me, it kind of feels like it’s every dude’s dream girl, being this unassuming sweet thing. She was smart and she was badass. To me, she was smarter than him and she outwits him. She’s my favorite final girl ever so when I was 14 and had AOL Instant Messenger, my screen name was XGinnyxFieldx. I adore her.

FF: Why did you cast yourself in Misery? 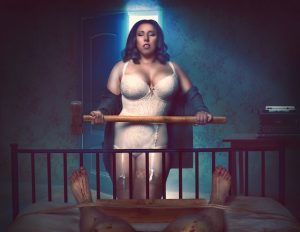 AL: Nathaniel Iman, a producer, we did a ton of conventions and stuff last year for the guys calendar. We realized early on that there were a lot of people who knew me as a model because I’ve been in front of the camera way longer than I’ve been behind it. They’d show up at conventions and be like, “Oh, I really wanted pictures of you to sign.” We’d have to actually run out, at our first convention, and print a bunch of stuff. So we knew they were bringing them. He was like, “You know, you have a fan base as a model.” I was like, “ I don’t want to do that, man. I’m old. No one wants to see that.” He twisted my arm and it ended up being super fun. I can really embrace that character.

FF: Did you have any other options?

AL: No. If I’m going to do it, I want to be Annie Wilkes. I’m from Maine, originally actually from Bangor, Maine so Stephen King is very near and dear to my heart. I don’t want to be skinny. Give me somebody that I could actually play. 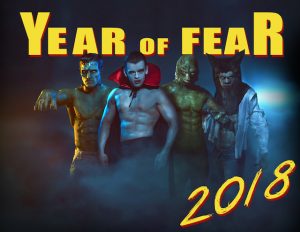 FF: When did you come up with the idea to cast the men as the Universal monsters for Year of Fear?

FF: Were the Universal monsters sexy in their day?

AL: The original ones? I always thought Bela was kinda hot.

FF: Do you do any more mashups in Year of Fear like The Creature From The Black Lagoon and Baywatch? 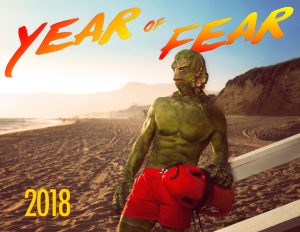 AL: We did a sort of Rockabilly Fonzie Dracula in a diner with a blood milkshake. Then we did a Christmas Crypt Keeper. He’s very special.

FF: How much makeup did you have on your Crypt Keeper?

FF: If it’s six hours of makeup how long do you end up shooting an average Year of Fear shoot?

AL: Honestly, when I shoot, it’s probably about equivalent to a roll of film. I started out in film, about 24 shots, but I don’t take a ton of pictures when I shoot. Sometimes it can be six hours of makeup for 10 minutes of taking pictures. 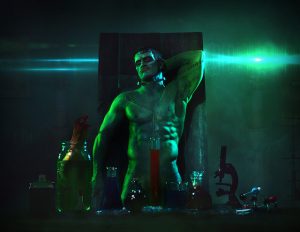 FF: What other photos are waiting for us in the Year of Fear calendar?

AL: Let’s see, the girls calendar, there’s The Loved Ones, there’s Queen of the Damned. We did Candy Girl from The Purge 3, we did Audition. For the guys, we’ve got Dracula, Frankenstein, Creature from the Black Lagoon. Again, it’s not just Universal. We kind of did our own versions of everything so our Wolfman is more like The Monster Squad Wolfman. We did Phantom of the Opera, Crypt Keeper, Sleepy Hollow we did The Headless Horseman, the Mummy. 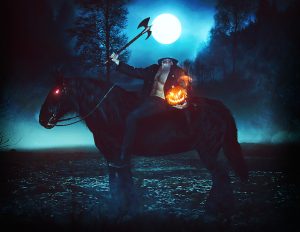 FF: Was The Headless Horseman just a matter of photoshopping the head out?

AL: We had to do a bunch of different things for that. We shot in a field, on a ranch, on this giant horse, a real horse with the guy on top. We had to do the CGI stuff like painting his head green and doing stuff with the color, a big piece over his head to have a bloody collar. That was actually the hardest shoot by far. He was a trooper. 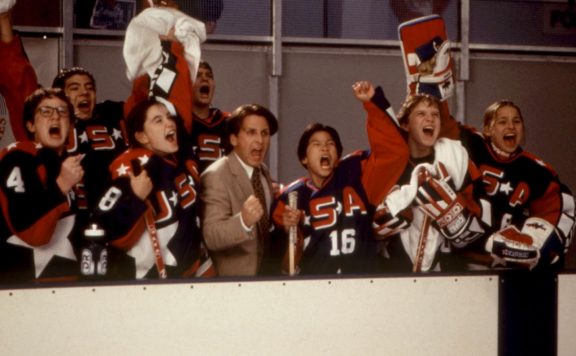