Back when The Incredibles came out it seemed like every Pixar movie had a profound theme to go along with its clever world within ours. They still do that on occasion with Inside Out or Coco but there are just as many that are simply animated comedy adventures like The Good Dinosaur and Cars sequels. Incredibles 2 is a fine adventure with the superhero Parr family, but the characters don’t really evolve, or even retain the lessons they learned in the first movie.

I don’t think I’ve watched The Incredibles more recently than its Blu-ray release in 2005, but didn’t the Parrs learn to work together as a family? At least the parents learned that their children were capable enough to join them on superhero missions. Incredibles 2 has them right back to sending the kids away while the grown-ups fight. I guess it’s true of parents that it takes more than one breakthrough to get them to change. The protective instinct will always be there, but that’s not really why Bob (Craig T. Nelson) and Helen (Holly Hunter) are sending their kids away.

I guess they never made superheroes legal at the end of the first movie. The Incredibles just defeated Syndrome but hadn’t changed hearts and minds. Incredibles 2 suggests an interesting idea where the superheroes are actually useless. They cause expensive damage and don’t catch the villain, when insurance could have covered the villain’s bounty and there’s an infrastructure in place for the occasional supervillain. The film never goes anywhere with the question of what if doing nothing is better than interfering? I would love to see a movie about why doing something good for its own sake is worthwhile.

Instead of dealing with the further development of the world The Incredibles already established, Incredibles 2 introduces new characters Winston (Bob Odenkirk) and Evelyn Deaver (Catherine Keener), who want to convince the government to make superheroes legal again. They say “make superheroes legal again” at least twice, which is a strange similarity to Donald Trump’s campaign slogan. Presumably, it would be good for the Parrs and the world to make superheroes legal, but I doubt the artists of Pixar are endorsing Trump. Then why use such a similar phraseology when any other words would suffice? 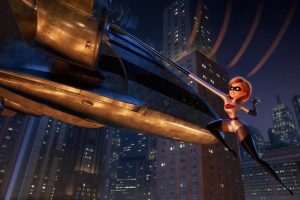 Anyway, the Deavers send Helen out with body cams to show the world how effective her superheroics are, and her action sequences are great. Action sequences with trains and helicopters find clever ways to use Helen’s elastic powers, and climactic action sequences incorporate all the superheroes’ powers cooperatively.

Leaving Bob home with the kids is somewhat cliche fish out of water comedy, but it’s well-intentioned. The film is not subtle about Bob’s need to be super again. Even when he says he wants to do it to help the kids, it’s clearly for his own ego first and foremost. Didn’t he have a profound Joseph Campbell moment in The Incredibles when he realized that his family was in danger all by his own doing? I mean, it’s possible Brad Bird only remembers the first Incredibles as well as I do, but I think the creator of the sequel has a larger responsibility to follow the character development than the person simply watching the sequel does.

Normally the villain’s plan can be basic to set up the need for superheroes to stop them, but when they try to get more complex they really ought to make sense. The villain has a beef with superheroes, but superheroes are already illegal. If he just did nothing, he’s already won. 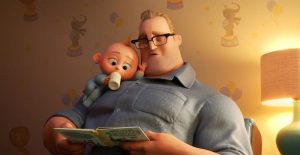 So Incredibles 2 is a fun ride with lots of comedy including an impeccable spit take. The Parrs are in pretty much the same place at the end that they started, which is a regression from the first movie still. I guess they showed that they can stop a villain after all, but is that all we want out of an Incredibles movie?

If there were five Incredibles this would be perfectly fine. It would surely be among the top three Incredibles adventures. When there’s only two, it can only exist as the lesser sequel. That’s why it’s good to make lots and lots of sequels. That way it spreads the wealth across the franchise and there’s more comparison. But that also sets the stage for Incredibles 3 to return the franchise to its glory and make Incredibles 2 the filler in the middle.

Back when The Incredibles came out it seemed like every Pixar movie had a profound theme to go along with its clever world within ours. They still do that on occasion with Inside Out or Coco but there are just as many that are simply animat...
0
Average User Rating
0 votes
Please sign in to rate.
Cast:Craig T. Nelson, Holly Hunter, Huck Miner, Samuel L. Jackson, Sarah Vowell
Director(s):Brad Bird
Writer(s):Brad Bird
Genre:animation, Family, Superhero