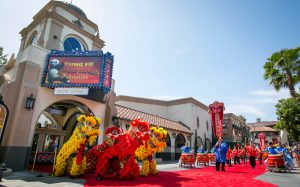 Franchise Fred approves theme park spinoffs of movie franchises. They may not be canon but they give us another short entry in our favorite stories. Even better, they usually give us a chance to be IN our favorite franchises. Back to the Future: The Ride is the closes we’ll ever get to Back to the Future IV and we got to ride in a DeLorean. Terminator 2 3-D: Battle Across Time is one of the top five Arnold movies and we got to survive the future war. For kids who love Kung Fu Panda, The Emperor’s Quest will let them feel like they’re on an adventure with Po (Jack Black), if not doing spin kicks themselves (surely their parents will have to stop them from doing that in the queue).

Like any ride, Kung Fu Panda: The Emperor’s Quest begins with safety instructions disguised in character dialogue, and setting up the plot of the show. Here it gives the Dreamworks Animation characters a shared universe in which to interact. Cameos by Donkey, the Trolls and Madagascar animals may not make sense in the films’ continuity, but they get to be funny together. 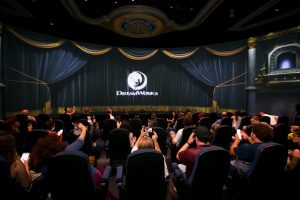 Po (Jack Black) addresses the audience directly. He needs warriors to join him in delivering the Liquid of Ultimate Power to the Emperor. That is the plot of the short motion simulator, and the audience gets to ride on a raft with Po, Shifu and Mr. Ping on rocky waters, down waterfalls and into the spirit realm.

The theater seats perform a limited array of motions. The rapids rock and vibrate gently. Fortunately there’s no back punch like 4DX. The screen also expands to a full 180 degrees several times during the adventure, sort of like ScreenX. That makes the Dreamworks Theater the first to combine motion simulation and expanded screens. 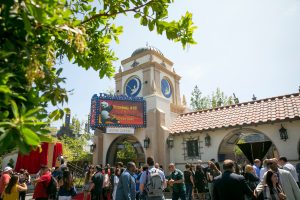 As a five minute Kung Fu Panda short, The Emperor’s Quest packs a lot of martial arts and adventure into its run time. The animation doesn’t quite look like the feature films. It has more of a video game feel to the motions, although rendered at full cinematic quality. Perhaps it utilized more motion cycles and loops than organic animation, or maybe it need to be a different frame rate for the theater.

The most exciting thing about the Dreamworks Theater is that the programming is designed to change. So whatever the next big Dreamworks animation franchise is could get its own show to replace Kung Fu Panda: The Emperor’s Quest. There’s potential for many more franchises to feature immersive experiences at Universal Studios!