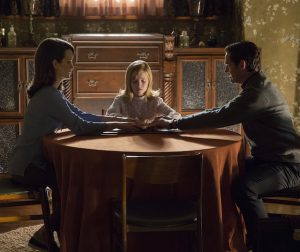 Here is where I really have to put my money where Franchise Fred’s mouth is. Ouija was not a good movie, but they made another one so would the very nature of adding to the story make it more interesting? To further complicate matters, Ouija: Origin of Evil is a prequel. I don’t like prequels. They don’t move the story forward since they only tell things that happened before the first one. But if the original sucked, could the prequel actually be the good one? Yes.

In 1967, Alice Zander (Elizabeth Reaser) and her daughters Lina (Annalise Basso) and Doris (Lulu Wilson) run a scam psychic business out of their house. When Alice adds a Ouija board to her schtick, Doris begins to actually communicate with the spirit of her dead father.

I suppose if I really remembered Ouija 1 well, I’d remember things about their house and family that would tell me where the story was going. But I don’t so Ouija: Origin of Evil felt like a brand new story that just happened to be a period piece. Seeing the pre-1990 Universal logo at the beginning made me very happy (even with the modern “A Comcast Company” credit anachronistically included), as did other old artifacts of bygone eras of film.

Regardless of its connection to Ouija, Origin of Evil is a Mike Flanagan/Jeff Howard film.  The makers of Oculus just happened to be handed a franchise entry and they made a Flanagan/Howard film out of it. They play the scares with a devilish wink. Like when Lina’s friends first play Ouija, her friend Betty (Alexis G. Zall)’s reactions are adorably sincere. There are still jump scares with loud sound effects, but the loud noises are so extreme it’s made by and for people who know the game. And there are plenty of scary images, if elongated mouths and black figures are the sort of things that scare you.

What makes Ouija: Origin of Evil a legitimate movie upon which to hang those scary jolts is that it earns the emotion of a family grieving, hoping they’ve actually discovered a miracle. It’s still a generic Ouija board movie with exposition about the history of the spirits, but it’s a better one than I’ve ever seen before. The film’s greatest achievement was that I genuinely did not want any of the characters to die. In a horror movie, that’s something. I actually liked them and wanted things to work out for them. Although one moment of bully payback is highly satisfying. It’s presented so playfully it’s not even grotesque.

It’s also a testament to Reaser, Basso and Wilson that we care so much about their characters, Henry Thomas as the kindly priest Father Tom and Parker Mack as Lina’s suitor. Wilson is scary too, but hearing the name Doris said so much made me really want to see a sequel to True Lies with the further adventures of super spies Boris and Doris. Anyway, Franchise Fred approves Ouija: Origin of Evil. They really turned this ship around!

[caption id="attachment_32368" align="alignright" width="300"] Doris (Lulu Wilson) leads the Ouija.[/caption] Here is where I really have to put my money where Franchise Fred’s mouth is. Ouija was not a good movie, but they made another on...
0
Average User Rating
0 votes
Please sign in to rate.