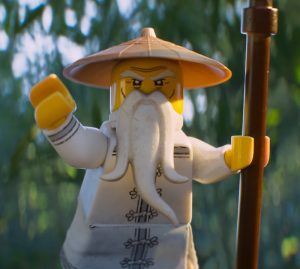 It is with a heavy heart that Franchise Fred disapproves The LEGO Ninjago Movie. It lacks the depth and creativity of The LEGO Movie and The LEGO Batman Movie, although there were a few moments that made me smile.

Lloyd Garmadon (Dave Franco) is the son of evil villain Garmadon (Justin Theroux, sounding like Will Arnett). His classmates shun the son of the tyrant who frequently terrorizes the city of Ninjago, but they don’t know that Lloyd’s secret identity is the Green Ninja. Lloyd and his five other ninja friends battle Garmadon while training under Master Wu (Jackie Chan).

I had a bad feeling when LEGO Ninjago revealed its LEGO world. The opening logos are great for martial arts fans, but once the movie proper begins it relies much more on generic pop music (the kind that “Everything is Awesome” was satirizing), famous needle drops and real celebrity cameos than any of the other LEGO movies needed. It’s jangling keys at the kids which is beneath the LEGO brand. 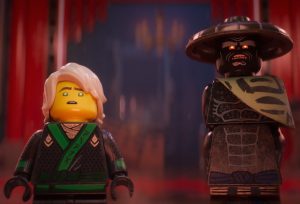 The father/son theme between Lloyd and Garmadon feels way too obvious. The LEGO Movie was able to reveal itself to be a father/son story but here it’s completely on the nose. Lloyd is flat out begging for his father’s attention in act one. It’s pretty one dimensional compared to previous LEGO protagonists. Emmett was so determined he even found the positive in being ostracized, and we all know how deep Batman’s issues go.

They should have stuck with the high school story. Do LEGO Mean Girls for boys. How does the son of an infamous celebrity prove he’s not his father and make friends? That’s a cliche too but it’s a more provocative one than trekking through the jungle to find a weapon to defeat Garmadon.

The five other ninjas are complete blank slates. When Master Wu explains all their powers, each has their own element, but Lloyd’s is green. How much you wanna bet you know what green power turns out to be? Lloyd actually points out the cliche of that moment, but the film does not seem self-aware of how cliche its overall theme is, which makes it a brick that doesn’t fit in the LEGO Movie canon. Also, how literal do you think Master Wu’s advice about “the right path” will be? 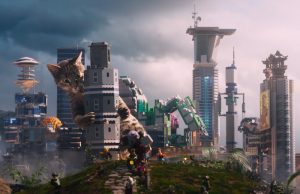 The ultimate weapon is clever. The fast cut martial arts movie montages have some fun references. Unfortunately, anachronistic pop culture jokes land with a thud and point how how much the plot needs distractions.

LEGO Ninjago is also just too long. The other LEGO Movies could be over 90 minutes because they were filled with depth and levels of comedy. There’s no reason for LEGO Ninjago to take longer than 90 minutes to wrap up. The energy of the children in the audience seemed to wane once the loud noises and bright colors gave way to the generic plot.